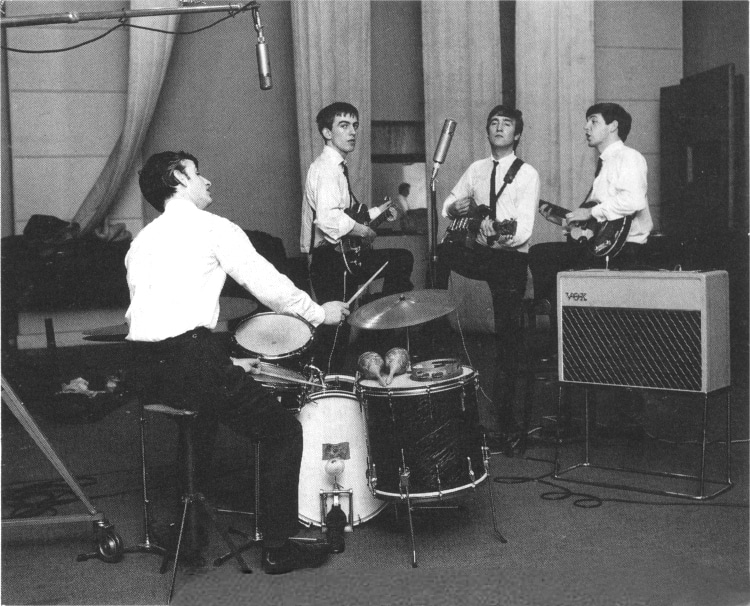 In 1961, Hayley Mills starred in the film, “The Parent Trap,” whose theme song employed a catch-phrase, soon to be echoed by our own Fab Four, in 1963.  In the Disney film, twin daughters (both played by Mills) scheme to see that their estranged parents will try to “get together, yeah, yeah, yeah!”. Of course, by the end of that production, the twins (and the clever screenwriters) achieved a happy ending. The parents were remarried; the girls, reunited, and the phrase “yeah, yeah, yeah” was fondly ingrained in our memories. But all “triple-yeahs” aside, there is a more important link between The Beatles and “The Parent Trap” theme song…that being, of course, togetherness.

In The Anthology, John Lennon wrote: “Once upon a time, there were three little boys called John, Paul, and George, by name christened. They decided to get together, because they were the getting together type. When they were all together, they wondered what for, after all, what for? So, all of a sudden, they all got guitars and formed a noise.”

Indeed, being together was the very essence of The Beatles. And each September that they experienced as a group found them reuniting to tour, to record, “to form a noise,” and to have fun doing it. Let’s look back on some of those precious moments.

September 1960 – The Beatles in Hamburg for the first time

After hounding Liverpool’s charismatic impresario and Jacaranda Coffee House owner, Allan Williams, to get them a gig in Hamburg, Germany, The Beatles were finally on their way to the port city’s bright lights. Unbeknownst to Williams, his boys were booked on “the dark end of the Reeperbahn” in a seedy strip club called The Indra. But in only weeks, the hardworking Beatles had transformed the vacant dive into a hot spot, and they were promoted to the burgeoning Kaiserkeller. Sharing the boards in “the ’Keller” with Rory Storm and the Hurricanes (and their suave, gregarious drummer, Ringo Starr), The Beatles quickly adopted a vast catalogue of new music and learned how to mach shau…put on a show! By the time John, Paul, George, and Pete returned Merseyside in the winter of 1960, they were a highly-honed stage band. Together, they had become, as Neil Aspinall would call soon them, The Fabulous Beatles.

September 1962 – The Beatles in EMI recording “Love Me Do”

Having very recently acquired cool Ringo Starr as their new drummer, September 1962 found The Beatles hard at work in London’s EMI Studios, trying to earn “the break of a lifetime.” They had traveled to “The Smoke” (London) to record their first real record. And although accomplished producer, George Martin, wanted the skinny Liverpool boys to perform the Tin Pan Alley song, “How Do You Do It?”, The Beatles were dead set on “Love Me Do.” Assuring Martin that they “could not return to Liverpool” having recorded “How Do You Do It?” without being laughed off the quay, The Beatles stuck to their guns. However, the original number — that featured John Lennon on mouth organ and lyrics — was tricky. “You simply can’t play the harmonica and sing as well, John,” Martin had objected. “It will come out as “Love Me…Wahhh.” So, reluctantly, Paul McCartney assumed the lead vocal role. And “ta-dah!!!” Only four weeks later, “Love Me Do” rocketed to Number 17! Not bad for a first-time session with a new drummer, a new producer, and a new studio. Getting together equaled a brand-new sound!

Chuck Gunderson in Some Fun Tonight: The Backstage Story of How The Beatles Rocked America: The Historic Tours of 1964-1966 said it best: On the 1964 North American Tour “…The Beatles would play a staggering thirty-two shows in twenty-six venues in twenty-four cities in just thirty-three days.” (p. 14) Talk about togetherness! And ah, the memories they made! They sang goose-bumpy harmony in the shimmering amphitheater of the Hollywood Bowl. They echoed over the rugged landscape around Red Rocks. They brought mayhem to Montreal and the New Orleans City Park. They diverted around Hurricane Dora and discovered new friends down in Key West. And unexpectedly, they gave Kansas City a raucous medley that furnished the “two extra songs” Charlie O. Finley craved. Gunderson writes, “No musical act before or since will ever rival The Beatles on their incredible groundbreaking tour of 1964. John Lennon, Paul McCartney, George Harrison, and Ringo Starr not only would leave an indelible impression on their fans in the United States and Canada, but would leave the fans hungering for more in 1965.” (p. 14) And they did it all, together.

Magical Mystery Tour was, for John, Paul, George, and Ringo, a crucial restorative process. In the aftermath of Brian Epstein’s tragic death, it gave them “a way forward.” It was a project to bind them —one to another — to employ their talents and creativity, and to keep them close together, both physically and in spirit. According to our Beatles Guru, Mark Lewisohn in The Complete Beatles Chronicle, the Magical Mystery Tour recording sessions commenced on 5 September with the 7.00 p.m. – 1.00 a.m. EMI Studio One recording of “John’s glorious ‘I Am the Walrus’” (p. 261). And the grand filming event began on 11 September and concluded 24 Sept 1967.  Throughout this grief-laden month, the necessity of rising each morning and being productive each day, whilst surrounded by dear friends (Freda Kelly, Neil and Mal, Victor Spinetti, etc.) helped to assuage The Beatles’ pain and to focus their energies on what would be rather than what had been.

No clearer example of “We’re Better Together” can be given to us than The Beatles in their shared Septembers. Despite worldwide pandemics, economic crises, and fiery political divisions, we need to reach out to one another and seek bonds not barriers. September is a month for finding our own harmony, our own new horizons, and our own way forward. Together the boys always found a way to shine on…and so can we.

To hear the adorable song “Let’s Get Together, Yeah, Yeah, Yeah!” performed by Haley Mills and her double, Haley Mills for “The Parent Trap,” go here.