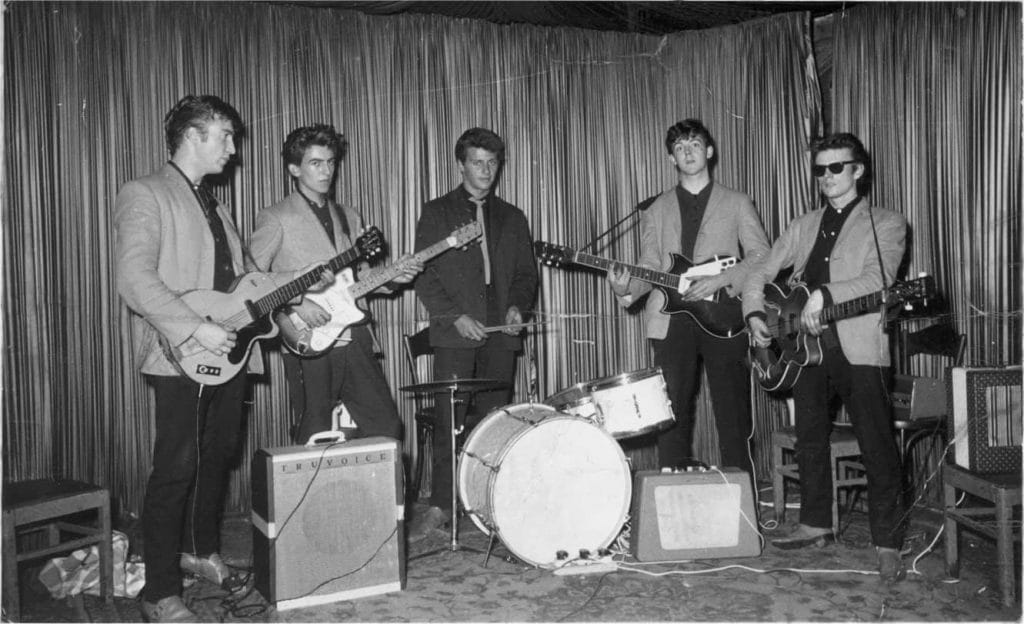 We’re halfway through our year-long in-depth trek with The Beatles, month-by-month, reliving their most outstanding events and observing life patterns in their days together. We’ve seen how their Aprils taught the lads to balance loss and hope. Their Junes together offered lessons in determination. And Julys, for The Beatles, were times of seeking joy.

1960…The lads’ first trip to Hamburgy-berg — After badgering their first manager, Allan Williams, to get them a gig in Hamburg, Germany, where other Merseyside Bands (such as Derry and the Seniors) were already performing, The Beatles were finally off to the Hook of Holland and a long road ahead towards Hamburg’s famed red-light district. Getting a job on “the dark end of the Reeperbahn” in a seedy strip club, The Indra, the boys ginned out such magnificent rock’n’roll that they were quickly promoted to the better-situated Kaiserkeller. Without a doubt, the three-and-a-half months that John, Paul, George, and Pete spent in Hamburg, (yes, Ringo was there as well, but with Rory Storm and the Hurricanes) shaped them into a one-of-a-kind, blockbuster band. Playing four-to-six hours a night with only scant breaks, they developed musical acumen, stamina, and most of all, the ability to mach schau! August 1960 was a game changer for The Beatles.

1962…Pete leaves the band; Ringo joins Beatles; Cynthia and John wed — John had been the one obstacle in Paul and George’s plan to release drummer Pete Best and to acquire “the coolest drummer in Liverpool” in their opinion, Ringo Starr. In August 1962, with John’s attention focused on his upcoming nuptials to long-time girlfriend, Cynthia Powell, John’s bandmates finally swayed him into seeing their side of the coin. Traveling to Butlin’s Holiday Camp for a brief meeting with Ringo (Rory Storm and the Hurricanes’ talented drummer), Paul and John invited Starr to join The Beatles. And happily, his answer, was, “Yes!” By 18 August, Pete was a part of Beatles history, and Ringo was sitting at the rostrum on the Cavern Club stage. This one move changed Beatle dynamics forever as Ringo became the star of both “A Hard Day’s Night” and “Help!” and added so much whimsy, gentle humanity, and powerful backbeat to the Fab Four. The changes of August 1962 had far-reaching implications.

1965…The boys play Shea Stadium and meet “The King,” Elvis! — John Lennon had always vowed that “Before Elvis there was nothing.” Indeed, his earliest rock’n’roll memories involved hearing “Jailhouse Rock” on the vacillating late-night airwaves from Radio Luxembourg and on his mother’s record player. Styling his hair like “Mr. Presley” (as Mimi called him), John dreamed of making his living with the guitar as well. In fact, he set his sights on being “bigger ’n Elvis.” So, John was thrilled when The Beatles’ limo rolled up to 1174 Hillcrest Drive, Beverly Hills, for the August 1965 meeting with The King of Rock’n’Roll. Elvis, however, was not as elated. In fact, when The Beatles entered his “den,” Elvis said almost nothing to them. And ill at ease, the lads said nothing in return. Not until Elvis announced that if The Beatles didn’t want to talk, he was going to bed, did the ice break. Over drinks and pizza, they discussed everything except the fact that these “jokers” had stolen “the king’s thorny crown.” For several hours, they were just musicians, sharing their mutual talents. Journalist Ivor Davis, who was present that night, shared his vivid experiences with us at the Virtual Fest for Beatles Fans. If you missed the Fest, you can hear Ivor take you back to August 1965 here:

1966…The Beatles deal with John’s “Jesus” comments and decide to cease touring — In the angry backlash of John Lennon’s completely out-of-context comments about The Beatles being “more popular than Jesus” printed in Datebook magazine, The Beatles arrived in America for their 1966 North American Tour. None of the boys — well, with the possible exception of Paul — were eager to tour anymore. George, especially, hated going on the road. But faced with Beatle burnings, angry protest placards, and the public expectation that John would apologize at every single press conference along the tour gamut, the boys felt anything but happy. It was with great relief for George Harrison, then, that at the close of the boys’ San Francisco concert in Candlestick Park, he could announce, “That’s it! I’m no longer a Beatle!” The days of touring were certainly over. And the “new Beatles” — a studio group — would take a completely different direction from the exuberant, bow-at-the-waist, aim-to-please stage band. August 1966 was clearly the end of an era.

1967…The Beatles meet the Maharishi but lose Brian — Whilst The Beatles were off in Bangor, North Wales, listening to words of wisdom from the Maharishi Mahesh Yogi, their beloved manager, Brian Epstein, died from an accidental drug overdose. And as soon as the boys heard the tragic news, they realised that this monumental loss signaled a permanent change in who they were and who they would become. Brian had not only been their manager — he was, in many ways, a “dad” to them. He was their advisor, friend, and biggest fan. Brian had stood in the wings of almost every concert, television show, and interview they’d ever done. While managing a huge stable of NEMS artists, Brian had always, always (according to both Tony Barrow and Ray Coleman) put The Beatles first. From 9 November 1961 on, The Beatles had claimed Brian’s heart. August 1967 touched all of The Beatles’ lives in an irrevocable way. No one would ever begin to replace Brian Epstein. It just wasn’t possible.

Without a doubt, over and over again, events in The Beatles’ Augusts were milestones…they were directional occurrences, moving the four friends down one important path after another. This month, our Fest Family defeated the isolation of CoVid-19 to “come together” at the Virtual Fest for Beatles Fans. And it was so successful that we’re planning to do it again in October for John Lennon’s 80th birthday. Although we will ALWAYS want to gather together physically, we saw the huge success of our virtual fest as a road sign, pointing us to the future…and reminding us that, no matter what happens, we will always be connected. Like John, Paul, George, and Ringo, in many of these pivotal moments, we will always find a way to SHINE ON!