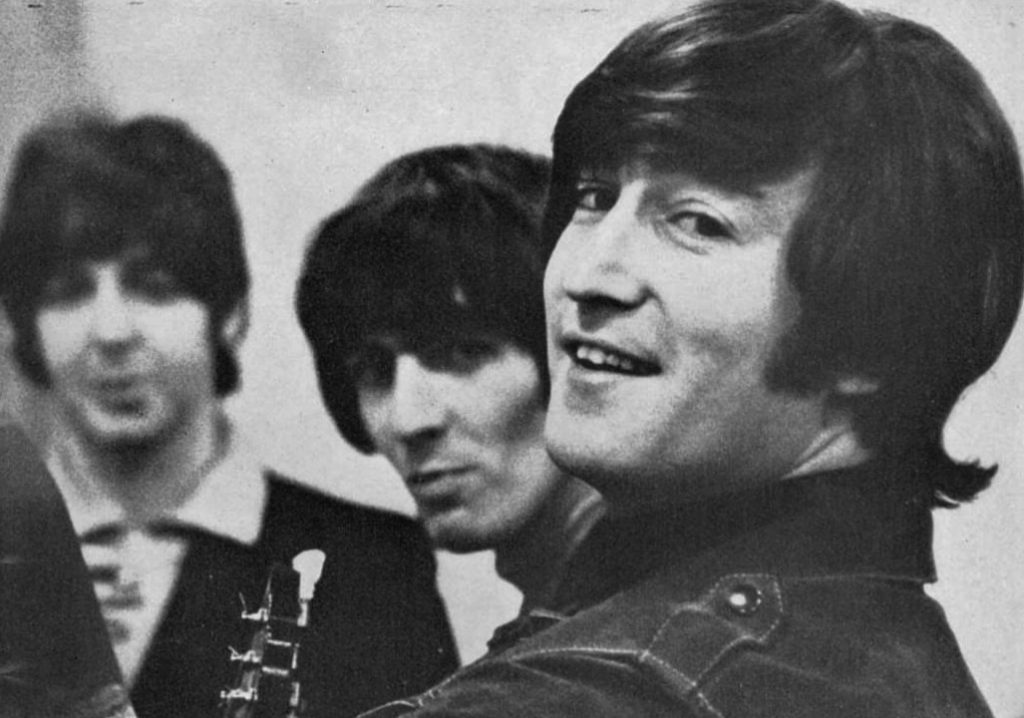 Throughout 2021, the Fest for Beatles Fans blog has been exploring the intricacies of The Beatles’ transitional 1965 LP, Rubber Soul. This month, our Fest friend Robert Rodriguez, award-winning author of Revolver: How The Beatles Reimagined Rock’n’Roll and Solo in the 70s: John, Paul, George, and Ringo (1970-1980), as well as distinguished podcast host of “Something About The Beatles,” joins Jude Southerland Kessler, author of The John Lennon Series, for a fresh, new look at the exciting second track of Side Two of this remarkable LP.

Stats: Recorded in only two takes. “Best” take was Take 2. However, three superimpositions were needed to complete the song. One for Lennon’s lead, one for backing vocals by Paul and George, and the last for George’s concluding solo.

Thanks to Jerry Hammack and his superb The Beatles Recording Reference Manual, Vol. 2, for this information.

George Harrison’s striking concluding lead left experts guessing about its creation for years. Early accounts of the 11 November recording session had Harrison playing a Greek instrument, the bouzouki. Even George Martin, at one point, said that he remembered Harrison performing the song’s concluding solo on that instrument. (Spizer, 202) Later, however, Paul McCartney just as adamantly averred that he recalled Harrison using his guitar with the capo placed very high on the neck to produce the unusual and tinny bouzouki sound. Barry Miles quotes Paul as stating, “We did it on acoustic guitars, not bouzoukis.” (Paul McCartney: Many Years From Now, 119-120) Whatever the methodology, the effect was (and is) singular and enchanting.

As Kenneth Womack observed in Long and Winding Roads: The Emerging Artistry of The Beatles, “Simulating a bouzouki-like sound on his Hootenanny, George play[ed] an intricate Greek melody that afford[ed] the track…an Old World resonance.” (p. 122) Rubber Soul had already introduced the sound of the sitar in “Norwegian Wood.” Now, the tone and cadence of another little-known instrument was introduced to listeners by the adventurous Beatles. As the boys moved decidedly away from the “pop” sound that was their staple as late as early 1965, the inclusion of innovative, world music was rapidly becoming John, Paul, George, and Ringo’s “new normal.” (See the chart entitled “Population of The Beatles Early and Experimental Style Features” in Dr. Walter Everett’s The Beatles as Musicians, The Quarry Men to Rubber Soul, p. 311. Also, please read Dr. Everett’s list of instruments that were in the studio during the Rubber Soul sessions on p. 310. The leap into experimentation is dramatic with the advent of Rubber Soul and enhanced with Revolver).

Now, for a “fresh new look” at “Girl,” we turn to author Robert Rodriguez, who invented the Fab Four FAQ series, recently hosted the very successful online conference Fab4ConJam, served as “Featured Author” at Beatles at the Ridge, and has been a beloved Special Guest Speaker at The Fest for Beatles Fans for years. Jude Southerland Kessler recently sat down with Rodriguez to discuss Lennon’s innovative and personal composition, “Girl.”

Jude Southerland Kessler: Robert, it’s a joy to get to work with the remarkable author who opened my eyes to the real significance and importance of Revolver via your incredible book Revolver: How The Beatles Reimagined Rock’n’Roll. That book completely changed my whole perspective on the LP…for the better. It’s a book everyone should read!

But our focus today is on Revolver’s predecessor, Rubber Soul, and specifically on the track, “Girl.” So let me ask you, early on, many listeners assumed that the “sizzle-sound” following John’s intonation of the word, “Girl!” was the sound of a cymbal. Of course, now we know it’s the sound of John’s audible inhale. Tell our readers, if you would, what Norman Smith did to create that vocal effect: the sound of ecstasy.

Robert Rodriguez: For the second time during the production of Rubber Soul, The Beatles requested an unusual manipulation of the EQ to distort the sound; again – as they had with the guitars on “Nowhere Man” – boost the treble up high, creating a sound from John’s intake of air that nearly matched the sound of Ringo’s brushed cymbal work. It is entirely likely that they were simply looking for a cool new sound to add to the track to give it an air of distinction and weren’t going for a particular evocation. However, given that this was the “pot” album, as compared to Revolver, the “acid” album, it would be naive to ignore the possibility of the effect as emulating taking a hit on a joint. The Beatles loved to sneak little inside jokes into their recordings, and in the case of “Girl,” this naughty touch alongside the backing vocal part on the bridge would’ve doubled their (guilty) pleasure.

Kessler: “Girl” is a quite sophisticated song, musically. Naturally, the usual intricate Beatles harmonies are in play, but so much more is at work. Tel us about some of the instruments that are used to create an exotic sound.

Rodriguez: As was often the case throughout the Rubber Soul sessions, The Beatles and their producer – though squeezed for time to write and record the album by deadline – would experiment with ideas to broaden their sonic palette. To their credit, simply having an idea didn’t justify using it; it had to be a good idea to make the final cut, and The Beatles’ recordings are evidence enough of the superb quality control standards they adhered to. Perhaps the ultimate example of this is “12-Bar Original” – a recording that they took seriously enough to spend precious studio time on, rehearsing and tracking a pair of takes before abandoning the experiment as an unremarkable failure.

“Girl” provides a further example of this thinking, in that we now know that though the final released performance features acoustic instrumentation (excepting Paul’s bass), a fuzz-distorted Harrison electric was tried out, but ultimately rejected. (A similar idea was tried out four years later for “Here Comes The Sun” and thankfully shelved). Maybe it was because they came up with a better idea: a sound that has been described by writers who should know better as a Greek bouzouki — an exotic stringed instrument not typically heard much on pop records.

But while the origins of the sound may be Greek-inspired (Paul has said as much), it was actually performed by George on his Framus Hootenanny 12-string guitar. The attack of his picking the strings is sharper than usual, giving a staccato effect (with no ringing out), suggesting an austere sonic tone that matches the lyric describing the title character’s early Christianity teachings: that heaven was for those who suffered deprivation. It’s a brilliant touch that we as listeners can come up with any number of creative suggestions for what the intent behind it was, when – per Occam’s Razor – it was probably nothing more profound than a pleasing sound that was fresh at the time.

Kessler: Cynthia Lennon once said that this song was about her. In April 1995’s Q magazine, she said, “The only song that I thought might be something to do with me was ‘Girl,’ but of course John isn’t here to say anymore.” However, when asked about “Girl” during his life, John claimed that the song was about an ideal girl (although this girl is far from ideal in many ways), a girl who turned out to be Yoko. Once, he stated that the description of the girl in the bridge referred to the Christian church. What’s your take on the identity of this “Girl”?

Rodriguez: Honestly, I find it difficult to understand why any woman would choose to identify with the character described in this song: she’s punishing and apparently warped by early years of religious education. But someone better qualified in psychoanalysis than I can probably provide a more satisfactory answer as to why John identified the character in this song as a “dream girl,” though technically nightmares are dreams, too. As described, the decision to keep this woman around (though he characterizes the choice as hers: “the girl who came to stay”) comes with ambiguity: he’s clear-headed enough to recognize his desire for her as something punitive (“…makes you sorry”), yet he is without regrets. That alone suggests a desire to be punished, which aligns nicely with her own worldview, shaped by the church, that states “pain will lead to pleasure.” Thus, John is describing a situation where he accepts day-to-day unhappiness and being made to feel a fool by her (and in front of his friends, no less) by a woman incapable of graciously accepting a compliment, all for the sake of a future reward, in this world or the next. John’s describing the “girl” he sings about as someone who “turned out to be Yoko” may be more revealing than he intended; he might inadvertently be indicating difficulties in a seemingly faultless relationship.

Kessler: Margotin and Guesdon claim that John waited 15 years to write the sequel to “Girl,” and that song was “Woman.” Robert, do you agree or disagree with this assessment and why?

Rodriguez: For something to be a “sequel,” it has to acknowledge its antecedent and either build upon it or deviate from it, does it not? I think Lennon was trying to come up with a compelling connection between the two songs, but I don’t hear it. Between the two, I hear “Girl” as the much more compelling composition: in addition to everything else it offers as a performance and as a recording, the lyrical ambivalence is a marvel to behold. There is much to unpack in its mixed signals – someone unpleasant and difficult as an ideal – and yet remaining the object of profound desire.

“Woman,” in contrast, is – to my ears anyway – much more facile and shallow, while seemingly striving for the perception of depth. (The opening remark about the other half of the sky sounds profound, without actually saying much of anything). The narrator in “Woman” gushes on and on about the debt of gratitude owed (“…for showing me the meaning of success” – was this a comment on Yoko’s financial acumen, handling their business affairs?) while lamenting his own ingratitude and thoughtlessness. The song takes on the air of a religious hymn, with offers of praise and loads of “I’m not worthy.” As such, it’s hard for me personally to enjoy to any great depth, or to see as anything more weighty than his myriad other mea culpa songs (“Jealous Guy,” “Aisumasen,” “Forgive Me (My Little Flower Princess),” etc).

By the end of his life, in the promotion of Double Fantasy, John projected an air of having figured life out: his relationship with Yoko as being some kind of summit of both ideal romantic love and a wholly-encompassing creative partnership. To me, it rings hollow, especially when contrasted with his former songwriting partner, who made the same point about his own life partner without loudly banging on about it; instead, providing an example that was as interactive with the world as John and Yoko’s was sealed off from it. Contrast this with the 25-year-old Beatle who, throughout Rubber Soul, describes deep social connections (“In My Life,” “The Word”) and his place in society (“Nowhere Man”), as well as a series of women who are apparently self-sufficient (“Girl,” “Norwegian Wood”) that he connects with. Personally, I know which artist I find more interesting.

To hear Robert’s podcast, “Something About The Beatles,” HEAD HERE