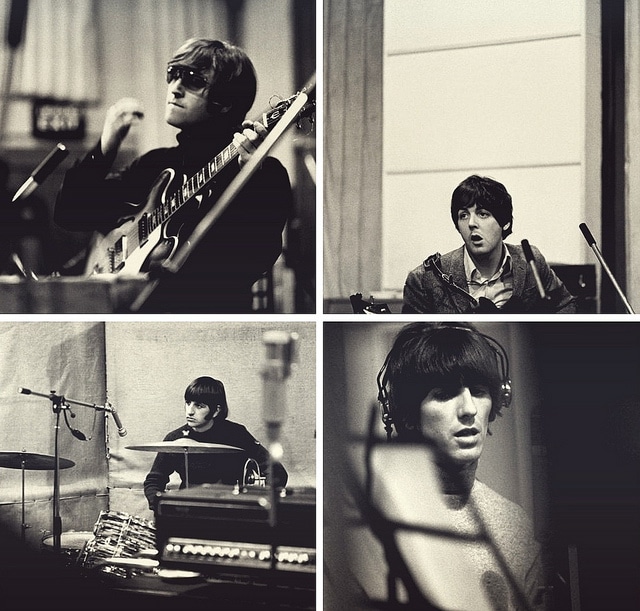 Revolver played out in the last clicking grooves of the album, and I turned to Emily Moss with a sigh. “John Lennon has lost his mind,” I shivered, quite mournfully. And we sat in silence.

Trying desperately to find something to like on the new Beatles LP, we played it over again – Emily and I latching on to “For No One” and “Eleanor Rigby,” even though we were dyed-in-the-wool “John girls.” We felt like traitors. We felt abandoned. “Tomorrow Never Knows” and “She Said, She Said” were train wrecks.

“Bloody awful,” Emily feigned in a British accent, pretending to be one of the Beatlettes. And I gulped and nodded.

Forty years later, I read Robert Rodriguez’s insightful book, Revolver: How The Beatles Re-imagined Rock’n’Roll, and at last, I got it!! I finally, finally understood the necessity for Revolver – the need for change and growth, the imperative for The Beatles to move beyond the “yeah, yeah, yeah’s” into a wider dimension of creativity. At last, I understood and accepted everything that happened, post-Rubber Soul.

People despise change. And I’m one of them.

Recently, Campbell’s Corporation changed the label on their “Pork’n’ Beans”…after 40 full years. I almost wept…although how that label affects me personally, I’m not quite sure.

And when I saw the utter remodel of The Grapes in Liverpool (it looks NOTHING like The Grapes that The Beatles frequented…nothing at all), I flew into a Mimi Smith swivet of the first order. Furious!

But without change, only one thing is certain: decay, death. We have to keep growing.

The Fest for Beatles Fans in New York and Chicago changed this past year. We added the Apple Jam Stage, the Faboratory, the skipping club, Beatles nap time, the Beatles hike, and more. We moved into new territory. Some people “read the Rodriguez book” (as I now say when I’m talking about coming into a new understanding of something), and they were on board with the additions to our standard fare. Others are still sitting at the turntable with Emily Moss, completely dismayed.

What The Beatles became with the advent of Revolver was a new band, a band with colors where their grey suits had once been, a band with foreign instruments where once there had only been harmonicas, drums, and guitars (with an occasional George Martin piano or two). The Beatles beat the box all to hell. They pushed away the boundaries of “same ole, same ole” and strode boldly into tomorrow.

And in pushing, experimenting, trying new things, and reaching out, they grew.

The usual is comfortable, and we still have much of that at The Fest. I’m solidly in the camp that still wants Mark Hudson to sing “Working Class Hero.” I LOVE it!!!! I still love the Marketplace, Liverpool’s concerts every night, Bob Abdou and the puppets, and the singing of “Hey Jude!” I cherish tradition. It frames me.

But “havin’ read the [Rodriguez] book,” I’m open to the possibility that the future may be better if we add, accept, adopt, and embrace more. Want to try? Anyone with me? Yeah? (yeah, yeah…)

One thought on “Lure of the Old, need for the New”