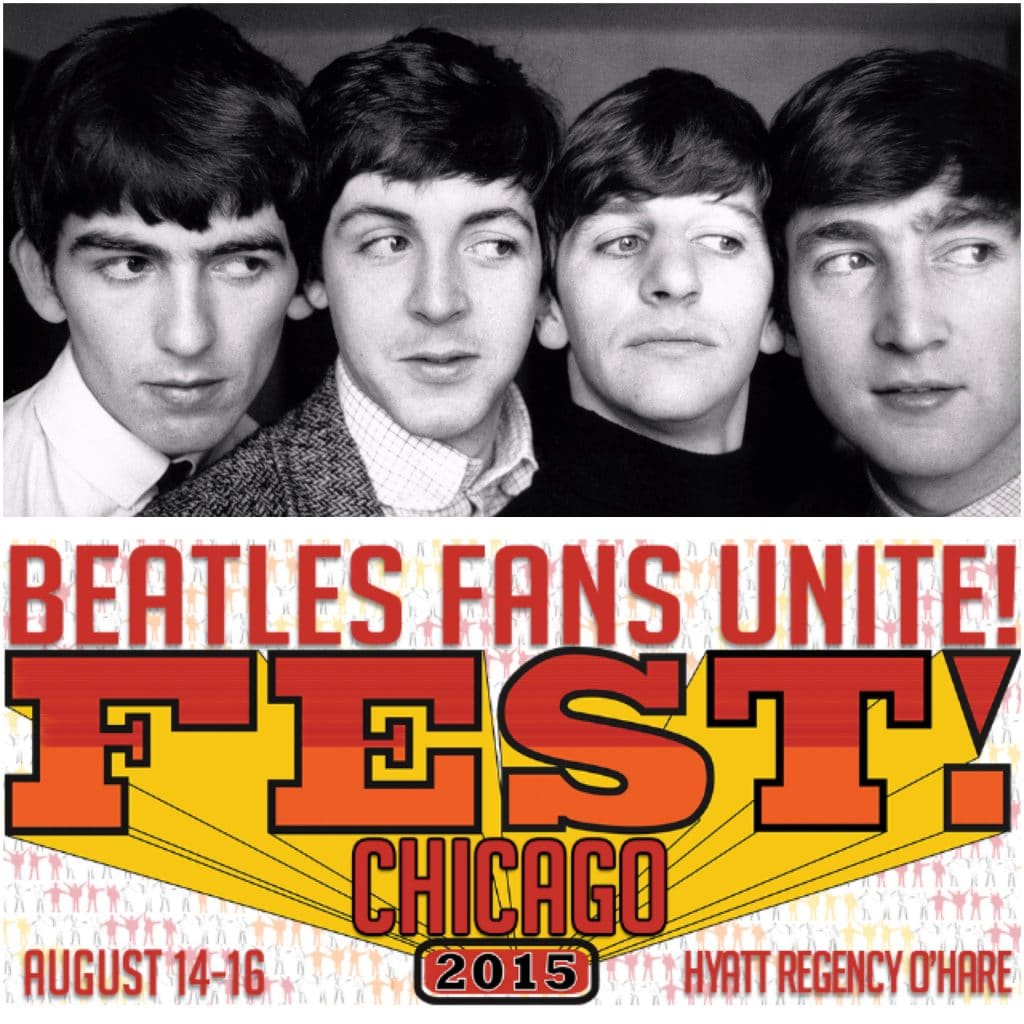 WOW CHICAGOLAND, how we love you! What a Fest weekend that was!

John, Paul, George, and Ringo did it again…they brought us back together loving them to pieces and recognizing everything they’ve done for our lives! Celebrating 39 years in Chicago, chilling with our Fest Besties, learning new stuff, jamming all the while…we have all of you to thank for it.

At #ChiFest15, thousands of Beatlemaniacs from 32 states, Canada, Mexico, Italy, England, and Australia came together at the Hyatt Regency O’Hare in Rosemont, Illinois to celebrate all things Beatles, including the 50th Anniversary of the Beatles’ earth-shattering concert at Shea Stadium and the 50th Anniversary of Help! This is our collective recap…

If you get to the bottom of this email and these pics aren’t enough for your vicarious re-living of the Chicago Fest, check out the Fest’s Danny Abriano’s Facebook album HERE head, see Carol Lapidos of the Fest’s album HERE, and head HERE to scope out our fans album, and Michelle Your Belle just uploaded 600 pics from from her iPhone.

Also be sure to head to and subscribe to our YouTube page, where more than a dozen videos from the Chicago Fest have already gone up and many more are on the way!

The hotel started to fill with fans as early as Monday, and excitement built up as we set up the hotel. Lobby jams started, the Hyatt staff put on their own HELP! shirts, and fans explored the bustling and festive Hyatt Regency O’Hare, preparing for the fab three days that were to come.

The FEST officially kicked off at 5 PM on Friday, August 14 as fans came in from the heat and brought their Beatley swagger with them to more than a dozen ballrooms throughout the hotel. Along with our band, Liverpool, perfectly recreating Beatles tracks note for note, our guests included Terry Sylvester, Bob Eubanks (who hosted the first ever Beatleywed Game!), Billy Kinsley, Jack Oliver, Louise Harrison, Mark Rivera, Dick Biondi (below with emcee Terri Hemmert), and Mark Hudson.

Friday night continued on with the 60s Dress Up contest and Dance Party –- where Liverpool treated Festers to three rocking sets of Beatles tunes. Head HERE for a video of Liverpool performing “Please Please Me” and head HERE to see them perform “Old Brown Shoe.”

To go along with our incredible musical guests, the weekend also featured some amazing Sound Alike and Battle of the Beatles Bands competitors. Eric Howell blew the crowd away while winning the Sound Alike contest singing ‘Something,’ and BEATLEJUICE (below) snagged the Battle of the Bands crown after performing an amazing version of ‘While My Guitar Gently Weeps’ that included a string quartet. Head HERE to watch their winning performance.

Our tradition of the ‘Beatles Gratitude Wall’ continued, and was where fans wrote and hung signs showing their gratitude to the Beatles…

The We All Shine On wall was new this year, to remember the people we love who we’ve lost. WOW, look at that diamond sky we created!

The FABoratory, our newest addition, where fans had the chance to turn into Beatles Magicians, Mad Fab Scientists, and teachers, was such a blast. Thank you to all the FAB fans who created truly exciting new elements of the Fest with your out-of-the-box ideas! ‘I Met A Beatle For Real’ was the real life version of Sara Schmidt’s blog, and boy were there some juicy stories of Beatle-meeting. Willa and Libby brought an awesome hand-painted face-hole exhibit called ‘I Saw The Photograph,’ and Lanea Stagg made the most delicious truffles in the world for us with her ‘Savoy Truffle’ culinary experience! We did an improv reenactment of The Beatles meeting Elvis with Ivor Davis, sideburns and all. Beatles bubbles were blown with Jeanie McNicol, and ‘Beatles Beat The Clock’ with Bob Abdou got super whipped-creamy, pie-in-the-face style at the end.

Photo below is on Her Majesty’s Throni, c/o of @paypay_beela12 on Instagram.

School of Rock Chicago took to the stage on Saturday afternoon (head HERE to see them perform ‘Dig A Pony’), and Girls Next Door A Cappella from the University of Illinois performed on Saturday night –- singing ‘Happy Birthday’ to a surprised and delighted Louise Harrison and performing a chills-inducing version of ‘Because.’

Later on Saturday night, Ron Aprea, who played sax on John Lennon’s Walls and Bridges LP, joined Liverpool as they tore through a sizzling version of ‘Whatever Gets You thru the Night.’ See the video HERE.

On Sunday, The Weeklings played a rollicking set that featured songs the Beatles wrote but never officially released, their Beatles-inspired originals, and other Beatles cuts.

The Apple Jam Stage made its Chicago Fest debut, where an amazing assortment of solo artists, bands, and DJs rocked all weekend long!

After Michelle My Pelle and DJ Sun Queen & DJ Madonna got the party started on Friday night, Scott Erickson performed deep cuts on both Saturday and Sunday, GiGi Wong-Monaco hosted a ukulele strum, Nick Peay played Beatles tunes on acoustic on Saturday and uke on Sunday, and Phil Angotti & Friends brought the house down with their McCartney-centric show on Saturday and their Lennon-centric show on Sunday. Also delighting fans on the Apple Jam Stage were School of Rock (after their main stage appearance), Sgt. Sauerkraut’s Polka Band, and the Yellow Submorons.

On both Saturday and Sunday, after the scheduled performances had concluded, the Apple Jam Stage opened up for the fans, who jammed into the wee hours of the morning.

Meanwhile, jams were going strong all throughout the hotel all weekend long — sunrise to sundown and beyond…

As always, the Beatles art contest was a place where fans were treated to some truly great art by professionals, amateurs, and kids, all who took home prizes. Of the many entries in the professional division, Sandra Ragan took home the top prize for her broken glass and ink Abbey Road art. The giant crocheted Beatles flag by Jessica DeJardin took top honors in the amateur division, and Cameron Hicks’ mixed media with melted crayons piece won the top prize for the kids division. We thank Deco for continuing to do such a great job with the Art Museum.

The Chicago Fest was home to two Beatles marketplaces, the weekend home of 20 of the best Beatles authors in the world, and Terri Hemmert of WXRT, our amazing emcee.

When Festers weren’t busy dancing, jamming in every nook of the hotel, and parading (at our fourth annual Beatles Animal Parade which included the new Martha puppet), they took in one of Bob Abdou’s highly entertaining Beatles puppet shows, got memorabilia signed, watched a movie in the Beatles video room, sang Beatles karaoke, toured the photo, Beatles art, and memorabilia rooms (Rob Shanahan, Neal Glaser, Jeff Augsburger), and more.

Many also took refuge in our Beatles Ashram, which featured yoga classes for adults and kids, intro sessions to Cosmic Consciousness with the teachers of Transcendental Meditation, Beatles Zumba with GiGi, Deco’s Poetry Jam, and the Ashram’s highlight of the weekend… a talk with Louise Harrison about spirituality — from George’s perspective and her own. “Whatever you do, do it with purity of purpose” Louise told us was one of George’s foundational beliefs and teachings.

Other highlights from the weekend were We Can Write It Out with Mark Hudson, Live Beatles Trivia hosted by Wally Podrazik and Joan Moran, Name That Tune hosted by Al Sussman and Tom Frangione, Lorie Nolte winning a trip to Las Vegas to see The Beatles LOVE Cirque du Soleil, nightly Fest recap songs with Danny Donuts (this time with a little HELP! from the FABoratory), a reenactment of Help!, and the always spectacular Pig Light Show that accompanied the concerts on Saturday and Sunday.

As always, the Musicians’ Forum on Sunday was a treat, as was that night’s concert that saw Liverpool play all of the Beatles songs from the Help! film and other Beatles cuts before the stage opened to sax men Mark Rivera and Ron Aprea, Terry Sylvester, Billy Kinsley, and the incomparable Mark Hudson.

Drew, John, Glen, and Chris of Liverpool were fantastic all weekend, kicking things off with the Dance Party on Friday night, playing the entire 1965 Shea Stadium set (50 years to the day!) and more on Saturday, and finishing things up in thrilling fashion on Sunday night after performing all the songs from the ‘Help!’ film and more as Mark Lapidos thrilled everyone while taking to the stage to sing ‘Charlie Brown’ with Mark Rivera, Mark Hudson (The Three Markies) and Liverpool. It was a special moment. Then, everyone came on stage to join in the traditional finale of ‘Hey Jude.’

After the Chicago Fest officially came to a close, the jamming continued into the wee hours of Monday morning, with Festers playing outside in the front of the hotel until the sun came up and people started going about their Monday morning business. This is a new official tradition — join us next year!

The fans brought the energy all weekend, with the traditions of Fests gone by seamlessly intertwining with the new events and activities that spiced up the weekend.

We are still gathering all of the pictures and videos from The Fest to share, and we want to see all of yours, too! As we did over the weekend, use the hashtag #ChiFest15 to share pictures with us on Instagram and Twitter (@Beatles_Fest), and post pictures on our Facebook wall at Facebook.com/thefest.

In addition to the albums that are already up, lots more pictures of all the guests, events, activities, and fans will be shared in emails, on Facebook, Instagram, Twitter, YouTube, and via email (send them to danny@thefest.com) in the coming days and weeks!

We’d also like to thank the Hyatt Regency O’Hare, who did a terrific job hosting the Fest, especially Deb. Most of all, we want to offer another thank you to all the guests and fans who came to celebrate all things Beatles for our 39th summer in Chicago.

We are already gearing up for the New York Metro Fest, taking place April 15 to 17 at the Hilton Westchester in Rye Brook, New York. Details will be released at TheFest.com in late-October, so keep an eye out! Hotel rooms are now available, so be sure to call (914) 939-6300 to book yours!

One thought on “2015 Chicago Fest Recap”