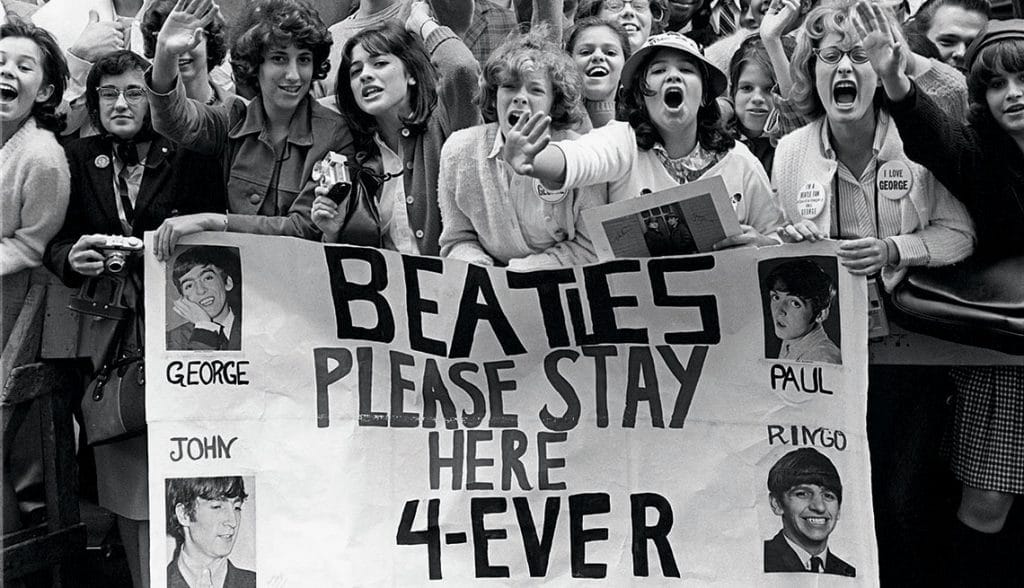 What are your earliest memories of The Beatles? How did your journey with the Fab Four begin? Jude Kessler, author of The John Lennon Series, shares her sentimental journey and encourages you to share yours! Our panel of judges will award 3 prizes for the best very brief stories in our Comments section below. The winners will get to expand their stories and be highlighted as our Featured Fest Bloggers in June!

“These are The Beatles!” she exhaled, her eyes dancing nervously. “Everyone’s in love with them!!! You’ve gotta pick one to fall in love with…by recess!” That was the beginning of it all, really — the sojourn into the frenetic and frantic land of Beatlemania.

All the rest of my memories that year center on The Beatles. I can’t recall anything else “in my life.”

My father, Dr. Tom Paul Southerland, the Rapides Parish Assistant Superintendent of Schools, was not impressed. Each month, he’d call me into his office and sit me down to begin the standard lecture: “You’re in love with that John Lennon, and it has to stop! He’s a hoodlum, I tell you. A hoodlum!” But the more my dad divulged that “fact,” the more I was attracted to the almond-eyed guitar player with his razored wit and deep, gritty voice…the more “The Leader Beatle” invoked devotion.

Despite my father’s despair over Lennon-mania, though, he saw sense. When “A Hard Day’s Night” came to Alexandria’s Don Theater, late that summer, he offered to take me to the film. He even did some research on it and commented on the cautious drive downtown, “I hear these Beatles are a lot like the Marx Brothers. Some people say they’re the Marx Brothers and the Keystone Cops, all rolled into one. In fact, down at the office, they tell me this movie really shows that side of their comedy.”

I don’t remember my response; I’m sure it was polite and agreeable. But in that fat, baby-blue-and-white, four-door Buick, I do remember thinking that I’d seen “You Bet Your Life” on TV and that John Lennon was nothing whatsoever like gruff, bespectacled, OLD Groucho Marx. I saw no correlation between Marx and Lennon, and frankly, I couldn’t imagine anyone who could! I bit my lip and sighed and thought my father and I, worlds apart.

At the end of film that afternoon, as the credits rolled across the screen (names I would come to know intimately in my adult life…some, like Victor Spinetti, whom I would meet and interview at our own Fest for Beatles Fans), I sat in the darkness and wept. I cried because I’d loved every minute of John’s film. (As Susan Ryan said to me years later, “What??! The other Beatles were in that movie????”) I sobbed because it had ended all too quickly. And I wept because there was no one there to understand my heart.

“Would you like to stay and see it again?” my father leaned over, asking me quietly. I was floored. Stunned! The man who had railed against The Beatles for months got it!!!! Somehow, he understood. And he was offering to devote two more hours of his life to a film he really didn’t want to see. It was a moment…one of the best of my childhood. My father had unwittingly conspired with The Beatles to create a forever memory.

Today, I live about two hours from Alexandria — or “Beatle Town,” as I call it. Every time I have an occasion to drive through the city or visit friends there, I fly back to 1964. I remember it all. I remember asking for my first Beatles album on my November birthday and getting, instead, a black-and-white LP by The Liverpool Beats singing, “I Want to Hold Your Hand” and “I Saw Her Standing There,” right alongside “Joshua” and “Maybe I Will.” I vividly recall fighting back hot tears over the sound of “Happy birthday to you, happy birthday to you…” and trying to act thrilled over the errant record looming next to my chocolate cake. I also remember climbing into bed that night and writing a very early letter Santa, who surely, in just a few short weeks, would right the wrong and deliver the treasure I so craved.

On a very chilly and early 25 December 1964, as I tore into the thick, crimson foil encasing Capitol’s “Meet the Beatles,” my introduction to “the lads” was finally complete. In twelve short months I had found my passion for a lifetime and stepped into my future career. I had selected not only “a Beatle to love,” but had chosen the direction for my college course of study and the path of my professional life. From that day on, it would be all John Lennon, all the time.

And yes Virginia, it still is.

Now…it’s your turn. Share your first and earliest Beatles’ story with us in the Comments below…let the memories Shine On.

2 thoughts on “In My Life — What are your earliest memories of The Beatles?”