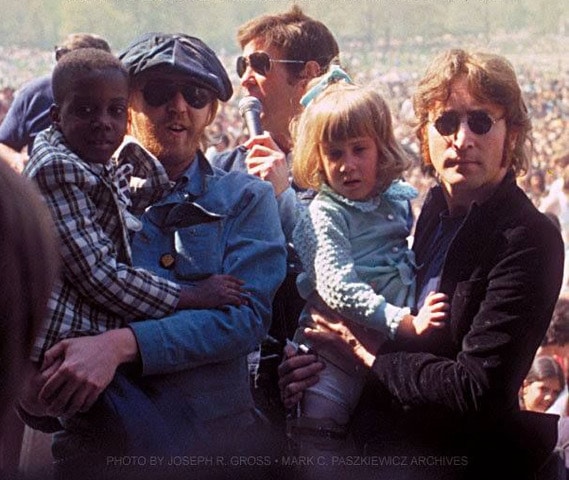 This is my story (short version)
Little did I know on Friday morning, April 26, 1974 that I would hear an announcement that would forever alter my life’s direction. It started out pretty ordinary. I took the bus from NJ to NYC and headed over to Sam Goody, the flagship store of the biggest record chain in the area. By total coincidence, we were having a special on all Beatles albums that week, and I had all my staff wearing special 10th Anniversary Beatles shirts provided only to my store by Capitol Records.

It was when I returned home that evening when I turned on the radio to WABC and heard THAT announcement: John Lennon and Harry Nilsson would be appearing with Cousin Bruce in Central Park on Sunday (4/28/74) to support the 1st ever March of Dimes event. That is when I realized I was going to meet John to tell him my idea of a 10th Anniversary celebration of The Beatles Arrival in America! I had already thought of the idea at the end of November, 1973 and booked the Commodore Hotel for the weekend of September 7-8, 1974. The only thing missing was getting permission to honor The Beatles (I was an idealistic 26 year old). Of course, everybody thought I was nuts, but, apparently, that didn’t stop me!

I won’t go into the details here of how I found out (I have told this story before), but I did find out where John and Harry were staying. After their 15-20 minute talk with Cousin Brucie in Central Park in front of 100,000 people, I went to their hotel and knocked on the door. Harry graciously let me in, I told John about my idea. He said, “I’m all for it. I’m a Beatles Fan, too!”

So, within about 40 hours of hearing that announcement — 45 years ago today — I was sitting with John in his suite actually telling him all about my convention idea in detail! After that weekend, I was taken a lot more seriously and just over four months later, it happened. All of The Beatles donated musical instruments for our Charity Raffle, but John wanted to personally come down on the Sunday evening to pick the winner of his signed guitar. Yes, folks, it really did almost happen! Alas, he changed his mind and went up to his farm for the rest of the weekend. To this day, it was the biggest secret I EVER had to keep!

Have a great weekend!!