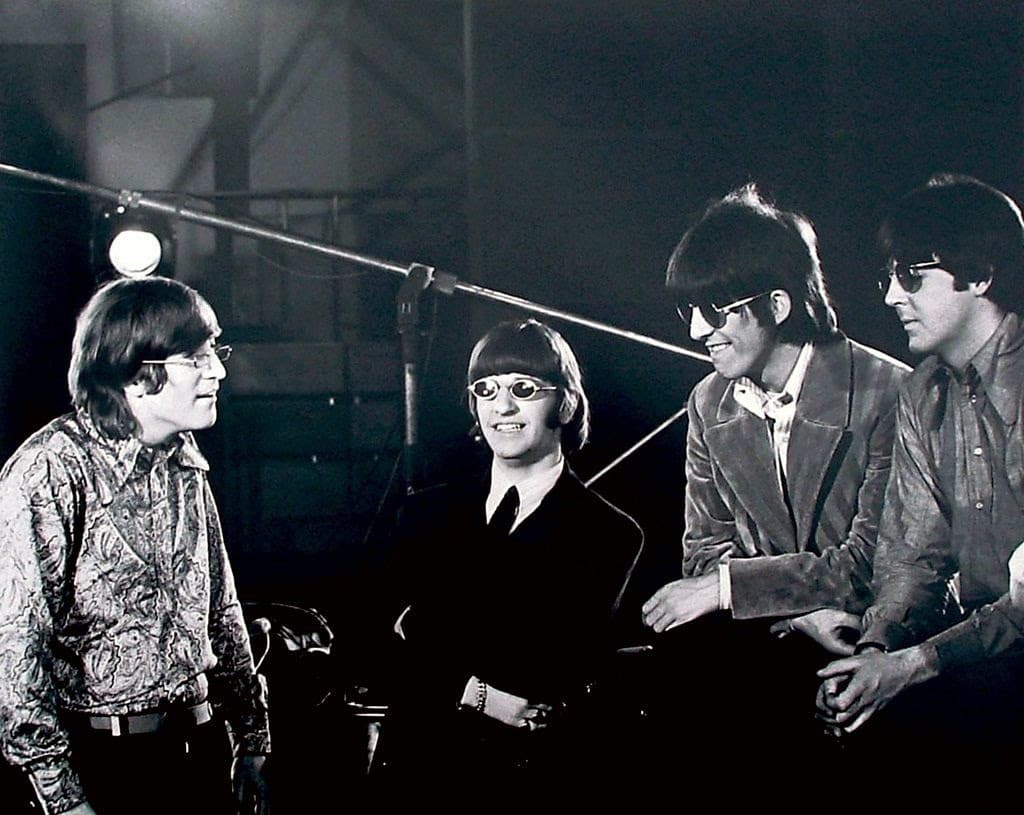 It was the blistering and bewildering summer of ’66. The Westinghouse air conditioner humming in my bedroom window provided more noise than relief as Emily Moss, Emily Wofford, and Patty Dalme waited impatiently as I carefully removed Revolver from its strange black and white cardboard sleeve.

I placed it on the turntable. Moss ate sliced lemons, dipped liberally into a saucer of fine sugar -– a dentist’s daydream of potential cavities. Patty and Emily smacked their Double Bubble and lazily thumbed through the latest Datebook. And, gauging my audience, I adjusted the volume on my new Magnavox record player as the count-in to “Taxman” began. That was the blistering part.

The half-hour or so that followed was the bewildering part…as if the summer of 1966 weren’t upsetting enough to four conservative girls from North Louisiana: boys in paisley shirts! Moms in vinyl raincoats and Mary Quant caps! The endless Vietnam War protests…the violent race riots! Our idyllic, happy days, we thought, were all but gone. Life had become bizarre and complex.

As we listened to “For No One” and “She Said, She Said” and finally, “Tomorrow Never Knows,” Revolver seemed the strangest part of that odd, pogo stick summer. For a few uncomfortable moments, as the needle found the scratchy play-out grooves, we were afraid to say anything. It took all the courage I could muster to even look at my friends.

“Well…” I had recently taken up swearing as an emblem of adult independence, “what the hell has happened to The Beatles?
“Yeah, what was that?” Emily Wofford shook herself the way a cat does when you’ve been holding it closely and set it free.
“That reeeeeeked!” Patty always knew her mind and spoke it.

Woffie and I nodded and shook our heads, agreeing but completely disgusted. But there was one in every crowd, or so they said.

“Ah, I don’t know,” Emily Moss sprawled out full-length on the bedspread, the way my Mother had told us never to do, “I thought it was pretty damn cool!” That was Moss. Her brother, Donald, was in a real band. He wore fringed, knee-length, moccasin boots, had long hair and colored beads that draped the doorway to his bedroom. If we had a “cutting edge” in our junior high foursome, Moss was definitely the one.

“Pffft! Define cool if that’s cool!” Woffie demanded.
“Yeah, well, I hated it,” I cut across the cool issue. “John didn’t even sound like John! And he was hardly on the record anyway! What’s the use of the record if John’s not there?” It was, after all, the Capitol version.

And so the discussion went in many bedrooms and family rooms and cars and soda shops and A&W Root Beer Stands and striped-awning Water Ice shops and narrow-laned hamburger joints across America. Was Revolver the most innovative, ground-breaking, breath of fresh air LP that The Beatles had ever created? Or was it junk? Was it art or was it a piece of “The Emperor’s New Clothes?” Was it brilliance or pure nonsense?

Over the next few months, I hope you’ll join me as we discuss these things together and share insights into each song on the Revolver LP. Every two weeks, I’ll post established research about Revolver from Beatles music scholars such as Robert Rodriguez, Walter Everett, Bruce Spizer, Anthony Robustelli, Aaron Krerowicz, Tim Riley, and many others. I’ll also propose a few of my own new and original ideas about the tracks.

I hope you’ll join in and share your facts and opinions and help us create The Fest for Beatles Fans Blog Dialogue on Revolver. We need YOU (Yeah, you! You in the paisley shirt!) to supplement what I’ll be sharing with additional and interesting information in our Comments Section.

There are so many controversial theories about the meanings of these songs and about the ways in which they were created and performed. So at times, we may disagree. That’s wonderful as long as we all disagree politely. All respectful opinions will be posted for everyone to enjoy. We want you all to be a part of this collaborative project and to jump in with your thoughts and information. Let’s work together to examine Revolver 50 years later and to find out what we’ve learned since the Summer of 1966!

To kick it all off, tell us your story!!! Where were you when you heard Revolver for the first time? And what, pray tell, did you think about it?

Hey, wait a sec…let me grab a cold Fresca and unwrap my Moonpie. Okay, there we go! Now I’m ready. Do tell!

One thought on “The Fest for Beatles Fans Dialogue on Revolver, Part 1”