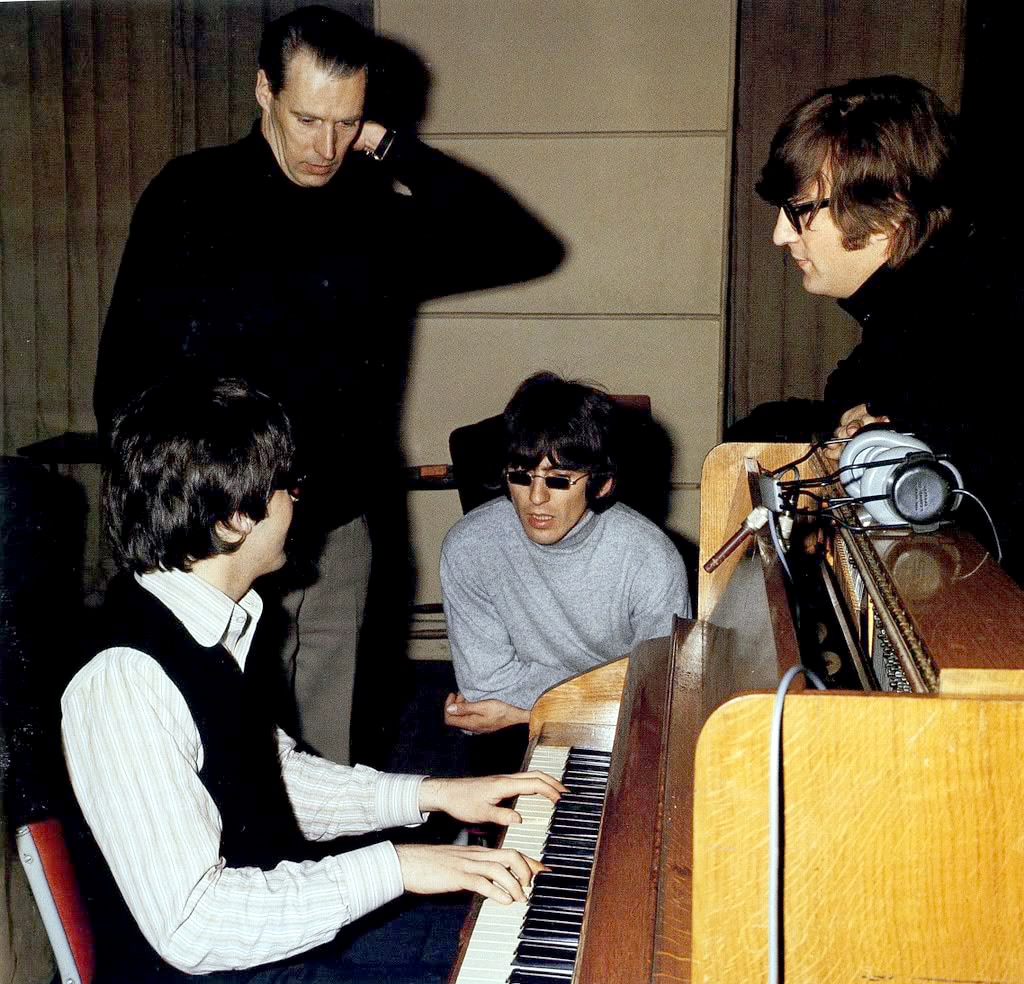 This is the first of 14 blogs discussing the songs on the Revolver LP. We invite you to add to this introductory information by posting your own facts about the song. We’d also love to hear from you concerning your opinions about the lyrics, music, and background of “Taxman.” Comment away!

1,2,3,4…and there it was: the familiar count-in. The comforting sound that had begun the Please Please Me LP. Except that it wasn’t…familiar, that is. Something was amiss.

This count-in was slightly disconnected, an appendage to the song, not an organic part of it. The timing was somewhat different; the transition, rough. And knowing that The Beatles did nothing unintentionally, (even when they sang lyrics erroneously, they often left the odd overlaps in the song on purpose, creating a human, “we’re infallible, too” atmosphere), we knew immediately that this disjointed intro held significance. It housed meaning.

The old, accustomed “count in” to the jangling rock’n’roll songs that had set “the teacups to rattling” (1) was gone. This count-in device heralded something new, something technically different, something seemingly same but dramatically innovative. All the customary pieces were there, but they’d been stitched together differently. Rearranged. And from the initial count-in, we knew that.

And that voice! It was…George! George who had always been permitted one (or lavishly, two) songs per LP. George, who had never opened a Beatles album before. George, and not Leader John, whose gravelly (and gorgeous) rock voice had welcomed us to With The Beatles, Beatles for Sale, and A Hard Day’s Night. And if not John, then it had always been Paul ushering in the 14 elegant servings laid upon the table by The Fab Four. Never, ever, ever had an LP been kicked off by George. Even Harrison’s most devoted fans were puzzled.

Nothing about “Taxman” was business as usual. Even the subject matter.

We were to discover, over the course of the next hour, that Revolver was revolutionary, a serious LP about serious topics: loneliness, loss, death, tragedy, and yes, even taxes. No silly love songs, these. Revolver sprang from the fertile landscape of upheaval: John’s failing marriage and the backlash of his “Jesus” comments, Paul’s ongoing struggles with Jane Asher, George’s religious awakening, the lads’ disenchantment with fame, and the life-altering inclusion of drugs into their experience. Oh, the times they were a-changin,’ and no album revealed those vast changes more graphically than Revolver. Indeed, the records’ first seven words swept the listener into the grim, beleaguered world of The Beatles.

“Let me tell you how it will be…” This was the phrase that John, Paul, George, and Ringo had grown accustomed to hearing…from Brian Epstein, Brian Sommerville, George Martin, Walter Shenson, Dick Lester, Dick James, and at times, even their own Neil Aspinall. John had heard the acrimonious phrase when he’d married Cynthia and was ordered to keep her cloistered and quiet. George heard it when he’d refused to go on the 1964 World Tour without Ringo. And lately, they’d all heard it as they’d vehemently protested the need to go out “on the road” while Brian had just as adamantly demanded they go right on touring. They were told “how it would be.” And, no one –- it seemed –- listened to The Beatles, most especially Britain’s tax man, who greedily gobbled up 95 percent of their hard-won earnings.

As strongly as George protested the unfair loss of his back-breakingly accrued income in the bitter lyrics of “Taxman,” on a grander scale, he was also protesting the group’s loss of autonomy. The Beatles felt that they had no voice, no say in anything. And though “Taxman” is, without a doubt, a strong Harrison offering, all of The Beatles played a part in making this song work. They all firmly believed in the sentiment this song was expressing. Thus “Taxman” became a rare collaboration, a one-for-all and all-for-one group effort.

John assisted George with the lyrics, suggesting that the background chorus sing, “Ahhhh, Mr. Wilson! Ahhh, Mr. Heath!” instead of the original words: “Anybody got a bit of money?” (2) Twanging that chorus to the “Batman” theme sound (3), John and George drove their meaning straight home: “We’ve been reduced to cartoon characters, y’know!” or more poetically, “We all live in a dark comedy.” “Taxman”’s simple words held myriad double entendres.

McCartney, Robert Rodriguez points out in his remarkable book, Revolver: How The Beatles Re-Imagined Rock’n’Roll, supported George as well, offering to pick up his Rickenbacker (not his Hofner) and expertly perform the song’s lead break…even adding a bit of Indian flair, as a cutting edge homage to his friend. And Ringo manned the drums and cowbell with a vehemence this topic engendered in them all. The Beatles were sick to death of being taken advantage of by anyone and everyone. They were taxed, man.

At the LP’s very outset -– in “Taxman” –- The Beatles were boldly calling out their offenders: The Labour Party and its leaders, the Conservative Party and its top brass, the press and film makers, their booking agents and publishing company, their merchandisers and record label, their producer and engineers, their wives and girlfriends, their manager, their roadies and publicity agents…even us, their fans. The boys were sick to death of “one for [them] and nineteen for [everyone else].” Day in and day out, they gave 95 percent as they wrote, sang, performed, acted, overdubbed, answered, bowed, mimed, clowned, smiled on cue, apologized, backtracked, packed up and moved on again, set up and tore down, hurried up and waited…they did everything they were told to do by arrogant others who only did a meager five percent. And they were tired of it.

“Taxman” set the tone for the rest of the LP. It said, “We’ve had enough. More than enough. We are no longer your performing fleas. This time we have something to say. And it’s not just ‘yeah, yeah, yeah.’ Sit up and take notice! You have been served.”

1. This is Johnathan Gould’s description of “She Loves You” in his book, Can’t Buy Me Love.
2. Robert Rodriguez, Revolver: How The Beatles Re-Imagined Rock’n’Roll, 127.
3. Read Robert Rodriguez’s discussion of “Taxman” to find out why this “unmistakable evocation of television’s then-current Batman series” might be impossible! Very interesting!

2 thoughts on “‘Cause They Were Taxed, Man…”