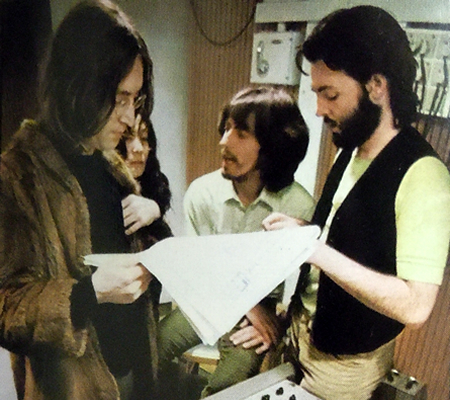 On January 29, 1969, the day before their rooftop concert, Paul McCartney and John Lennon had an at times intense conversation during the ‘Get Back’ sessions.

Over on the amoralto tumblr page, they did a great job breaking down the conversation.

The conversation – mostly dominated by Paul – revolved partially around the idea that the Beatles could do something instead of the rooftop concert.

Paul suggested playing in front of audiences again, entering a ‘visual’ studio, or doing some other not-yet-hashed-out thing instead of and/or in addition to the rooftop concert.

In the excerpt below, Paul makes his case:

PAUL: Yeah, but so… Hmm. But I’m just talking about this thing, like this thing we’ve entered upon now, we still haven’t got any aim for it, except another album, again. Our only aim, ever, is an album. Which is like a very non-visual thing, it’s very sort of… But it’s great, isn’t it, and we do albums, then. But—

JOHN: But albums is what we’re doing, at the moment.

JOHN: I mean, that’s what we [inaudible] talk about.

PAUL: —like I was saying the other day, is that you – is that you – you— [hesitating] We’re into albums as the four of us, but I really think we could be into other things. But every time I talk about it, I really sound like I’m the showbiz correspondent, trying to hustle us to do a Judy Garland comeback, you know. But really, all I mean is – well, look, let’s get – let’s change, or let’s go into a studio, like a vision studio, after we’ve learnt all of these, that’s just as good as this for sound, that’s got the same sort of thinking…

Later on in the discussion, Paul intimates that George would be in favor of a show in the mold of the ones Bob Dylan and Elvis Presley were having around that time, and John wouldn’t rule it out:

PAUL: There’s no other way. We can’t think ourselves out of it. And we can’t sort of say, well, it will be alright. See, and then the only other alternative to that is to say, well, we don’t – we will never do it to an audience again. But if we intend to – to keep any sort of contact on that scene… [pause] Yeah. I do understand George’s just saying, “There’s no point,” you know, because it is like we’re Stravinsky, and it’s in the music. And he doesn’t sort of get up and play his ‘Joanna’ for them anymore. He just writes it, and just sort of maybe occasionally conducts it.

JOHN: But as long as there’s a good reason – like George wants to do a heavy show, like Dylan and Presley, all that.

PAUL: That’s us again, you know.

All Beatles fans know what happened next.

The group went on to the Apple rooftop the next day for their final public performance.

A few weeks later, the group began work on ‘Abbey Road,’ the final album they would record.

What would have happened if Paul had convinced John and George to tour again…or if he had just convinced them to do one ‘audience show.’

Chances are that with George being held back musically, John wanting to branch off, and Paul’s at times overbearing personality, the group still would’ve disbanded.

However, it certainly would’ve been interesting to see what the dynamic would’ve been if the band had toured or played even one legitimate concert instead of the rooftop gig.