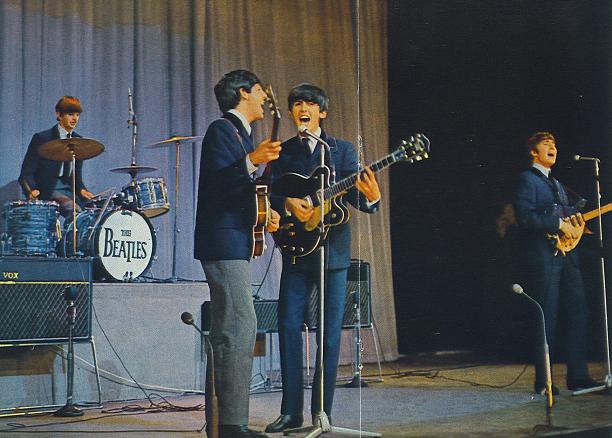 Jude is the author of The John Lennon Series: https://www.johnlennonseries.com

Certain seasons consistently inspire us, sweep us off our feet, or bless us immeasurably. The patterns of our lives are etched as we return, time and again, to that happy collection of weeks or months in which we feel that we’re at our very best. Some people blossom in autumn’s slanting light, chilly afternoons, and radiant foliage. Others shine in summer’s sand and sun. Some find peace in spring’s gentle, sea-green rebirth. But for The Beatles, it was November — winter’s brisk onset — that always spiraled them to new heights! Let’s take a look:

Accompanied by his assistant, Alistair Taylor, dapper 27-year-old North End Music Store manager, Brian Epstein, arrived at Mathew Street’s raucous, underground Cavern Club for the lunchtime session. Feeling nervous and out of place, Epstein pushed jitters aside, to see the much-discussed band, The Beatles. For months, he’d seen John Lennon’s “Beatcomber” column in Mersey Beat, right next to his own “Record Releases” column, and the boys’ offbeat wit had intrigued him. Brian had even visited Editor, Bill Harry, at the Mersey Beat office on Renshaw Street, Liverpool, to discuss Lennon and his group. But when a young NEMS customer named Raymond Jones (and later that afternoon, two teenage girls) had requested the new record, “My Bonnie,” by The Beatles,* Brian had decided to see the group for himself. The Cavern excursion was not in vain. Planning to stay only for the first set of the afternoon, Epstein became intrigued with the charismatic, lively, and talented lads who not only sang incomparably but also gave their all to mach shau. During a break, Brian approached George Harrison about getting a copy of “My Bonnie,” and speaking to the group as a whole, Epstein proposed a meeting in the days ahead, with an eye to management of the band. As we all know, the rest is history! What a landmark November day it was! And as John would later wryly point out — of course, it occurred on the NINTH!

*Actually, the record was by Tony Sheridan and The Beat Brothers

4 November 1963 – The Beatles at the Royal Command Performance

In October 1963, The Beatles had taken the boards for Sunday Night at the Palladium, and they’d thought it was the greatest honor they could achieve! Now, however, they’d been included in the roster for The Royal Command Performance (a.k.a. The Royal Variety Show)! John, was a bit reticent about performing for “suits,” the “very sort I’ve always sought to avoid.” But the other three Beatles were elated. Appearing as the 7th act on a 19-act bill, the boys were to perform four songs: “From Me to You,” “She Loves You,” “Till There Was You,” and “Twist and Shout.” John — taking the mickey out of the nervous-as-a-cat Brian Epstein — had threatened to announce the final song with this irreverent introduction: “For our last number, I’d like to ask your help. The people in the cheaper seats, clap your hands. And the rest of you, if you’d just rattle your f******* jewelry!” But after watching Brian dissolve into tears over the brazen suggestion, John modified the intro a bit, with (as they say) the offending “expletive deleted.” Even so, Lennon’s cheeky comment made a statement. John had taken the stage with his brothers for camaraderie’s sake, but he’d still found a way to announce his independence from conformity. The show itself was Beatle-brilliant, and the lads were invited back every single year that they were together. But each year, partially in deference to John, The Beatles very politely declined. That November 1963 night, however, with Princess Margaret and the Queen Mother looking on, four lads from “the uncultured North, Liverpool” shone as stars unequalled and made British entertainment history.

John Lennon had once admitted to his friend, journalist Maureen Cleave, that being in The Beatles wasn’t his “end all, be all.” He said, “You see, there’s something else I’m going to do, something I must do — only I don’t know what it is. That’s why I go around painting and taping and drawing and writing and that, because it may be one of them. All I know is, this isn’t it for me.” (“How Does a Beatle Live? London Evening Standard, 4 March 1966) John was forever searching for significance. But he seemed to find his heart’s home on 9 November 1966, when he attended the private, pre-show for “Unfinished Paintings and Objects,” the work of Japanese avant garde artist, Yoko Ono. Strolling through London’s Indica Art Gallery, John was bowled over by Ono’s “outside the box” style and humour — a style that very much reminded him of his quirky, clever mother, Julia Stanley Lennon. And when John talked with the petite, soft-spoken artist, he found Ono as interesting as her work. It was the beginning of a romance that would transform John’s life. Over the next few years, his ideas would drastically alter. John would become different altogether (now) thanks to this one remarkable November night.  (And it was also on the ninth!)

John Lennon fans, please note:  In the ancient world, November was the ninth month of the calendar of Romulus, c. 750 BC. When January and February were added to the Roman calendar, November retained its name (from the Latin novem, meaning “nine”). No wonder this month was so life-changing for The Beatles!

We often scurry through November to get to the glittering joys that December holds, but the eleventh month – as The Beatles teach us here – holds remarkable enchantment of its own. Take time to enjoy bonfires, changing leaves, Thanksgiving, walks in the chill, roasted marshmallows and chestnuts – the vivid sights and sounds that accompany first frost. Be aware. Be open to possibility. November undoubtedly “loomed large in The Beatles’ legend.” Perhaps November has a bit of magic to share with you as well!