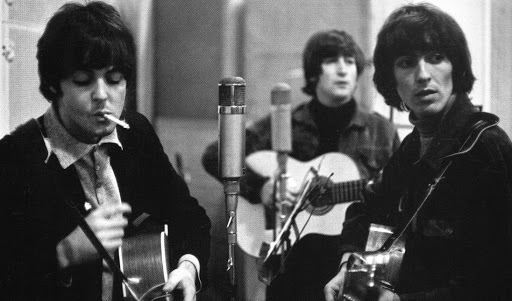 Side One, Track Three

The Fest for Beatles Fans’ deep dive into the innovative tracks on Rubber Soul continues with Jude Southerland Kessler, author of The John Lennon Series, and Tom Frangione, host of the “Way Beyond Compare” program on Sirius XM’s Beatles Channel, Channel 18. For years, Tom has been an integral part of the Fest. He has also served as the popular co-host of The Beatles Channel’s “Fab Fourum.” Recently, Tom launched a third show called “Apple Jam,” with co-host David Fricke. Together, they explore The Beatles’ groundbreaking record label.

Here are Jude and Tom with a fresh, new look at this McCartney classic.

Second Engineers: Ken Scott (and according to Margotin and Guesdon, Richard Lush)

Stats: Recorded in 2 takes on 11 November, with superimpositions added later.

Inspiration: The melodic bass work of Detroit bass man, James Jamerson as well as the chord progression in “The Same Old Song” by the Four Tops.

Rarely is the instrumentation list controversial. In this case, however, sources widely differ on “who played what.” Some authorities list Paul’s bass plus two additional guitars at work: one, George’s and one, John’s. Some experts say John only played tambourine. Others list Ringo as manning the tambourine. Some sources say that John played the piano; far more state that the piano was played by Paul. Here is a compilation of all possible scenarios.

John Lennon, sings backing vocal (In some sources, John is on the piano, and others have John also playing guitar.)

Ringo Starr plays drums…possibly, he plays tambourine, if John is not playing the tambourine.

By the time that Rubber Soul was in production, very little had changed in the famous long-distance relationship. And Paul was disturbed. In “You Won’t See Me,” his tone was much less conciliatory. He bluntly stated: “I have had enough, so act your age.” Without trying to sugar-coat his discontent, McCartney vowed that if nothing altered, he would certainly “lose his mind.” Indeed, the lovers’ problems were plainly enumerated in the bridge (cleverly housed in a minor key to convey melancholy): “Time after time, you refuse to even listen…I wouldn’t mind, if I knew what I was missing!” Paul’s endurance had all but expired.

One wonders if it was coincidence or brilliance that McCartney (as Ken Womack aptly points out in Long and Winding Roads: The Evolving Artistry of The Beatles) “borrowed the three-chord sequence that undergirds ‘You Won’t See Me’” from The Four Tops’ hit, ‘It’s the Same Old Song’.[2] Because singing “the same ole song” — albeit in creative, chart-topping iterations — is precisely what McCartney was lamenting in “You Won’t See Me.” Paul was weary of the same woeful complaints, song after song. He was tired of trying to get his girl to engage. He felt defeated that Jane and he had “lost the time that was so hard to find.” So, pounding out brusque piano bursts and short, clipped lyrics, he vented his long-standing frustration. By late 1965, Paul’s patience had waned.

First, look at the opening lines of the song. Paul sings, “When I call you up, your line’s engaged.” This phrase could mean, quite simply, that when he rings his love on the telephone, her phone line is “engaged” or as Americans say, the phone line is “busy.”

However, a secondary meaning hovers in the wings. “Your line” may also mean “your line of thinking.” (As in, “I’m not falling for your line!”) And the word “engaged” may also mean “put into action” or “put into play.” (As in, “He engaged his technical skills in the challenging task.”) If you insert those two secondary meanings into the song, then Paul is cleverly saying that when he tries to connect with his girlfriend to discuss their problems, her standard way of thinking (aka, “her line”) is already at work (or “engaged”). In other words, when he tries to reach out to her, she is immediately defensive and unreceptive to what he’s saying.

But then, the meaning shifts slightly. Instead of complaining that he is being merely physically and literally rejected, Paul’s use of “you won’t see me” alters a bit here:

We have lost the time
That was so hard to find,
And I will lose my mind
If you won’t see me.

Here the singer seems to be bemoaning the fact that his love won’t try to understand him. He’s not merely despondent because she won’t connect with him face-to-face; he’s disappointed that she won’t make an effort to “see” what he is trying to say. This iteration of the phrase is akin to the popular British idiom, “You won’t see sense!” which translates, “You won’t try to comprehend the facts or the truth in the matter.” Failure to “see him” and his side of the story is the singer’s underlying grievance.

But…there is yet another level of meaning to the simple phrase, “You Won’t See Me.” Look at it in this final context:

Here the singer is threatening that if his love continues to push him away and turn a deaf ear to his rationale, then he “won’t want to stay.” He vows that he will give up trying to explain and “won’t have much to say.” And ultimately, she won’t “see” him at all, because he will walk away. In other words, the lovers won’t be “seeing each other” anymore. Their story will end.

This adroit use of such an unpretentious phrase illustrates the growing maturity of McCartney as a lyricist in 1965. Even on a song that he was pressed to create (because The Beatles needed to complete Rubber Soul quickly), Paul produced a title phrase that functioned on three complex levels of meaning.

Finally, what is one to make of the “ooh-ooh la, la, la” backing chorus verbiage? Certainly, that is not a phrase that four former leather-wearing, swearing, drinking, carousing Liverpool boys would ever say…or sing! And yet, this whimsical patter is repeated over and over, as the response to Paul’s every grievance in the song.

Sung in the upper scale, the “Ooh-ooh la, la, las!” appears to be the feminine response to the male singer’s objections. Is Paul depicting his love’s answer to his complaints as “Whatever!” or “Blah, blah, blah!” or “I’m not listening! I’m not listening!”? Possibly. The “ooh-ooh la, la, la” tag at the end of each line does seem to serve as a brush-off to his arguments.

All in all, “You Won’t See Me” is a song teeming with lyrical surprises. It is rich in the “wink, wink, nudge, nudge” tradition that Scousers could master so well. This is the third song on the Rubber Soul LP that — once we examine the words— takes us by surprise.

Recently, I was thrilled to chat with my long-time friend from The Fest for Beatles Fans, Tom Frangione, who not only co-hosts two radio shows on Sirius XM’s Beatles Channel, but also hosts his own Beatles Channel program, “Way Beyond Compare.” We are so proud of our beloved Emcee for the Jersey and Chicago Fests, and we welcome Tom to the Fest Blog discussion of Rubber Soul.

Jude Southerland Kessler: Tom, Barry Miles in The Beatles’ Diary, Vol. 1, calls “You Won’t See Me” a “superb piece of commercial songwriting.” (p. 217) What makes this track so marketable? What is the unique appeal of this late 1965 McCartney offering?

Tom Frangione: Well, without over-generalizing, it has all the hallmarks of the “mature” period of the early Beatles pop. They’re writing material that’s rapidly outpacing the standard Top-40 fare of the day, bringing a bit more conflict into the lyrics, stacking the harmonies in the backing vocals – not just the “oohs and aahs,” — but also in the echoed cascading phrases of the choruses (“if I knew I wouldn’t, no I wouldn’t”). That gives the song a great deal of texture. And to borrow a phrase, it provides “an early clue to the new direction” for Ringo’s drumming. The fills are much busier, and Ringo would explore this at greater length in upcoming works, including his own favorite drum part in “Rain.” Furthermore, his hi-hat work is a precursor to what we would soon hear in songs like “Paperback Writer.”

Kessler: The first two songs on Side One of Rubber Soul have depicted relationships with strong, autonomous women. Is the invisible female protagonist in “You Won’t See Me” portrayed much in the same vein?

Frangione: That’s a very interesting point I’d never considered, but yes, women are clearly taking on a more dominant, less passive role in the first THREE songs on Rubber Soul. The mix of independence and taking the lead in “Drive My Car” and “Norwegian Wood” sees the ante raised here. This female is pretty much dictating the pace of this relationship. Gone is the “but I’ll do anything to win you” urgency from her male counterpart; however, in the end you can sense a scenario where there’s a risk of losing at all costs. This theme may be an early precursor to Jackson Browne’s line years later: “You win. I win. We lose.”

Kessler: What haven’t we discussed/discovered about “You Won’t See Me” that you would like to share with us, Tom?

Frangione: The song’s structure is quite deceiving. In 2016, Paul included “You Won’t See Me” in the acoustic set on one of his latter-day tours (2016, I think), showing the underlying foundation upon which the chords were built – a 2-string descending line.

Yet, when we “legend in our own room” guitar types play it, we see a chord progression that actually ascends from A to B to D and back to A for the choruses. That buried descending line provides the secret ingredient. Toss in a modulation from major key to minor in the 3rd line of each verse, and the dissonance of diminished chords in JUST the right spot in the chorus (it’s right on the word “refuse”, precisely where the entire conflict of the lyrics rest), and you’ve got a very sophisticated piece of songwriting.

“You Won’t See Me” is another one of those Beatles songs that, had it been a single, would have a been a MONSTER hit!

“Way Beyond Compare” – an informative look at Beatles Rarities, alternate takes, live performances, and versions of Beatles songs you’ve never heard before! This unique program debuts each week on Sunday…and “anytime at all” on the Sirius XM app as well.

“Apple Jam” – a close look at the history, artists (such as Mary Hopkin, Badfinger, Billy Preston, James Taylor, etc.), and records released on The Beatles’ own Apple Records label. Tom Frangione co-hosts the show with rock’n’roll journalist, David Fricke. Catch this one-hour program on the first Wednesday of each month…with repeats throughout the month and “anytime at all” on the Sirius XM app as well!

[1] Margotin, Jean-Michel and Phillipe Guesdon, “We Can Work It Out,” All The Songs: The Story Behind Every Beatles’ Release, 314. Margotin and Guesdon remind us that “We Can Work It Out” was written in 1964 at Rembrandt, the Liverpool house that Paul bought for his father. Chronologically, therefore, the song and the progression of the relationship portrayed by Paul in “We Can Work It Out” falls in between A Hard Day’s Night and Rubber Soul.

[2] Womack, Kenneth, Long and Winding Roads: The Evolving Artistry of The Beatles, 118.