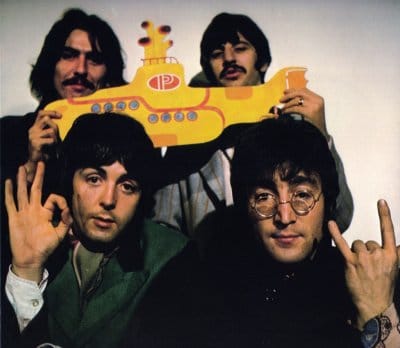 The Beatles were very lenient with the public’s interpretations of their songs.

In fact, only one or two times did the lads insist that the public’s comments about their lyrics was “dead wrong.” Toward the end of his life, John Lennon was adamant that “Lucy in the Sky with Diamonds” was not about LSD! (And Paul McCartney backed him up on this). Similarly, Paul once said, “Personally, I think you can put any interpretation you want on anything! But when someone suggests that “Can’t Buy Me Love” is about a prostitute, I draw the line! That’s going too far.” (1)  But other than these two exceptions, as a rule, The Beatles welcomed the public’s multi-colored explanations of Beatles lyrics. In fact, they came to expect it.

I can just imagine Paul “laying in bed in the Asher’s garret,” (2)  working on the lyrics for “Yellow Submarine.” I can almost see the glimmer in his eye as he imagines what the “average Jill or Joe,” the scholarly professor, and the protester are going to make of his “simple children’s song.” It must have amused him.

The thing is…every single Beatles LP included a song for Ringo. And this is Ringo’s Revolver song, written in his tight vocal range and fitted for his “down-to-earth,” genuine personality. Ringo possessed a gentleness that appealed to many people, including children. (Hence, his work as Mr. Conductor on Shining Time’s (Series One) Thomas the Tank Engine show and his I Wanna Be Santa Claus CD years later). Paul’s placing of Ringo in the classic role of storyteller for “Yellow Submarine” was ideal. It worked.

But almost as soon as the LP was released, critics began to offer up far-flung, complex explanations of the magical song’s “deep and hidden meanings.” Here are just a few:

In fact, Paul told author Barry Miles, “I was thinking of it as a song for Ringo, which it eventually turned out to be…I quite like children’s things; I like children’s minds and imagination. So it didn’t seem uncool to me to have a pretty surreal idea that was also a children’s idea. I thought also, with Ringo being so good with children—a knockabout-uncle type—it might not be a bad idea for him to have a children’s song, rather than a very serious song. He wasn’t that keen on singing.” (5)

In short, on Side One of Revolver – a highly complex, intense compendium of thought-provoking songs – Paul’s concept was to offer up a simple ditty with “short words…which would be picked up quickly and sung by children.” (6) It was to be a breath of fresh air, as it were.

Indeed, on the 2 May 2014  Howard Stern Show, Donovan stated: “It’s not really a submarine; it’s really about the life that [The Beatles] had been forced into living inside their own lives in the white tower called ‘Beatle fame’ and not really having any contact with reality out there anymore…you know, we are insulated from the outer world.” Donovan believed that “the friends aboard the submarine” were The Beatles’ entourage and close friends/associates, and that the sea was the protective bubble surrounding the group, encasing them while at the same time, cutting them off from life at large.

Naturally, there are other wild-eyed theories out there, some as far-fetched as the notion that the song proves John Lennon’s obsession with phallic-symbols (echoed by John’s submarine bath scene in A Hard Day’s Night). But since John had nothing to do with the writing of “Yellow Submarine,” this argument rather collapses under its own weight, doesn’t it?

So…what say you? Which theory do you believe? Paul proclaimed, “I knew ‘Yellow Submarine’ would get connotations, but it really was a children’s song.” (11) Or was it? Send us your thoughts, opinions, and ideas, and we’ll share them with one another. Furthermore, if you have a theory we haven’t discussed, send that along as well! We’d love to hear from you!

The measure of a great work of literature is that decades after its creation, the work’s depth of meaning is still being debated and discussed. Paul might have set out to create a unpretentious, light-hearted song, but for The Beatles, a masterpiece was always the final destination. And so it is here as well.