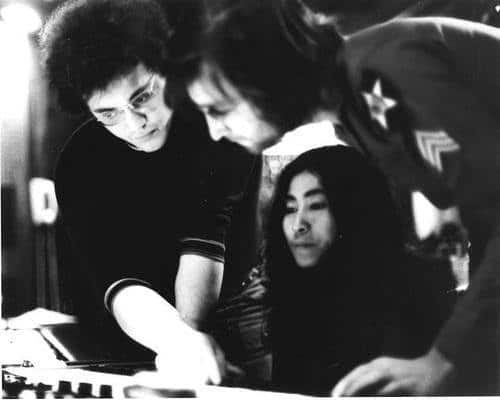 The job of a Sound Engineer, as I understand it, is to oversee the mix of volume levels, sound effects, and instrument inputs in the recording studio…to work magic so that the artist’s song is presented in its very best light. Sometimes this involves moving microphones, and shuffling amplifiers and drums around so that the sound reverberates in a more effective manner. Sometimes this involves ingenious solutions like sticking overcoats in the drums to muffle them. Whatever it takes, a sound engineer does it.

That is what Dennis Ferrante did for John Lennon and Yoko Ono at The Record Plant in New York City. And that, essentially, is what Dennis did with his life.

Dennis was given “the gift” of a bum heart. During his life he had numerous heart surgeries, and in his last years, he was living with the use of only twenty percent of his heart in functioning condition. But with that twenty percent, he loved more, laughed more, and celebrated more than anyone I know. Dennis Ferrante was exuberant.

I first met Dennis when he guested on my “John Lennon Hour” show on BeatlesARama Radio. I had prepared 12 questions to ask Dennis during our hour together. In 60 minutes, he answered three. Dennis had a way of telling a story (with all the trimmings!) that kept an audience captivated. He didn’t answer a question with terse facts or data. He answered by unveiling – bit by bit – his colorful, thrilling adventures. He answered by letting the listener into the electrifying world in which he lived. When Dennis told a story, you walked his walk. His answers were lengthy and fascinating and chock full of life. You sat enraptured by the things Dennis said.

And when Dennis talked, everyone laughed! He was witty, raucous, and bold. When I greeted Dennis on that first show that we did together, I said, “So glad to have you with us, Dennis!” And he fired back, boldly, in his New Jersey accent, “So glad to be had!” I cracked up.

Over the next three years, Dennis appeared on my radio show three times, and when I moved to BlogTalkRadio, Dennis moved with me. The week that Cynthia Lennon died (and my heart was broken), I phoned Dennis and asked him if he would be my guest – I needed someone special that week to lift my flagging spirits. He immediately agreed. And even in that gloomiest of weeks, he made me smile.

Dennis wouldn’t take “sad” for an answer. On any given day, even in the hospital I imagine, he was mischievous, hilarious, and badly-behaved.

Dennis had incredible stories about his years in the studio with Cher, John and Yoko, Harry Nilsson, Lou Reed, and so many others. His stories of restoring Duke Ellington’s music to its original vibrancy and life (a meticulous task that won him a Grammy) were riveting. But he never told those stories to “name drop” or boast. He told them because they were funny; he told them because they made people grin, ear to ear. He told them because hearing those stories made others happy. You couldn’t be in Dennis’s presence without laughing. He was THAT guy. He was the one you wished you could be.

Dennis wasn’t without his problems. He had flat-lined several times before he died. Quite frankly, he knew his time was limited.

I had already invited Dennis to be on my radio show for my birthday this coming November, and he’d responded, “I’ll be there, if I’m still here.” Dennis knew his heart was iffy at best. But that never dampened his mood. Like any good sound engineer, he mixed magic…but in the studio of his life. He equalized and blended his attitude so that the only sound we heard was joy.

We all face tragedies daily, large and small. But it’s our choice to let those roadblocks control us or to shuffle things around and adjust levels so that we control them. Dennis engineered the soundtrack of his life. It’s now a heavenly anthem. And the angels are smiling.

To hear Dennis’s last interview with Jude (and it’s a classic!) go to: