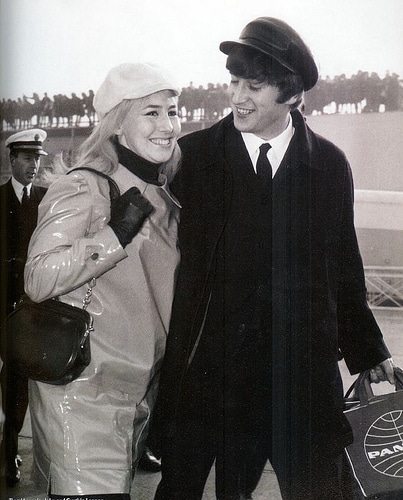 At the New York Metro Fest for Beatles Fans two weeks ago, I delivered a talk called  “Cynthia Lennon: the Real Fifth Beatle.” And with all my heart, I believe she was just that.

She was there in the basement of The Jacaranda, holding John’s microphone for him (well, a mic duct taped to a broom) in 1959…long before Stu or Brian or Pete or George Martin ever appeared on the scene. She lovingly told John that he was “too big for Liverpool” as she watched him rehearse with Paul and George in Room 21 at Liverpool College of Art during those lunchtime sessions of 1959 and 1960. And unswervingly, she believed in his destiny to achieve “the toppermost of the poppermost” long before the Beatlettes (or even the Wooden Tops) existed. Cynthia was the first to understand and cherish John’s dream.

When Cynthia found out the she was pregnant, John immediately (immediately!) offered to marry her. And had she pressed him to leave the band and become a “proper husband and father,” I believe he would have been just as dutiful in doing “the right thing.” But Cynthia never asked that of John.

Instead, Cyn spent her honeymoon night alone – moving in to Brian’s Falkner Street flat and making a home for John, even though he had offered to take her along with him that evening to his gig. Cynthia refused. She chose to remain in the background and to shun the limelight and to give John a home to which he could always come when he was tired, frustrated, and in need of love.

During the year (August 1962-August 1963) that Brian forbade her to appear with John in public, Cynthia acted accordingly and vanished from sight to help her husband’s career. She ran from reporters. She shielded her husband and her son. She pushed her needs aside and endured aching loneliness so that The Beatles could grow and emerge as the stars she knew they were to be.

When girlfriends joined the troupe of Beatles – as did Maureen Cox – Cynthia befriended them and made them feel welcome. She worked side-by-side with Freda Kelly to answer John’s fan mail, and she endured the torrent of fans in Emperor’s Gate for much longer than was humanly possible. Cynthia did whatever John needed her to do to help him achieve the life for which he longed.

In January of 1964, The Beatles were appearing for three weeks in Paris. During that time, they got one day (one day!) off. The other three Beatles spent that day sight-seeing and sleeping and having a grand ole time. John flew back to London for that 24 hours to spend the time with Cyn. It was worth it to him. She recharged him and inspired him and made him whole.

And on that one day in which they were together, John invited Cyn to come along with him on his first American visit in February of 1964, even though Brian had forbidden him to ask his wife along. John wanted Cynthia to share in the excitement and the joy of his success – a success that her devotion had made possible. And she accepted. At Ed Sullivan, Carnegie Hall, Miami, and Washington, D.C. Cynthia was there.

In America, reporters tried to get her to talk. She would not. She stayed in the shadows and let her husband take the bows. She made her life about John and about John’s son, her beloved Julian. And even when she wrote her first book, A Twist of Lennon, she minimized John’s faults and played up his strengths. She was his best friend.

In Lennon Revealed, Larry Kane writes, “The romance between Cynthia Powell and John Lennon, somewhat forgotten in the modern era of Lennon remembrances – and often ignored when it was in full bloom – is a significant one for the young artist. Although the marriage was prematurely instigated by the pregnancy that brought Julian to life, there is no question that Cynthia was John’s first real and intense romantic love and that her role in his early days of creativity with The Beatles cannot be discounted.”

And Tony Bramwell, Kane notes, adds, “Cynthia was beautiful, physically and on the inside. Although she knew he was apt to find love on the road, she was totally dedicated to his success, and I might add, influential. He was insecure and Cynthia was always there to pump him up, to buttress…his weak side. She was a wonderful mother who loved John deeply.”

John’s indiscretions were ignored by Cynthia. His anger was forgiven. His focus on his career rather than his marriage was never even considered a problem to his adoring wife. Cynthia wanted the best for John, always. And that kind of unconditional love sparked “When I Get Home,” and “Do You Want to Know a Secret” and “I Call Your Name” and “It Won’t Be Long” and so many more. Even when Beatlemania began to take its toll on their marriage, John penned the haunting “It’s Only Love” for his Cyn.

Today the world has lost the Fifth Beatle. But more importantly, it has lost a true lady who made “night time bright, very bright.” Cynthia Lennon will always shine on.

11 thoughts on “Cynthia Lennon: Shine On”