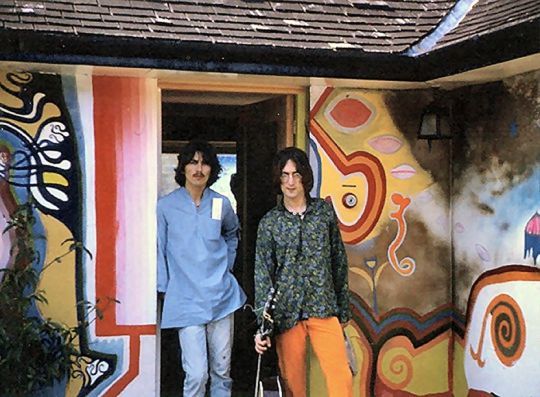 Prior to their 1968 summer and early autumn recording sessions at EMI, Paul McCartney stated that The Beatles’ original plan was to have several rehearsals prior to the recording of their new LP.[i] But “life,” as we all know, “is what happens while you’re making other plans.” [ii] And so, the boys got one day and one day only to present their ideas and concept songs for The Beatles LP to one another. But what a magical day it turned out to be…and what remarkable tracks have recently been revealed to us via the long-awaited mid-November 2018 release of the Esher Demos.

For McCartney fans, there are not as many diamonds to unearth on Esher as there are for Lennon or Harrison aficionados. In keeping with Paul’s lifelong belief that rock’n’roll should be well-manufactured rather than grown, extemporaneously organic, Paul came to George Harrison’s house at Kinfauns with his demo songs almost completely fleshed out. Prior to his arrival in Esher, Paul had performed and recorded the songs with full backing tracks. He’d left very little to the imagination. Indeed, few of McCartney’s Esher offerings deviate significantly from the version we’ve come to know so well on the White Album.

And although Ringo contributed significantly to the White Album, there was no original Starr composition proudly presented to the others on that late day in May 1968. Therefore, in Part 1 of our discussion of the Esher Demos, our focus will turn to two of George Harrison’s offerings, “While My Guitar Gently Weeps” and “Not Guilty.”  In Part 2, we’ll consider Harrison’s “Sour Milk Sea” and a clever Lennon contribution: “What’s the New Mary Jane?” And in our final blog prior to the New York Metro Fest, we’ll examine John’s “Child of Nature” and “Julia.”

While My Guitar Gently Weeps — In Rishikesh, India, George was less productive musically than John and Paul because he firmly believed that writing music was contrary to everything The Beatles had journeyed to India to achieve. They were supposed to be (he insisted) retreating from work and the pressures of business; they were supposed to be concentrating on their souls.

Paul later commented on the Rishikesh experience: “I remember talking about the next album, and George was quite strict. He’d say, ‘We’re not here to talk music; we’re here to meditate.’”[iii]  But agreeing to George’s face, Paul kept right on clandestinely writing music…while John meditated but worked openly — looking, all the while, for “a shortcut” to the Inner Light.

But despite their myriad of distractions from the Maharishi Mahesh Yogi’s teachings, the deep influence of India, nevertheless, filled the White Album. Indeed, George was later quoted as saying, “The experience of India was all embodied in that album.”[iv] And nowhere is it heard or felt more than in the reflective, soul-searching Esher version of “While My Guitar Gently Weeps.”

Without being preachy (and George could occasionally be preachy, as in “Within You, Without You”), this quiet song enumerates the sins and faults of his “brothers” and almost pleads with them for repentance and a better way forward.

In this raw, primitive Esher version — minus the urgency of Clapton’s dazzling lead guitar — you can hear George’s heartbreak. Rock’n’roll author of The Recipe Records Series, Lanea Stagg, commented, “You can almost taste the salt of George’s tears.” Pared down to its essentials, Esher’s “While My Guitar Gently Weeps” is even more poignant and touching than its final iteration.

This May 1968 version of the song is the background that we hear playing as Martin Scorsese’s “Living in the Material World, Part II” opens. And it’s an apt beginning to the second half of George’s biography, because with this song, Harrison more or less declares his independence from The Beatle collective and dejectedly, but firmly, sets out on his solo career.

Once this song goes into EMI production — once it’s engineered and filled out — the listener will hear Harrison’s words less clearly, less pointedly. But here, with minimal embellishment, one digests the deep disappointment that George has found in John and Paul:

“I don’t know why nobody told you how to unfold your love,

I don’t know how someone controlled you,

They bought and sold you.”

However, although you can’t miss the sorrow in George’s voice (the regret that things have played out as they have), you can also hear his resolve. He has come to terms with the fact that the world is still turning; he realizes that there are other options for him. And if waiting around too long to be respected has been a mistake, well, “with every mistake, we must surely be learning.” And so, George is sadly — very sadly — realizing that he must now move on.

“While My Guitar Gently Weeps” always tugs at the heartstrings, but never more than when you hear it without any distractions. This is just George from Speke telling his boyhood Merseyside friends how much he has loved them and how much he has suffered…and now, at last, he intends to say goodbye.

In this version, it is George Harrison’s — and no one else’s — guitar that gently weeps.

“Not Guilty” is another of George Harrison’s songs (in the same vein as “Piggies,” “While My Guitar Gently Weeps,” and “Sour Milk Sea”) in which he reprimands his mates for the way they’ve dealt with him through the years.  However, his other songs are rather veiled — somewhat softened. This track is not milquetoast. This is Harrison standing up for himself, without apology, without regret.

In fact, in 1999, George told Billboard Editor-in-Chief, Timothy White, that this song addresses “the grief I was catching from Lennon and McCartney post-India.” He went on to say that he was telling them once and for all that: “I wasn’t guilty of getting in the way of their career. I said I wasn’t guilty of leading them astray in our going to Rishikesh to see the Maharishi. I was sticking up for myself …”[v]

According to Harrison biographer Peter Doggett, in You Never Give Me Your Money, another issue that George was addressing was the incredible amount of money that The Beatles had invested on the launch of Apple. George had always been a sharp-eyed steward of the group’s finances, and in the spring of 1968, he felt that Apple’s extravagances were “too lavish” and unnecessary. In “Not Guilty,” Harrison relents and says he “won’t upset the Apple cart.” But, clearly, George isn’t pleased with the status quo.

The Esher version of “Not Guilty” is clear evidence that by May of 1968, George Harrison was no longer content to be long-suffering, to bite back his indignation, to “get along.” From the secure environment of his own home, Harrison cleared his throat, lifted his head, and sang his lyrics unabashedly — face-to-face with the friends who’d implied that he’d led them astray by convincing them to go to Rishikesh. He stared into their eyes and told them that he had never stood in the way of their progress…and that he had no apologies whatsoever for his behavior. It was a bold move, albeit an emotional one.

In the Esher Demo of “Not Guilty,” you can hear the passion in George’s voice. You can also feel the rigid, awkward silence all around him.

Purchase the re-engineered White Album with the Esher Demos and liner notes HERE.

[ii] Lennon, John, “Beautiful Boy” lyrics, with credit to Allen Saunders, an American cartoonist who created Mary Worth and used this phrase in a piece in Readers’ Digest in Feb. 1957.

[iii] Howlett, Kevin, “On the Road to the White Album,” liner notes for the re-engineered White Album, November 2018.

[v] Huntley, Elliot J., Mystical One: George Harrison – After the Break-Up of The Beatles, 165.