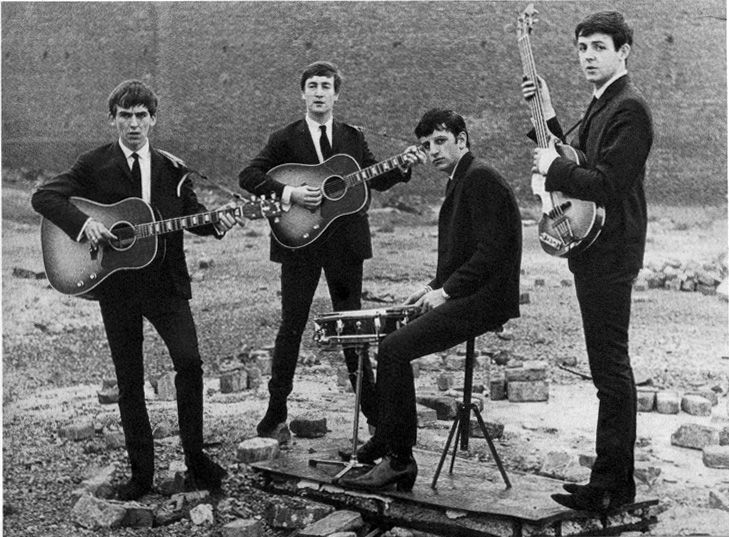 Our 2020 Fest Blog continues to look at The Beatles’ days together, one month at a time. This month, there is an important lesson for us all on how John, Paul, George, and Ringo dealt with April…

April 1962: April 1962 was, without a doubt, the worst that John Lennon would ever experience: a dark and tragic month well-deserving of T. S. Elliot’s “April is the cruelest month” label. After being separated from his “brother,” his soul mate, Stu Sutcliffe, for three months’ time (whilst The Beatles rocked England and Stu studied art with Eduardo Paolozzi in Germany), John and Stu were to be reunited. Full of happy anticipation, The Beatles landed in Hamburg, Germany on 11 April for the happy “coming together” of these two fast friends. But instead of being greeted by Stu at the airport, John was greeted by Stu’s fiancée, Astrid Kirchherr — whose face was grim. She was meeting The Beatles to inform them that Stu had died of a brain hemorrhage, less than 24 hours before their arrival. John had just missed saying goodbye to his closest friend, just as John had lost his beloved Uncle George in 1955, without a chance to say goodbye…and his mother, Julia, without a final word in 1958. Now, Stu was gone as well.

For John, it was utterly overwhelming. He collapsed into tears and hysterical laughter. And he spent the ensuing month, inebriated and completely out of control. One evening found him on stage, wearing a toilet seat around his neck. And one early morning found him in the Hamburg streets, wearing only his underwear and cap — perusing the morning newspaper.

April 1962 seemed a place from which there was no recovery. And truly, in the years ahead, the other Beatles knew better than to mention Stu’s name in conversation. It summoned a darkness that didn’t lift for days. John never totally recovered from the loss of his best friend. But somehow, life did go on. And despite the crushing grief of 1962, John’s future did grow brighter. He found a way to put one foot in front of the other. And he did survive.

April 1964: Only 700 days later, John was not only on his feet again, but he was being fêted at London’s elegant Dorchester Hotel as the most acclaimed author in Great Britain. His first book, In His Own Write, was not only selling millions of copies but also surprisingly being heralded by critics as remarkable. Lennon’s mixture of bizarre poetry and prose was favorably compared to Lewis Carroll, James Joyce, and Edward Lear. Thus, John — as Foyles Bookstores’ Literary Award Winner — was asked, on Shakespeare’s 400th birthday, to deliver the annual address to the learned world.

But “The Smart Beatle” — though comfortable singing on stage with his mates— was extremely ill-at-ease when delivering a public speech. So, he turned the obligation over to his manager, Brian Epstein.

However, we all know that if things can go wrong, they will, and through a series of simple misunderstandings, John was very publicly called upon to deliver that postprandial speech himself on that celebrated day. Mortified, John stood and fumbled his way through the brief words that a Liverpool beggar mutters when he’s given a handout — something that he doesn’t feel that he deserves. “Thank you very much! You’ve got a lucky face!” John eked out. Then, he quickly sat down to a wave of “boos” and hisses. Quite fortunately, Epstein was permitted to stand and deliver the speech for John. And in the end, as the birthday boy once said, “All’s well that ends well.” The mishap was righted.

Most of April 1964 was filled with eventful and happy moments…with awards, #1 hit records, the making of “A Hard Day’s Night,” and far too many honors for The Beatles to mention here. Beatlemania was at its intense apex. And the dark days of 1962 were, for the most part, only a memory. Good had returned, in force, to The Beatles.

April 1965 – One year later, The Beatles were the undisputed Kings of the World. They spent the early part of April in Austria, filming scenes for their second United Artists’ movie, “Eight Arms to Hold You,” later known as “Help!” The boys had already recorded a good bit of the film’s soundtrack, but they were working on other songs. John was publishing his second book of poetry and prose, A Spaniard in the Works. And at the end of the month, The Beatles were in London’s Twickenham studios, finishing up their film. In between time on the movie set, John, Paul, George, and Ringo were doing interviews for the BBC and looking ahead to yet another World Tour. The Beatles were busy, productive, and engaged. The shadow of April 1962 only fell, now and again, on John. The rest carried on.

April 1969 – John had at last found a new soul mate, a partner he loved as deeply as he’d loved Stu. He had fallen for Japanese artist, Yoko Ono, and on 1 April, the couple returned to London after their much-publicized Amsterdam honeymoon “Bed-in for Peace.” Whilst privately wondering if John had “gone mad,” the press welcomed the newlyweds back with unexpected gusto. This, of course, inspired John to write “The Ballad of John and Yoko,” which Paul would (in May) help John record in studio. It would be one of their last happy collaborations, as The Beatles stood on the brink of solo careers. In just a few weeks, Ringo would begin filming “The Magic Christian” and George would fly off with Pattie Boyd to Spain, but in April, the boys were still The Beatles…one last time.

The great loss of Stu Sutcliffe in April 1962 colored John’s life, to be sure. And Stu was never forgotten as John penned “In My Life” and faithfully lived out Stu’s suggestion that The Beatles be “a work of art and not just a band.” But though Stu’s death was a tremendous tragedy, it was not an end. Happiness waited patiently ahead.

As all of us are struggling through this horrific month of illness and economic crisis, once again The Beatles show us that there is a future after disastrous times. Their story reminds us that there will surely be moments in the days ahead when we will once again achieve, create, spend time with friends, and live normal lives. Not even the shadow of death can defeat us.

We can all shine on. And we must…