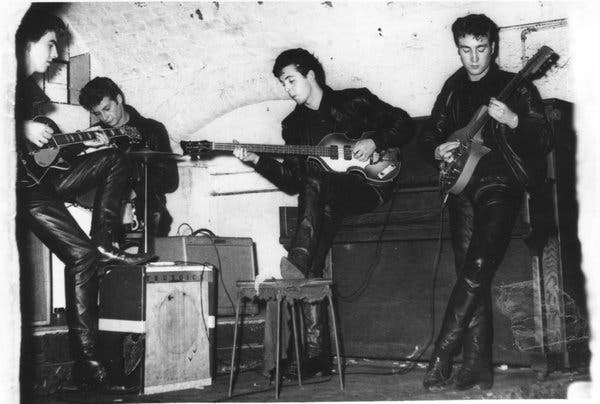 The FEST for Beatles Fans has been tracing the “doings” of The Beatles, month-by-month, throughout their years together to see if we can glean a bit o’ wisdom from what “the lads” did in the seasons of their lives. From January’s events, we learned the value of industry and hard work. From April, we learned that suffering isn’t forever and will surely be followed by happier days!

What can we glean from the experiences that John, Paul, George, and Ringo shared in their Mays together? Well, let’s find out with John Lennon biographer, Jude Southerland Kessler…

May 1961 – The Beatles, in Hamburg for a second rollicking time, have been given the opportunity to actually cut a record — as a back-up band for headliner, Tony Sheridan. Though they were contracted to play at the Top Ten Club, the boys had been sneaking over to the Star Club, according to Tony Sheridan, and singing with the star on stage, and the Liverpool lads were quite popular there! As it happened, Sheridan — who had just been signed by music mogul, Bert Kaempfert, to a contract with Polydor Records — was looking for a back-up band to assist him with his first release. Naturally, he selected the popular Beatles and directed them to meet him “in studio.” Paul recalls, “We…expected a recording setup on a grand scale…Instead, we found ourselves in an unexciting school gym with a massive stage and lots of drapes.” But despite The Beatles’ clear disappointment, the boys (as The Beat Brothers) gave their back-up rendition of “My Bonnie” and “When the Saints Go Marching In” their all! And it’s THIS record — requested months later of Liverpool NEMS owner Brian Epstein — that induced Epstein to visit the Cavern Club on 9 November 1961 and “meet The Beatles.” That Hamburg school gym recording studio may not have been what the boys anticipated, but the results — which are still being felt today — were quite unanticipated as well! The modest recording studio led The Beatles down “a long and winding road” of lasting fame.

May 1964 – After completing their first film for United Artists, “A Hard Day’s Night,” The Beatles set out on some much-needed breaks. George and John, who’d decided to holiday together, traveled happily with John’s wife, Cynthia, and George’s girl, Pattie Boyd. Now, the concept of a yacht moored just off Papeete, Tahiti sounded divine after two long months of early mornings on set, 8-hour days filming, nights in EMI’s Studio Two recording a soundtrack LP, and many additional interviews and television shows sandwiched into the boys’ spare time as well. But once on board the rather ramshackle boat — with a sparse menu featuring primarily potatoes and a library with only one book (The Adventures of Sherlock Holmes) — John became fiercely bored. He discovered that he was much happier filling his days with creative work. So, he began writing songs (such as “Any Time at All,” for Cynthia) and penning pieces (“Snore Wife and the Seven D…”) for his second book, eventually entitled A Spaniard in the Works. George complained that John — who’d been going on for weeks and weeks about “needin’ peace” — now only wanted to work. It was what Lennon truly longed for — John found out.

May 1967 – After working for weeks on their most unusual and controversial LP to date, in May of 1967, The Beatles were releasing Sgt. Pepper’s Lonely Hearts Club Band to a waiting world. And to celebrate what he thought would be the LP that encouraged his boys to brush shoulders with the public once again (perhaps even tour!), Brian Epstein celebrated via a lavish party in his Belgravia flat. Inviting in the “Who’s Who” of London, Brian expected John, Paul, George, and Ringo to serve as co-hosts — meeting and greeting the posh public. However, the boys arrived “rather out of it.” In fact, John — in a faux fur-lined, orange, print jacket — was deliriously giddy. Even Paul, who was customarily the group’s spokesperson, was rather agog that evening when an enchanting, blonde, American photographer he’d met four days earlier, Linda Eastman, knelt down in front of him to capture his picture. Deeply engaged in conversation, the two seemed quite taken with one another, and Brian was left to entertain his guests on his own.

May 1968 – Inviting his three friends to his Esher bungalow late in May, 1968, George Harrison anticipated a fun and relaxing afternoon. Sitting together on low, backless sofas, or wide, decorative cushions, The Beatles shared with one another the songs they’d been writing throughout the spring — both during their time in Rishikesh, India, and then back home in England. John demonstrated unpolished germs of remarkable songs. Paul offered up a tape of more perfected work. And George, wanting to remember the special afternoon, decided to record it all…just for fun. How surprised George would’ve been to see the impact of 2018’s remastered Esher Demos, his tape of that afternoon — the priceless seminal rendition of what would morph into the White Album. A lazy day shared by four friends in the British countryside was transformed: a priceless peek into The Beatles’ private lives and their methods of creating and recording music. What set out to be a jam session, more or less, ended up becoming a classic work of musical genius.

The Beatles’ Mays together seem to say one very Forrest Gump-ish thing, “You never know what you’re going to get.” Expecting Bert Kaempfert to afford them a lavish recording studio, the boys got a school gym recording space. Expecting that rather amateurish recording (so it seemed) to fall by the wayside, “My Bonnie” spawned sixty years of unequaled fame. Expecting a holiday on a yacht to calm his spirit, John Lennon discovered he craved work, and expecting an afternoon jam session to be just a bit of “in house” amusement, The Beatles inadvertently, “cut a record.” The boys’ days together in the “merry month of May” always afforded a wealth of surprises. Time and again, they were amazed…well, MAYbe.