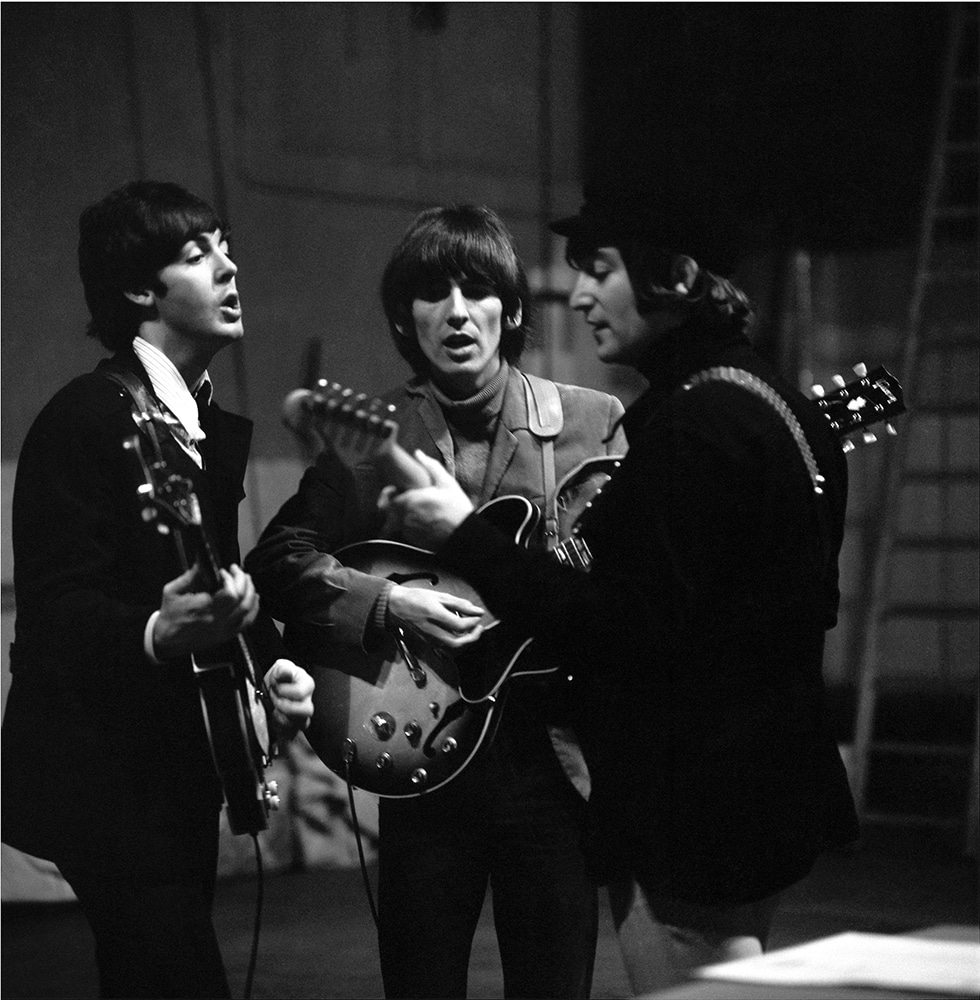 Side One, Track Four

Harrison’s Mantra: “Think for Yourself”

Through 2021, the Fest for Beatles Fans blog has been exploring the nooks and crannies in The Beatles’ remarkable 1965 LP, Rubber Soul. This month, Fest Historians Panel member and editorial staffer for the respected Beatles fanzine Octopus’ Garden, Janet Davis, joins Jude Southerland Kessler, author of The John Lennon Series, for a deep dive into one of George Harrison’s two original songs on the trend-setting album. Join them for an exploration of “Think for Yourself.”

Second Engineer: Ken Scott (and Jerry Boys, according to Margotin and Guesdon)

Stats: With a working title of “Won’t Be There with You,” this song was recorded during the early part of this lengthy session, and The Beatles’ annual Christmas flexi-disc was recorded later. Strangely, the entire session (not just the recording for the flexi-disc) was recorded, and knowing this, The Beatles put on quite a show! John Winn, in Way Beyond Compare, tells us that they exaggerated their Scouse accents and hammed it up. Winn says, “…references [were] made to Juke Box Jury, Cynthia Lennon, TV deodorant jingles, “Yesterday,” Rocky Marciano, the Supermarionation series Supercar and Stingray, uptight thespians, Frankie Howerd, “Do You Want to Know a Secret,” Woody Woodpecker, and Humphrey Bogart.” (p. 374)

The backing track was captured in one take, with many superimpositions to follow.

There is a great deal of disagreement among Beatles music experts as to who is doing what on this track. Here are all of the options. Please listen to the song once again and then, “Think for Yourself.”

Ringo Starr plays one of his Ludwig Oyster Black Pearl Super Classic drum sets, mans the cowbell, and possibly the tambourine. In superimpositions, Ringo added in maracas and tambourine.

The unusual bass distortion featured in “Think for Yourself” is provided by a fuzz box, employed by Paul McCartney. Some sources state that Paul is using a Gibson Maestro Fuzztone distortion box while others say he is using the Tone Bender fuzz box MK1, adding that it is the same fuzz box he used for the recording (years later) for “Mean Mr. Mustard” on Abbey Road. For a lengthier discussion, check the sources below. Beatles Gear includes a thorough discussion of all the “ins and outs” on this particular issue. This is quite a debate!

Sources: Lewisohn, The Complete Beatles Chronicle, 205, Lewisohn, The Recording Sessions, 67, Everett, The Beatles as Musicians: The Quarry Men Through Rubber Soul, 330-331, Margotin and Guesdon, All the Songs, 288-289, Winn, Way Beyond Compare, 373-374, Hammack, The Beatles Recording Reference Manual, 90-91, Turner, A Hard Day’s Write, 92, Spizer, The Beatles for Sale on Parlophone Records, 200 and 202, and Babiuk, Beatles Gear, 173, http://www.beatlesebooks.com/think-for-yourself, and Think For Yourself – The Beatles Bible.

Harrison’s inspirational motives aside, “Think for Yourself” does show a divergence into topics unrelated to happy or unhappy love relationships. The Beatles of Rubber Soul are now composing story songs, wryly humorous songs, and this track: a blunt statement of utter disgust. Variety was the order of the day. And the LP’s diversity certainly appealed to New Musical Express critic Allen Evans, who upon Rubber Soul’s release wrote: “[The] great thing about this LP is that The Beatles are finding different ways to make us enjoy listening to them.” (Spizer, 200)

It’s an honor to welcome Janet Davis this month to give us a fresh, new look at this George Harrison track. Attending her first “Beatlefest” in 1979, Janet has been an integral part of various expert panels at The Fest for Beatles Fans, including the Historians Panel. She is on the editorial staff for one of only two extant Beatles fanzines in the U.S. today, Octopus’ Garden. And recently, Janet served as editor for the upcoming book about North American Beatles Fan Clubs by author Sara Schmidt, Dear Beatle People.

Jude Southerland Kessler: Janet, across the board, Beatles music critics point out that the lyrics of “Think for Yourself” are rather pedantic. To what are they referring? And is George’s tendency here, to teach or preach, a “clue to the new direction”? How does “Think for Yourself” prefigure later Harrison songs?

Janet Davis: As you noted above, Jude, George himself never fully explained what the song is about. He said in I Me Mine (1980), “…I don’t quite recall who inspired that tune. Probably the government.” The lyrics can be read as dialogue with a former romantic partner, dislike of bureaucracy, self-motivation, or any combination of these themes. The overarching message is that each of us should listen carefully to our inner selves above all else.

For the first time ever, George’s words are strongly introspective as well as fairly ambiguous. That’s a blueprint he revisited consistently throughout his career. Many of his lyrics can be read as either prayers or love songs, for example. George lets listeners choose the way they internalize his meanings. The seeds were planted with “Don’t Bother Me,” and two years later, with “Think for Yourself,” George found the authentic songwriting voice he used for the rest of his life.

Kessler: This was the first song in the Beatles catalog (and one of the first in rock’n’roll) in which a fuzz box was attached to the bass…and it was George’s idea to do so! Where did George get this idea, and what does the fuzz box add to the song?

Davis: George explained in Anthology that he first heard the fuzz box effect on “Zip-a-Dee-Doo-Dah” by Bob B. Soxx & the Blue Jeans, back in 1962. Phil Spector was producing the song and accidentally created the distortion by overloading the guitar player’s microphone.

There are actually two bass lines in this song, with the second utilizing the fuzz box and played more like a lead guitar. Trying the effect with Paul’s bass was simply the result of experimenting in the studio – they all liked the sound!

As you mentioned above, there are conflicting accounts of which pedal was used. We may never solve this mystery, but the blurry, snarly fuzz box bass is a perfect complement to the song’s edgy attitude.

Kessler: “Think for Yourself” gets scanty praise. Tim Riley in Tell Me Why, for example, characterizes the song as “flaccid.” George had so little memory of the track that he couldn’t recall why he wrote it or for whom! What do you find noteworthy or interesting about this track?

Davis: I think this song is mistakenly underrated, Jude. It’s actually a bold step forward for George as a songwriter.

At the time he wrote this song, George was in the shadow of the two most celebrated songwriters of the era, newly influenced by Bob Dylan, and still processing his LSD experience with John earlier in 1965. Three years of Beatlemania had taken their toll. George was ready to think and write in a more sophisticated way, and able to keep up with John and Paul’s innovative work on Rubber Soul.

Just a few months ago, the UK website Far Out Magazine referred to “Think for Yourself” as “quite possibly the archetypal tune for the composer, not only delivering a thought-provoking piece of pop but adding a touch of sourness to [the] proceedings, too.” On such a groundbreaking album for The Beatles, the track may get lost. But it’s really the start of George’s development as a mature, unique songwriter. For that alone, it deserves to be celebrated.

Kessler: What are some things about “Think for Yourself” that we haven’t yet discussed? What would you like to tell us about the song?

Davis: Even though it’s a driving, energetic song, neither The Beatles nor George ever performed “Think for Yourself” in concert. George and Eric Clapton played it in rehearsals for their 1991 Japan tour, but that’s as close as we get to a live performance. Also, “Think for Yourself” was recorded in just a single take with overdubs, which means it’s a rare Beatles track without multiple versions or outtakes.

In closing, I often think of this line in the song: “The future still looks good / and you’ve got time to rectify all the things that you should.” That was George at 22. Thirty-five or so years later as his life was drawing to a close, George asked poignantly in “Pisces Fish,” “Have we time to sort all these things out?” In those bookend lyrics, one at the beginning of his adult life, the other at the end, George is saying that what’s most important is within us. Take the time to find it. I think that was one of his most powerful messages.