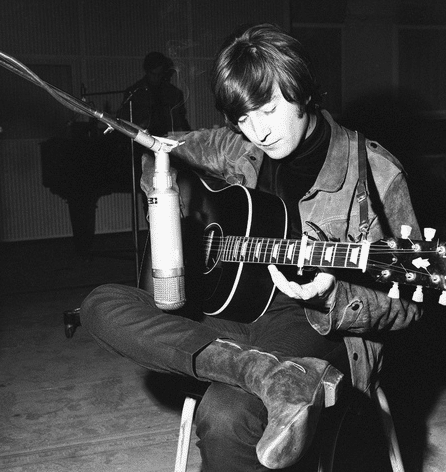 The Fest for Beatles Fans hopes you’ve been enjoying some fresh, new perspectives on the Rubber Soul songs you’ve known and loved since 1965. Our goal is to give each song a new look, and if you like that perspective, wonderful! If you have an interesting viewpoint of your own on the song, please share it! And if you’d like to continue listening to the song as you always have, shine on! We’re enjoying re-examining these classics (after 50 plus years) with some of the world’s most revered Beatles music experts and uncovering fresh perspectives to enrich what we know. And…we’re so glad to have you along!

Date Recorded: First attempt on 21 October, with a complete remake on 22 October (followed by superimpositions and mixing on the 25th and 26th of October as well as 22 November)

Second Engineers: Ken Scott (and according to Margotin and Guesdon, Ron Pender)

John Lennon, the composer, sings lead vocals and plays his 1964 Gibson J-160E acoustic guitar for the rhythm track and in superimposition, plays lead (with George) on his Fender Stratocaster

George Harrison sings backing vocal (McCartney and Harrison are double-tracked) and in superimposition, plays lead (with John) on his 1961 Fender Stratocaster

Recently, we were honored to be able to talk with distinguished historian, Al Sussman, about “Nowhere Man.” Al is the Executive Editor for Beatlefan magazine and has for many years been an integral part of The Fest for Beatles Fans.  He is also the author of Changin’ Times: 101 Days That Shaped a Generation and was a contributing author to Bruce Spizer’s The Beatles Finally Let It Be, The Beatles Get Back to Abbey Road, The Beatles and Sgt. Pepper: A Fan’s Perspective, and The Beatles White Album and The Launch of Apple. Here are Al’s insights into John Lennon’s honest and heartfelt 1965 ballad, “Nowhere Man.”

Jude Southerland Kessler: Al, journalist and Beatles friend, Ray Coleman, in his book, Lennon, says that in John’s 1965 classic hit: “The Nowhere Man is an impotent, hollow symbol of the Swinging Sixties.” And similarly, Steve Turner in A Hard Day’s Write says that “Nowhere Man” was interpreted by some as “a comment on the erosion of belief in modern society.” Please tell us about the historical backdrop of 1965 that fueled this solemn portrait of an empty, vacuous world.

Al Sussman: A less-oblique, more directly personal song than “Nowhere Man” is Brian Wilson’s “I Just Wasn’t Made For These Times,” which was written around the same time as “Nowhere Man” and appears on the Beach Boys’ classic Pet Sounds album. Living in the hothouse atmosphere of the mid-60s was not easy, particularly for a still-young man in a leadership position in what John later called “the greatest show on earth/For what it was worth.”

With an ongoing war in Vietnam, racial unrest not just in the U.S. but in England, too, an emerging drug culture, and a media hungry for The Beatles’ views on all of this, it was easy to believe in the “erosion of modern society.” Much has been written about how The Beatles had each other to get them through the madness that surrounded them but, by mid-1965, the only one still residing in Swinging London was Paul. The others had all bought homes in the stockbroker-dominated suburbs. So, living in a mansion and in a marriage that he felt wasn’t giving him fulfillment, John was truly isolated, and his increasing intake of pot and other drugs wasn’t helping. Hence, his feeling that he was “A real nowhere man/Sitting in his nowhere land/Making all his nowhere plans for nobody.”

Kessler: In Tell Me Why, Tim Riley observes that in “Nowhere Man,” John Lennon reminds us that “no one can make it through life’s difficulties alone…the best crutches are other people.” (p. 162) What were some of the personal difficulties with which John struggled in 1965? What circumstances made him feel like “a real Nowhere Man living in his nowhere land”?

Sussman: It’s interesting to consider that, in 1965, John Lennon wrote “Help,” “You’ve Got to Hide Your Love Away,” and “Nowhere Man,” all of which reflected the isolation he was experiencing in his new suburban life away from “the eye of the hurricane.” It was John who later called this his “fat Elvis” period, and not just for the few extra pounds he had put on. Of course, it’s a mark of the complexity of the man and the composer that he also wrote “In My Life,” “It’s Only Love” and, yes, “Norwegian Wood” during this same period. Not being as natural a pop craftsman as Paul, it could take some cajoling from those “best crutches,” but the isolation seemed to inspire one of John’s finest composing periods.

Kessler: I know you really like this song, Al. What elements make this song one of your favorite Beatles numbers? Is it the music, the lyrics, the message, all of the above…or something else?

Sussman: I had very much been a fan of the John/Paul/George three-part harmonies on songs like “This Boy” and “Yes It Is” and, during ’65, I’d become very attached to the emerging folk-rock sound. So, when I first heard “Nowhere Man” on WABC in New York, when they briefly played the four tracks from the British Rubber Soul not on the American edition, I instantly fell in love with the song. I loved the three-part harmony vocals and the background vocals and the Byrds-influenced instrumentation.

Frankly, I could also relate to John’s lyrics, even as a 16-year-old. And I was disappointed, when It was released as a U.S. single in Feb. 1966, that “The Ballad of the Green Berets” kept “Nowhere Man” from continuing the string of Beatles No. 1 singles. That autumn, as a high school junior, I took a Modern Communications course and, at one point, the teacher had us bring in lyrics to a popular song of the time. Most of the kids in the class didn’t take it very seriously and brought in lyrics for typical love songs of that moment (“I’m Your Puppet”), but I brought in “Nowhere Man,” even though, at that point, I didn’t know the real meaning behind it. All these years later, “Nowhere Man” is still among my top five favorite Beatles songs, and it’s aged exceptionally well.

Kessler: What would you like to share with us about “Nowhere Man” that we haven’t discussed in this blog?

Sussman: Younger fans have somehow gotten the impression that the reason why “I’ve Just Seen A Face” and “It’s Only Love” were added to the U.S. Rubber Soul, was so the album would sound more folk-rock. Frankly, the middle-aged big band/Sinatra-philes who were running American record companies in the mid-60s wouldn’t have known folk-rock if it hit them in the face. The two most folk-rock-esque songs on the U.K. LP were George’s very Byrds-derived “If I Needed Someone” and John’s “Nowhere Man” — neither one of which made the Capitol album.