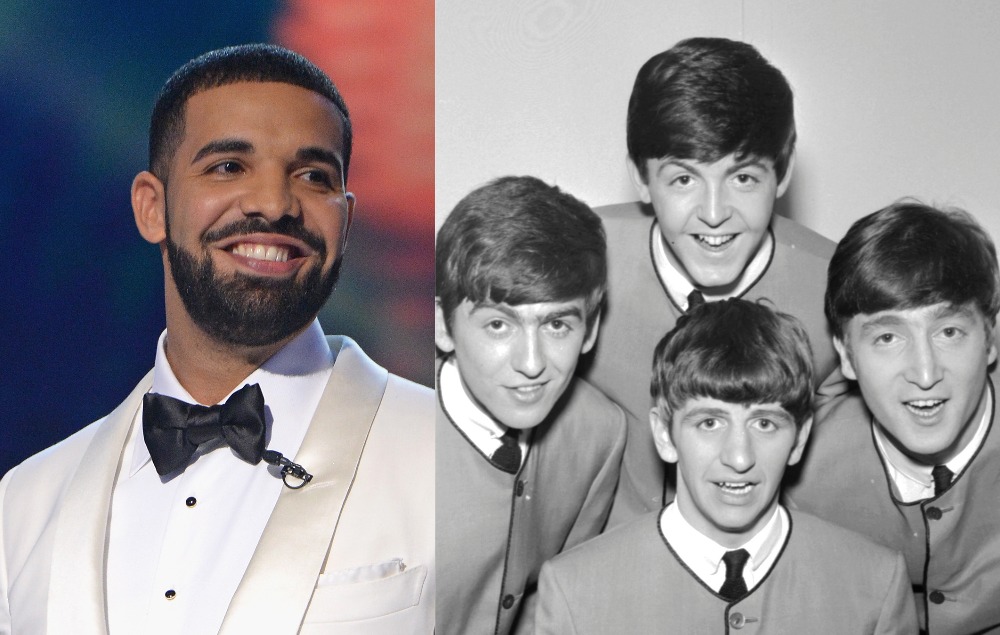 To give you an idea of the kind of interesting topics that will be covered, here is Lanea Stagg’s comparison of The Beatles chart-blasting record to Drake, who claims to have surpassed The Beatles’ 1964 accomplishment of 5 songs in the Top Ten at once. Is it a valid claim? Has Drake stolen the crown from our Fabs? Read on…

This summer, news media outlets began reporting that pop star rapper, Drake, had surpassed The Beatles’ accomplishments on the Billboard “Hot 100” chart. Even last week it was reported that he surpassed another chart record belonging to The Fabs. I have been inclined to blame it solely on “Fake News.”

But, in an effort to be fair, I have opened my mind to Drake. According to pop music lovers today, 31-year-old Drake creates music which is a softer alternative to rap, bypassing hardcore gangster rap and infusing catchy love lines to hook the girls. I spoke with one 20-something male who explained to me that he didn’t like Drake’s music at first, but “girls like Drake … so eventually, the boys have to like Drake, because then they’re going to win the affection of the girls.” Does that sound familiar?

Today’s Top 100 Billboard charts have become a completely new environment for music artists. Music streaming and downloading have become an important component in the statistics collected to determine pop song success. It is fair to surmise that today’s metrics for determining chart success is not what we grew up with. On April 4, 1964, The Beatles held the top 5 slots on Billboard’s “Hot 100” chart. The charts at that time were driven by record sales and radio play. Today’s charts, however, are driven by downloading and streaming with a little bit of radio and physical sales sprinkled in.

Donald S. Passman, wrote in his book All You Need to Know About the Music Business, “When the Beatles were around, there were horrible (accounting) records of who sold what. Nobody knew how many records were sold in retail, only how many were shipped to the store.” So even if the records went back to the company, the statistics were likely inflated. But at the same time, it was a lot more difficult for an artist to sell records and to get on the radio simply because there were physically fewer retail stores, radio stations and listening opportunities – there were no cell phones or social media. Today’s false inflation of sales data creates an inaccurate perception of chart success.

I found it quite interesting to look at how the charts are measured today and driven by consumer listening habits. I questioned how people are listening to music, interviewing and surveying 200+ college students in Columbia, Missouri. Here is what I found, and the data directly affects chart ratings:

99% of the group listen to music via cell phone.

42% use other paid subscriptions such as Apple Music, XM Radio, Amazon Prime, or Pandora;

20% actually purchase music via CD’s, iTunes, vinyl, etc. (which is shocking and exciting);

40% use the most popular paid subscription: Spotify.

Nearly all of the 128 students who purchase Spotify receive a discounted student rate: only $5 per month for unlimited music. This means they are allowed to stream and download millions of songs – 35 million to be exact. One student told me that Spotify has replaced listening to the radio. The music subscription creates its own playlists, and they tailor playlists based upon your past listening history. Spotify also sends listeners e-mails, i.e.: “Drake has a new album out.” And you can follow your friends and see what they are listening to as well.

Meanwhile back in 1964, Beatles fans were listening to The Fabs in conventional locations – in front of the only family television or on the radio in the family wagon, and who remembers that joyful scene in “That Thing You Do!” when the band heard their record for the first time on a transistor? A nostalgic, exciting moment – however, this mode of listening has all but disappeared.

So, what does this have to do with our topic? Drake vs. The Beatles?

Well, we all know that The Beatles climbed the charts – one physical record sale at a time. But for Drake, the climb to the top happened rapidly, via the aforementioned instant downloads.

Let’s take a look at this past summer, for example. On July 14, 2018, Drake “dominated” the Billboard “Hot 100” chart – seven spots in the Top 10 belonged to Drake. Multiple media outlets, and Drake himself, reported that he had “surpassed The Beatles’ record of five hit songs in the Top 10 at once.

It should be noted that on June 29, 2018, Drake released his 25-track disc titled “Scorpion,” and all 25 songs were on the Billboard “Top 100” chart immediately. So, when his entire disc of 25 songs was released, definitely the Spotify kids had it on their phones instantly – and so it gets tallied and accounted instantaneously.

Even the controversial media outlet BuzzFeed wrote on September 13, 2018, that “Spoofing Spotify by fans – (is) eroding the metrics of Billboard charts.” Remember that half of the students in my collegiate test group purchased Spotify for only $5/month. That allows them to download and stream all the music they can listen to (35 million songs!!) for only $5. Washington Post reporter, Travis Andrews, astutely observed, “The charts have struggled to come up with a streaming equivalent to an album purchase – or a song download. [But one must bear in mind that] it was harder to purchase The White Album than to put a stream of “Lemonade” on repeat, after all.”

The Senior Vice President of Charts and Data Development at Billboard magazine said this summer, “What we do is react to the marketplace around us. I think we are fairly nimble on downloading and even more so on streaming, to make sure we’re reflecting where the music consumer is going. Where that will end up, though…I don’t know.”

Why do charts matter, anyway? Charts matter mostly to record companies in terms of market share or clout. The music consumer isn’t as driven by the charts.

One example of record sale success overshadowing chart success happened in ’67 when “Strawberry Fields Forever” and “Penny Lane” were released as a double A-side 45-rpm. Early predictions were that this single would perpetuate The Beatles’ unprecedented achievement of 12 straight Number 1 singles in the UK. However, the 45 was not released as one single, but two. This divided the sales data between the two songs, and hence, Engelbert Humperdinck’s “Release Me” took the Number 1 spot on the “Hot 100” over our Fabs, breaking their four-year “roll” as George Martin called it. However, “Strawberry Fields Forever” and “Penny Lane” 45–rpm sold 2.5 million copies, outselling Humperdinck two-to-one. Indeed, chart success in this case and many others does not guarantee either the superior sales success or music superiority of the record.

If you give Drake an honest, fair chance, it is apparent that he has achieved success. He is chart-topping. He is Grammy award-winning and platinum-selling, not to mention charming and charismatic. And oh yeah…his dad was the drummer for Jerry Lee Lewis. So, we can’t ignore that something is happening with this powerhouse. Many thought that The Beatles were a fad, so I try to consider that when I analyze today’s music trends. But in my opinion, Drake is primarily a brilliant marketer. Let’s give credit for Drake’s popularity where that credit is due: to downloading and streaming. Should we mark our calendars and plan for HIS “White Album” celebration in 50 years? Tomorrow never knows.

Lanea Stagg is the author of the Recipe Records Cookbook Series: Recipe Records, Recipe Records-The 60s Edition, Recipe Records-A Culinary Tribute to The Beatles, and The Rolling Scones: Let’s Spend the Bite Together. The series combines music trivia, quips, quotes, and playlists with clever recipe titles that pay tribute to great music of many genres and decades.  In addition to the series, she has authored children’s books, a blog, and contributed to entertainment publications, along with co-hosting BlogTalkRadio program: “She Said She Said,” with Jude Southerland Kessler, the author of The John Lennon Series. Lanea will be giving a presentation on this topic at The White Album Conference next week at Monmouth University.