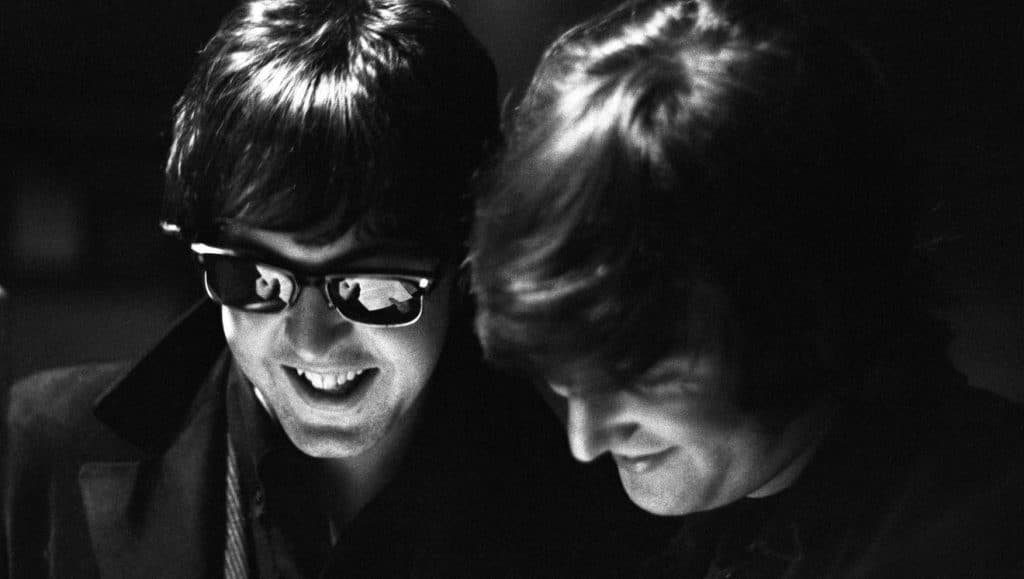 Side One, Track One

“Drive My Car”: And Suddenly, Everything Changed!

Throughout 2021, the Fest for Beatles Fans blog will explore the intricacies of The Beatles’ astounding 1965 LP, Rubber Soul. This month, Kenneth Womack, author of Long and Winding Roads: The Evolving Artistry of The Beatles, Maximum Volume: The Life of Beatles Producer, George Martin, and his new best-seller, John Lennon 1980 (among many others) joins Jude Southerland Kessler, author of The John Lennon Series, for a fresh, new look at the exciting opening track of this pivotal LP.

Stats: Recorded in only four takes. “Best” take was Take 4. However, a plethora of overdubs completed the song in later sessions.

There is much debate among experts about whether George is playing the song’s lead line or whether it is performed by Paul McCartney. In 1977, George said in an interview: “I simply played a guitar line that was, in fact, very close to ‘Respect’ by Otis Redding. I played this part, and Paul followed me on bass.” However, in The Anthology, George said, “I played the bass line on ‘Drive My Car.’ It was like the line from ‘Respect’ by Otis Redding.” (p. 194) Many experts feel that Paul played the bass line and also played the lead solo. (Winn, Way Beyond Compare, p. 363, Hammack, The Beatles Recording Reference Manual, p. 66)

There are two schools of thought on the introduction and coda. In All the Songs, Margotin and Guesdon, assert that the song’s opening intro was played simultaneously by George and Paul. (p. 277) Winn, however, credits the lead solo, intro, and coda to Paul alone.

One thing is certain: no longer were there inviolable “roles” in the creation of Beatles songs. The boys were beginning to branch out and play what was needed when it was needed. From henceforth, nothing would be the same.

Instead, they are the “unkind” female of “What Goes On.” They are the female “who puts you down when friends are there” in “Girl.” In “Think for Yourself,” we see them telling lies. And in “Run for Your Life,” they are suspected of being unfaithful. Even the least offensive female, in “You Won’t See Me” practices avoidance techniques and “refuses to even listen.”  Hard-hearted women, all.

The female protagonist of “Drive My Car” is no exception. She is an aggressive, aspiring actress with her own agenda.  This woman is determined, and her saga sets the attitude for the rest of the LP. The Beatles’ altering attitude toward relationships demonstrates the boys’ new, wide-eyed maturity. As Tim Riley observes in Lennon, “The Beatles had outgrown the teen market that once defined them and reshaped rock…with adult characters, situations, and inner lives.” (p. 287)

“Drive My Car” may make us smile, but its quirky ending makes that smile a wry one. Since the phrase “drive my car” is blues slang for sex (Margotin and Guesdon, 276), fans here observe the “dominant male” role shifting in Rubber Soul’s opening track. (Of course, The Beatles quickly doubled down with a second woman-dominated encounter in “Norwegian Wood.”) Betty Friedan’s 1963 work, The Feminine Mystique, championing the female’s “fully equal partnership with men” had fashioned a remarkable change in society. Here, The Beatles (who were always, as Lennon observed, in “the crow’s nest”) inculcated this emerging mindset into Rubber Soul.

Recently, we sat down with noted Beatles expert (author of John Lennon 1980) and biographer of Sir George Martin, Dr. Kenneth Womack, to discover what is going on behind the scenes in “Drive My Car.”

Kessler: Ken, as you know, John Lennon had traditionally been the Beatles’ “official/unofficial” LP opener. On With The Beatles, John opened the album with “It Won’t Be Long,” and on the A Hard Day’s Night soundtrack, it was John’s “A Hard Day’s Night” that led listeners into the grooves. On Beatles for Sale, John once again led the way with “No Reply.” And naturally, with the Help! LP, fans commenced their musical journey with John’s “Help!” Then came Rubber Soul, and fans discovered an LP opened by Paul McCartney singing “Drive My Car.” Is this new role for McCartney perhaps a “clue to the new direction”? Are the band’s leadership roles shifting by late 1965?

Womack: “Drive My Car” marks a number of intriguing shifts in the group’s internal calculus. In the case of the song’s placement on the LP, Rubber Soul was the first Beatles album in which the band members themselves had input into the sequencing of the record’s contents. Prior to Rubber Soul, George Martin held sway over most of the presentation of the Beatles’ work. To my mind, Rubber Soul is the turning-point LP where the Beatles take charge of their music as an artistic body of work. As Paul later remarked, “We gradually became the workmen who took over the factory. In the end, we had the run of the whole building. It would be us, the recording people on our session, and a doorman. There would be nobody else there. It was amazing, just wandering around, having a smoke in the echo chamber. I think we knew the place better than the chairman of the company because we lived there. I even got a house just ’round the corner, I loved it so much. I didn’t want ever to leave.” (The Anthology, p. 93) In short, Rubber Soul marked a new direction for the band in more ways than one.

Kessler: One of the elements of early Beatles music that attracted female fans was The Beatles’ admiration for songs written by females. They covered hits by the Shirelles, Donays, Marvelettes, etc. and in doing so, expressed a unique feminine voice, a singularly feminine point of view. How does Paul successfully achieve this, once again, in “Drive My Car”?

Womack: I’ve long interpreted “Drive My Car” and “Norwegian Wood” as being cut from very similar cloth. As with such compositions as “Ticket to Ride” and “Day Tripper,” “Drive My Car” and “Norwegian Wood” are key examples of Lennon-McCartney’s proto-feminism. In these particular songs, they depict very strong, self-assured female characters. In each instance, these female characters call the shots, refusing to be subservient to their male counterparts. To my thinking, these are revolutionary songs in terms of the Beatles presenting female-positive characters. As songwriters, Lennon and McCartney were ahead of the curve in terms of the ways in which they presented these strong female characters—and pointedly, for a very large female audience across the globe.

The band deserves great credit for their egalitarian approach to the world in an era when they were clearly on the vanguard. This was true both in terms of issues associated with feminism and race. With “Drive My Car,” McCartney was clearly speaking directly to a large segment of the group’s demography. From their earliest days as hitmakers, John and Paul understood the immense power of their bully pulpit as members of the Beatles. As McCartney later noted, “We knew that if we wrote a song called ‘Thank You Girl’ that a lot of the girls who wrote us fan letters would take it as a genuine thank you. So a lot of our songs—’From Me to You’ is another—were directly addressed to the fans. I remember one of my daughters, when she was very little, seeing Donny Osmond sing ‘The Twelfth of Never,’ and she said ‘he loves me’ because he sang it right at her off the telly. We were aware that that happened when you sang to an audience.” (Lewisohn, The Beatles: Recording Sessions, p. 9) With “Drive My Car,” McCartney moved beyond romantic love to depict a female character who is comfortable being herself and not waiting for any man to validate her existence.

Kessler: Paul McCartney said that on Rubber Soul, the group had “written some funny songs — songs with jokes in.” Certainly, “Drive My Car” produces a chuckle. Do you see “Norwegian Wood” in that same vein, or is it, from your perspective, a bit darker?

Womack: McCartney liked to refer to these songs as “comedy numbers,” which I’ve always found rather charming, given that the comedy is largely sexual in nature. “Drive My Car” and “Norwegian Wood” are not humorous songs, per se, but rather, compositions in which the male characters discover, somewhat belatedly, that they’ve been had. In the case of “Drive My Car,” the female character is all business, all the time. The song is loaded with sexual innuendo, with “baby, you can drive my car” being one of Paul’s more obvious come-ons. The same can be said for “Norwegian Wood,” which is somewhat playful at the beginning: “I once had a girl, / Or should I say, / She once had me.” By the end of the song, the female protagonist has, quite literally, laughed out loud at the male narrator, who very obviously pines for a sexual liaison, only to find himself consigned to a night alone in the bath. The latter song may very well be darker, especially with McCartney’s suggestion that the narrator has committed arson, having woken up alone the next morning.

Kessler: Finally, Ken, what don’t we know about “Drive My Car”? Is there anything you’d like to share with us about this late 1965 LP-opener?

Womack: To my ears, “Drive My Car” is the finest example of the Beatles’ performance of “plastic soul,” the phrase from which the Rubber Soul LP draws its title. As Beatles fans well know, at the end of the first take of the raucous “I’m Down,” Paul famously described the band’s sound as “plastic soul, man”—an ironic reference to the sonic textures of American rhythm and blues that the Beatles had become veritable masters at emulating. From their earliest days together, the Beatles—four ethnically homogenous Englishman—thoroughly imbibed American R&B and remade it in their own image. “Drive My Car,” with its funky, blues-oriented sound, epitomizes the ways in which Rubber Soul acts as the group’s valentine to their American rock and roll roots.

To learn more about the work of Dr. Kenneth Womack, including his new book, John Lennon 1980 and his “Everything Fab Four” podcast, go to https://kennethwomack.com/