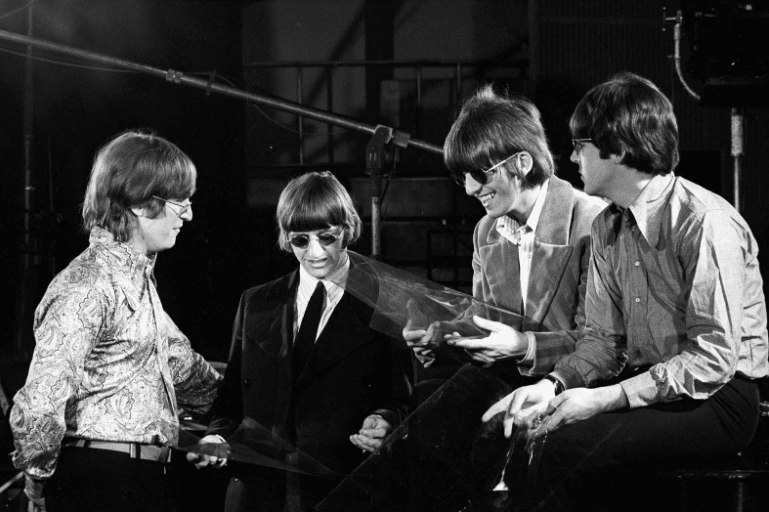 If Frank Sinatra is correct and “success is the best revenge,” then surely “talent is the best weapon.” And for The Beatles, their ever-emerging and morphing talent was exhibited most effectively in their 1966 album, Revolver. Revolver shattered almost everything that fans and critics had come to think of as “classic Beatles.” It launched us all into an era of new sounds, new techniques, new topics and ideas. Even the LP’s clever title conjured up myriad novel images:

opinions pivoting as the world revolved from comfortable “she loves you” yesterdays to thought-provoking “tomorrow never knows” futures.

Opening up and provoking thought: That is exactly what The Fest for Beatles Fans blog will be doing over the next 16 months as we begin to explore the genius and artistry of Revolver, track-by-track. We will study each song in depth and ask our own Fest authors and experts to share their insights into the 14 songs of 1966 that introduced us all to “the studio Beatles.” We will examine these innovative tunes and lyrics with the help of Bruce Spizer, Jay Bergen, Christine Feldman-Barrett, Dr. Kit O’Toole, Laura Cortner and Dr. Bob Hieronimus, Erin Torkelson Weber, Bob Wilson and Don Jeffries, Debbie Greenberg, Susan Shumsky, Ivor Davis, Melissa Davis, Bill King, and me, Jude Southerland Kessler.

Each month, I will research and present what the Beatles music experts have to say about “who played what and how and when and where” on that month’s selected track – presenting that information in our “What’s Standard” section of the Fest Blog. Then, the innovations of each song will be covered in the “What’s Changed” section. Finally, I’ll interview a guest Beatles author/expert, asking that individual to answer 4 in-depth questions about “the song of the month.”

We’ll begin this study in February with a look at “Taxman.” Guest Expert Bruce Spizer, who recently released the already best-selling book The Beatles Rubber Soul to Revolver, will kick things off. Already, Bruce and I are both hard at work, preparing the blog for you. We’re hoping that the information we uncover will provide a “Fresh New Look” at a song that may have been penned by George Harrison (with some help from John Lennon) but took all four Beatles to perfect. We hope we can serve up some food for thought about the exciting opening track on this great LP.

Because that, after all,  is the theme of Revolver. It was, in essence, the modern “shot heard round the world,” signaling freedom from past convention in favor of a “band-new,” independent  beginning. It was the decisive break between the stage band we had come to love so dearly and the studio band that would amaze us (no maybe) over and over again – with songs that would be almost impossible to be performed on a stage. Revolver encouraged us to stop, pay attention, and listen…very carefully. And over the next 16 months, that is what we will do.

The Fest for Beatles Fans cordially invites you to join us in this trek through the best music of 1966, brought to you via the genius of John Lennon, Paul McCartney, George Harrison, Ringo Starr, and the magnificent sound artists led by Sir George Martin at EMI studios.

Soon, we shall begin. Stay tuned.