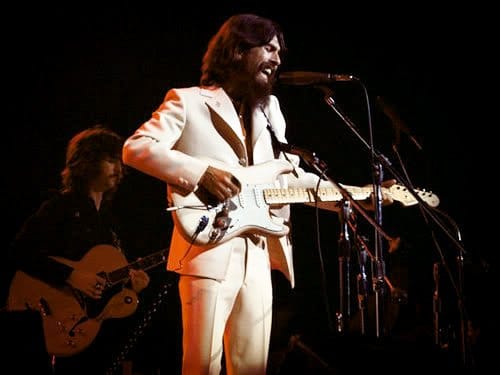 FEST FOUNDER MARK LAPIDOS’ THOUGHTS ABOUT THIS CONCERT AND THE ALBUM, WHICH WAS RELEASED 48 YEARS AGO TODAY

July 31, 1971, I cut my West Coast vacation short by one day, to take the Redeye back to NYC to attend the Concert For Bangla Desh on August 1, 1971 at Madison Square Garden. I went to the afternoon performance. The excitement of seeing a Beatle (2 actually) on a U.S. stage for the first time since their breakup was mindboggling! And it all happened because George’s friend Ravi Shankar asked for some help. George said yes, called a few friends and created the blue print for all benefit superstar concerts that followed. To this day, it is the greatest concert I ever attended! Walking out into the teaming rain, which nobody seemed to be a bit bothered by it, after we just witnessed, I announced that this will win the Grammy for Album of the Year! It was supposed to be released almost immediately to raise more money for the cause, but Capitol and Columbia records to over 4 months to come to an agreement (to use Bob Dylan’s performance on the record). That delay caused it to not be eligible for that year (as it turned out , that was a good thing because it would not have beaten out Carole King’s Tapestry album. But my prediction came true as it did win Album of The Year in 1972.

But I wanted to talk about its December 20, 1971 release. I was working at Sam Goody Record Store in Paramus, NJ. A dear friend and log time FEST contributor, Al Sussman, also worked there (that is where we met). I was the Record Manager at that time and I ordered 600 copies. The buyer was surprised. He called me to explain that it would be a very expensive album, with a list price of $12.95 he thought fans may not spend that kind of money. The store price was set at $12.79 as there was very little profit for any stores as it was for charity. I told him I was certain it would sell like crazy. We got word that the truck should be arriving at 3:00PM. The lines were almost out the door in this huge store. The only time I ever went to the loading dock in my years there was that day. I had Al waiting for me at the back door service entrance where we had the line begin. I watched the truck door open and there was the entire pallet in front of my eyes. Uncontrollably and unplanned ,I leaned in and gave the pallet of Albums a big hug!! I was opening the boxes as it went down the hallway to the store so Al could begin to hand them out immediately. That moment was so electric. To see the excitement of fans so eager to purchase this amazing three records of absolute history. Between 3:00PM and 10:00PM, we sold an astounding 252 Copies. We had to reorder more copies within 2-3 days. The rest is history. It did go to #1 and stands at the top of the mountain of the world of great charity album since.  Thank you, George.

On a side note, I had been  playing Here Comes The Sun on guitar for 22 months and could not get it right. Then I saw George (with Pete Ham) perform it live  and saw they used a capo on the 7th fret to get that sound! I went home and must have played it half the night.What a difference. To this day, at the end of each FEST, after all the packing is finished on Sunday night, and the sound of Beatles music can still can be heard with Festers playing in the lobbies and other places around the hotel, I come over, strap on a guitar with the capo in 7th position, of course, and I close the event playing Here Comes The Sun with a family of Beatles people joining in with many guitars, lot of singers harmonizing, that unique hand clapping George created during the middle eight, and into that uplifting finish. For me it is always a highlight of the weekend.