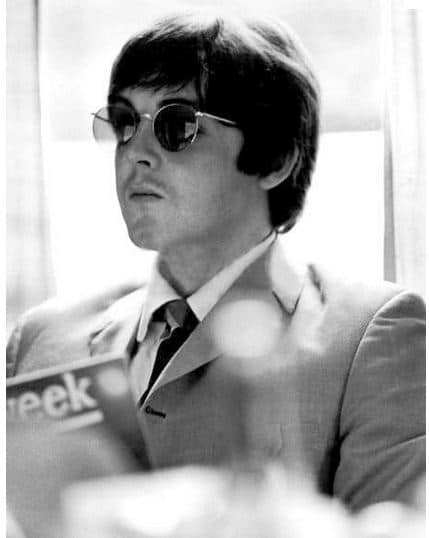 As we continue looking at Side Two of Revolver, we thought it might be fun to compare and contrast two of Paul’s love songs…we’d love to hear from you about the similarities and differences you perceive!

Revolver is a Paul-centric LP. No doubt about it. It is the first of The Beatles’ LPs in which Sir Macca (and not the former “Leader Beatle,” John Lennon) dominates,  singing, and thus having composed, six of the 14 tracks. (Really, seven, if you count his predominate influence on “Yellow Submarine”).

John Lennon was the real-life “Ancient Mariner.” Like Coleridge’s weathered protagonist, Lennon always grabbed you by the elbow, and began to tell you his tragic life’s story. In “I’ll Cry Instead,” his BBC cover of Smokey Robinson’s “You Really Got A Hold On Me” (to which John adds the telling word, “Mother”), “If I Fell” or “I’m A Loser,” John is consistently bemoaning about Julia’s absence in his life and his consuming heartbreak over her loss…or perhaps, as he sees it, his inability to keep her.

“Beatle Paul” is just as thematically consistent. From early on, he composes songs about his struggling (and later, failing) relationship with Jane Asher. On Side One of Beatles For Sale, he reminds Jane in “I’ll Follow the Sun” that:

But tomorrow may rain, so I’ll follow the sun.

One day, you’ll know I was the one,

But tomorrow may rain, so I’ll follow the sun.

And now the time has come,

And though I lose a friend, in the end you will know…”

Then, on Side Two of Beatles for Sale, he tries a tougher tack, saying in “What You’re Doing”:

“You got me running…and there’s no fun in it…

Why would it be so much

Over and over, in “We Can Work it Out,” “You Won’t See Me,” and “I’m Looking Through You,” Paul sings to Jane Asher of his frustration, of  his need for her to “be there” for him. In fact, our Fest Blog examined that theme earlier this year when we studied the lovely “Here, There, and Everywhere.”

Now, here on Revolver’s Side Two, Paul speaks to Jane again, first in the uplifting “Good Day Sunshine” where he praises her for being with him on a sunny day, and then in the dark and poignant ballad, “For No One” and finally, in the brass-accompanied riot that is “Got to Get You Into My Life.” All three Side Two songs express Paul’s longing, in meter and verse, for his lady.

“Got to Get You Into My Life” – though admittedly a double entendre – a crafty nod to Paul’s use of marijuana – is in a basic, literal sense his mission statement.

“And then, suddenly, I see you!

Did I tell you I need you?

Every single day of my life!”

Song after song, ballad after ballad, Paul has been telling Jane (and hence, all of us) one thing: “Got to get you into my life.” And, the fact that Jane has justifiably resisted and sought her own very successful theatrical career has only inspired Paul to continue penning attention-getting poems set to music for her.

By 1966, however, it has become fairly obvious to them both that the relationship isn’t working. In fact, when Paul begs her to come home, “she takes her time and doesn’t feel she has to hurry…she no longer needs him.”  They’re at irreconcilable odds, really.

Perhaps, a clue to their unresolved issues is to be found in the way in which “For No One” was recorded. Because the entire song is Paul and only Paul. George and John are not needed. Ringo will play percussion…but Paul alone – the center of attention – will sing and perform his composition on the Steinway grand. Perhaps that is why for Jane Asher:

“… in her eyes, you see nothing,
No sign of love behind the tears
Cried for no one…

A love that should have lasted years.”

With the wrong instruments, “For No One” could have come off as “whiny and cheesy.” Instead, the composition (with the phenomenal clavichord work of Sir George Martin and the breath-taking French horn touches of Alan Civil) is elegant and deeply tragic on several levels. Because not only are Paul and Jane falling apart, but The Beatles are beginning to unravel as well.  When we hear those last words: “There will be times when all the things [they] said will fill your head. You won’t forget [them],” we somehow flash to the eroding friendship between John, Paul, George, and Ringo. We sigh.

And so, in the guise of his former, chipper self, Paul makes one last attempt on Revolver to woo Jane back again. Not discounting the very popular “marijuana theory” (which certainly exists on one level), in “Got to Get You Into My Life,” Paul expresses undiminished determination to get Jane into his life. He jauntily and emphatically speaks to her in hopes that the visions prevalent in “For No One” will never come to be. McCartney sings:

When I’m with you, I want to stay there!

And you know I’ll never leave…and if I do,

I know the way there!”

Here interestingly, Paul speaks his soul to Jane in an ear-catching new way, via a SOUL song! As Dr. Kit O’Toole, author of Songs We Were Singing: Guided Tours Through The Beatles Lesser Known Tracks has stated:

“The horns [in “Got to Get You Into My Life”] were a remnant of the band’s original idea to record Revolver at Stax Records in Memphis. They had long emulated the bass and drum sounds found on American soul records, and they wanted to extend that. So they recruited guitarist Steve Cropper of Booker T. and the MG’s to produce Revolver, and they asked Brian Epstein to “make it happen.” But all the Memphis studios wanted exorbitant fees to host The Beatles, so the boys ended up back in Abbey Road. But the soul sound still intrigued them, so “Got to Get You into My Life” is their interpretation of the genre.”

“Got to Get You Into My Life” is one of Paul’s final attempts to catch Jane’s ear and to express his soul’s need for her lifelong companionship.

“You want her, you need her…

And yet you don’t believe her

When she says her love is dead:

You think she needs you.”

Both “Got to Get You Into My Life” and “For No One” are the swan songs for a love that could not survive. However, on 15 May 1967, when Paul met Linda Eastman in London’s Bag O’Nails, his long-deferred dream became reality. He got her into his life, and in that moment, everything changed.