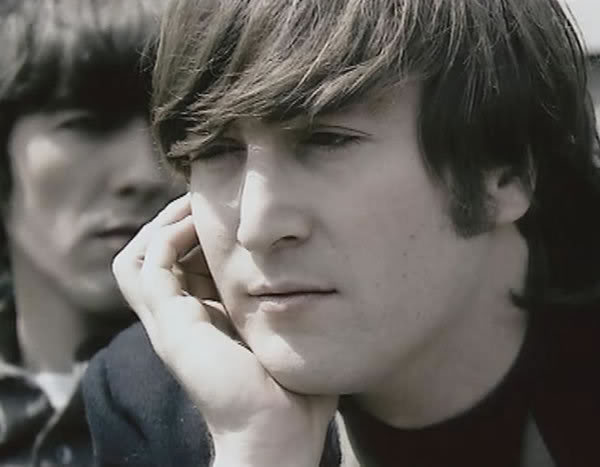 Anyone who considered John Lennon lazy didn’t know John well. John “worked smart, not hard,” but he worked without ceasing. Even while piled up in bed with his many pillows and guitar, John was never indolent. He was composing songs, listening to the telly for ideas, reading and scribbling notes on a sheet of paper — discovering concepts that he would later put to use.

His Aunt Mimi had taught the boy to create: to “Do something productive, John!” (whether that “something” was writing, composing, meditating, reading, listening, or absorbing). And the place where John was most creative was in his room. In his early Hamburg days, John wrote about this topic in There’s A Place. He sang:

So where did he retreat to live inside the mind, to be inspired? Well, for John, that place where dreams could translate into beauty was always found in bed. Even as a little boy, John sat on his bedspread above the Mendips’ glassed-in porch and cut out dancing paper skeletons, illustrated his “Sport and Speed” serial stories, and sadly, sang himself to sleep. Bed was his retreat, the place where he could imagine.

So, in 1966, when he penned “I’m Only Sleeping” for Revolver, John created not a bored and listless throw-away number but a powerful and ironic song. The irony falls upon the word, “ONLY.” John cheekily saying to us, “I’m only writing a great poem.” “I’m only building something magical.” “I’m only composing.”

What Lennon is doing in his room – in his bed – is bigger than “running everywhere at such a speed.” He’s chosen the higher road; he’s chosen to stop, breathe, think, and create. And wonderfully, John’s letting you and me into his half-awake, half-asleep realm: The Land of Incredible Ideas.

For the first time in a long time, John turned to “our kid,” to his little brother (as it were) George, to help him bring this dream realm to life. In EMI Studio 2, John and George began the song’s recording, softly playing acoustic guitars in the key of E minor. They performed a bit faster than John wanted the song to be recorded, making it possible for George Martin to slow and mellow the sound, post-recording. (1)

But that wasn’t all…George Harrison had something special up his sleeve. He announced that he had composed a lead melody line intended intentionally to be played backward. More specifically, Harrison composed this line so that the tape could be run backwards and then and then only, the tune that George wanted to hear would emerge. (2)

But there’s more: Not only did Harrison play this line once on his guitar, but George played it again using his Gibson SG run through a fuzz box – varying the lines very slightly so that when they were played together they produced a blurry, ethereal sound. Dreamlike, unreal.

So if we’re being totally honest here, “I’m Only Sleeping” isn’t just a John Lennon creation, it’s a Lennon/Harrison composition…a superb collaboration that well exceeds their early endeavor, “Cry for a Shadow.”

For those out there who still see this complex song as a nod to the escape world of sleep, you’re also right! In 1966, John was suffering from what today we would diagnose as “clinical depression.” He had all the symptoms. He had gained weight; he was lashing out at Cynthia, the other Beatles, and the EMI staff. He was bored with everything and recklessly displeased with everything. John seemed to have lost interest in the world around him. Therefore, he retreated more and more often into the altered world of drugs and the magical, shadow world of sleep.  On a literal level, that explanation of his mood does exist in this song.

But “I’m Only Sleeping” is about so very much more. The key to its depth and meaning can be found in the lyrics.  In “Tomorrow Never Knows,” when John is singing about merely escaping reality, he “turns off his mind, relaxes, and floats downstream.” But in “I’m Only Sleeping,” he intentionally says,

“When I’m in the middle of a dream
Stay in bed, float up stream…”

Float up stream? Notice here that John’s fully-engaged and actually moving against the current. He’s willing himself to progress, to achieve, to be inspired…and to turn inspiration into music. Surely, that’s not escape, is it? No, this is something else.

“I’m Only Sleeping” mattered to John. He was very particular about the way he wanted it to be recorded. When he heard the initial playback of the song, John asked that Paul be taken off the vibraphone. Instead, John wanted Paul returned to his Hofner bass, to render that mellow, soft, wistful quality that you hear between the lines. John wanted to “make it dreamier and more mystical sounding.” (3) Paul was even instructed to yawn around Minute Two.

What John was trying to recreate was “the place” where he could go when he was low, when he was blue. He was, uncharacteristically, inviting us in. John Lennon was admitting us into his inner sanctum. That was and still is quite a privilege.

But instead of being honored, many music critics and fans criticized the song and the singer. They pointed fingers at him and called him slothful.

“No good deed goes unpunished,” John often smirked. Then, he retreated to bed, to the kingdom of imagination. And glaring, he closed the door.

1. Guesdon, Jean-Michel and Margotin, Phlippe, All The Songs, 328 Rodriguez, Robert. Revolver: How The Beatles Re-Imagined Rock’n’Roll, 101. The voice was over-dubbed and sped up while the rhythm track was slowed down.

2. Emerick, Geoff. Here, There, and Everywhere, 124 and conversation with Geoff Emerick, May 2016. Emerick is very clear about the fact that George really struggled to record this bit for the song making the recording session “one hard day’s night.”

3. Guesdon, Jean-Michel and Margotin, Phlippe, All The Songs, 328 and Rodriguez, Robert. Revolver: How The Beatles Re-Imagined Rock’n’Roll, 130. Rodriguez’s work is a “not to be missed” book on Revolver.

One thought on “Only Sleeping?”