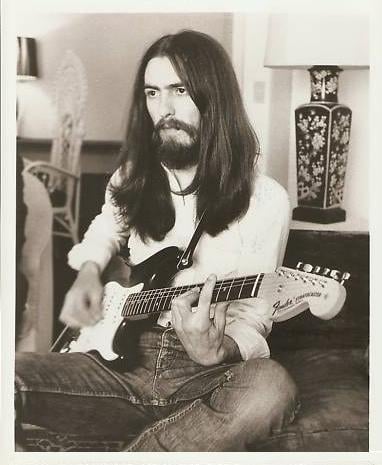 Paul Simon depicted this season best: “…and the sky is a hazy shade of winter…”

Yes, even in generally sunny and mild Louisiana, this afternoon, it was a crushing 22 degrees. Almost as soon as the sky brightened, it fell back into darkness. These are short and bitter days: full-on winter.

Yet, in the midst of this unbearable cold, I read in my gardener’s journal that I should be out planting. I’m late putting in kale. My pansies are long overdue. And, if I want daffodils, jonquils, or tulips for spring, they must go into the frozen ground this week. I need to dig out my gloves and spade, bundle up, and get to work. But in the freezing darkness, I must admit, I have little motivation.

Then, I think of George Harrison. I think of George in those dim and sunless days after The White Album, when (for the most part) his genius was ignored and his contributions to The Beatles, largely overlooked. It was “the winter of [his] discontent,” but in those seemingly barren days, instead of despairing, George began planting.

When John and Paul shrugged him off and pushed their own projects forward, it would have been easy for George to doubt himself. It would have been reasonable for George to buy into the attitude that he was “second best.” (Or third best, as it were.) Instead, continuing to believe in himself and in his ability to be fruitful, George used that fallow time to begin writing “My Sweet Lord,” “Isn’t It a Pity?” and “What is Life.” Fully confident that “it’s not always going to be this grey,” George began quietly preparing for a bright harvest that would shock those who had swept him aside.

He began penning, editing, and improving the songs that would – almost two years later – grace his double GRAMMY-nominated (for “Best Album of the Year” and “Best Single of the Year”) album. He began creating All Things Must Pass. In a very dark time, George quietly tilled the fertile soil of his imagination, carefully planting seeds that would flourish into that triple-album bearing the greatest creative work of his career.

In a wry twist of fate, had The Beatles embraced George’s plethora of compositions during 1968 and 1969, the accomplished Harrison would not have compiled the elegant and varied catalog that fills All Things Must Pass. As music critic Ritchie Unterberger adeptly observed, the album was filled with “[George Harrison’s] backlog of unused compositions from the late Beatles era.” Indeed, the “shadowy winter” that engulfed George’s last two years as a Beatle was necessary; it furnished a quiet time for him to create a genius solo album.

And so, like George, I resolve to plant. I resolve to make the most of an uncomfortable, bleak, and lonely season. Instead of letting darkness defeat me, I resolve to use it as an instrument to come back stronger, more vibrant – full of fragrant blooms.

I wish you a time for planting, too. I wish you a New Year full of quiet moments in which to plan and grow. May every season of 2018 be used to good purpose…even the most frozen moments that seem to have no potential. George found them a blessing. May we as well.

Listen to George’s title track, “All Things Must Pass” here…