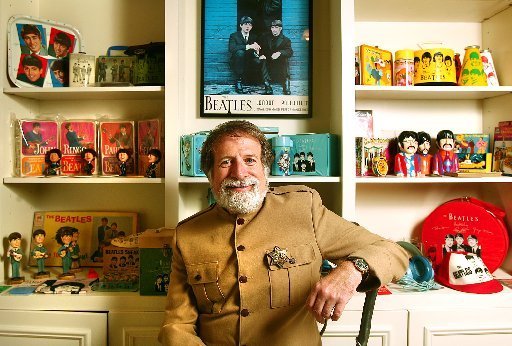 In case you missed the really big celebration in Beatlefan magazine (“Beatles, Roaches Launch a 20-Year Journey”), on Sirius radio, and on podcasts such as the “She Said She Said” show on BlogTalk Radio, the Fest for Beatles Fans’ own Bruce Spizer is being lauded and applauded across the nation. It’s his anniversary!

Over the last 20 years, Bruce has built a reputation as the most respected Beatles music expert in the world, or as the Fest family fondly refers to him, “The Beatleseffin’pedia.” Despite the fact that he is a very busy New Orleans tax attorney, Spizer has written nine books establishing his well-deserved creds as the “go to guy” on the Beatles recordings, records, and record promotions. He has covered almost every aspect of Beatles music history in these distinguished volumes:

The Beatles Solo on Apple Records (2005)

Beatles for Sale on Parlophone Records (2011)

Never intentionally setting out to write a book, Bruce’s personal investigation into authentic 1960s Beatles pressings (when his record collection was destroyed and needed to be replaced) revealed a wealth of intricate information. The more Bruce learned in his quest, the more convinced he became that there was a need for an accurate, detailed book covering The Beatles on the Vee-Jay label – and on the intricate legal battle surrounding the company’s dealing with the Fab Four. Therefore, in 1998, he published that very book. And in doing so, Spizer started a tradition that will not slow or stop. His books are requested…in fact, popularly demanded…by knowledgeable Beatles fans who want to learn more.

Almost the second his Vee-Jay book hit the stands, Fest goers were “wink-wink-nudge-nudging” Bruce with, “So, when’s the Capitol book coming out?” And once Spizer had given them “the Capitol book,” his readers (and they are many…his books have grossed $2 million since their inception) were clamouring for “the Apple book.” For Spizer, there was no resting on one’s laurels. He had to keep writing.

In 2007, Spizer released a volume that he was certain would tie up all loose ends, covering (he thought) every remaining shred of information about Beatles recordings – everything that he had not previously discussed. One of those topics was The Beatles’ catalogue on Swan records. So cleverly, Spizer entitled this “final, final, infinity final” work, The Beatles Swan Song. Except, of course, that it wasn’t. Spizer may have wanted this definitive volume to be the swan song of his author-itative career, but he wasn’t permitted to relax yet: fans wanted the complete Parlophone story as well. They were insistent that The Beatleseffin’pedia tackle it from A to Zed. So, Spizer did just that, releasing in 2011, Beatles for Sale on Parlophone Records.

Yes, it is…it’s clear that Beatles fans and music aficionados can’t get enough of the painstaking detail which Bruce Spizer provides. He hunts down myths about Beatles music and summarily dispels them. He speaks with primary sources, such as Walter Cronkite (who wrote the Foreword for The Beatles Are Coming!), and he sets right past errors. Bruce has said on many occasions that, “A worthy book about The Beatles can’t be a mere collection of quotes and facts from other previous works patched together…a good book must provide new research and cover new territory.” And that, Bruce has done.

But there’s more to Bruce’s story…the personal side…because for those of us who call The Fest for Beatles Fans our home, Bruce is family. Well-known for his Saturday noon Main Stage kick-off presentations and his Friday night panels with Al Sussman, Tom Frangione, Chuck Gunderson, and many others, Bruce has always been integral to The Fest…a tradition we all anticipate and enjoy.

It was at the 2004 New Jersey Fest that a novice author named Jude Southerland Kessler listened intently to Bruce’s speech and then went up to ask him about The Quarrymen’s 1957 competition at the Liverpool Empire against (amongst other skiffle bands) The Sunnyside Skiffle group. “Mr. Spizer,” I wondered, “I know that the lead singer for The Sunnyside Skiffle group – who defeated The Quarrymen that day – was energetic Nicky Cuff. But who were the other members of the group?” At that moment, Bruce Spizer did two things that impressed me tremendously: First, he admitted he didn’t know. (Many experts would have “bulled their way” through with a flimsy answer.) And secondly, he suggested that I get in touch with Radio Merseyside and ask them for assistance with my mission.

So, I did. I e-mailed Radio Merseyside and explained that I was writing John Lennon’s biography in narrative form and needed to know a bit about each member of the vivacious, charismatic skiffle band that had bested the ingenue Quarrymen in June 1957. I explained that, if possible, I needed to speak with someone from the band: to discover exactly why the earliest version of The Beatles had fallen short that fateful day. Well, Radio Merseyside did what Bruce knew they would do. They ran a contest to “Help the American Author” – and happily, that contest ended in a direct overseas call to me from Nicky Cuff himself!

As I chatted with Cuff – the leader of the band who’d taught John Lennon that rock’n’roll involved much more than just singing a song – I finally understood the old adage, “The bigger they are, the nicer they are.” Cuff was quite gracious. And though there was nothing “in it” for him, well-established author, Bruce Spizer, had also been extremely generous. He’d taken time to help an unknown. He helped me uncover information I truly needed, despite the fact that he didn’t know me or my work.

Bruce’s brilliant notion of ringing up Radio Merseyside came naturally, of course, because that is exactly the kind of in-depth scholarship he regularly practices. It’s Spizer’s “extra mile” – the path he consistently takes to uncover little-known facts.  Indeed, his thorough, comprehensive, “no stone unturned” research has always met with great respect from his fellow authors and with admiration from the fans and readers as well. For the last twenty years, we’ve all said, “Good on yer, son!” Moreover, we’ve continued to ask for “More, more, more!”

So today, Bruce, we salute you on this 20th anniversary and look forward to the books to come. You simply can’t stop now! As John would say, “Y’er on a rock’n’roll!”