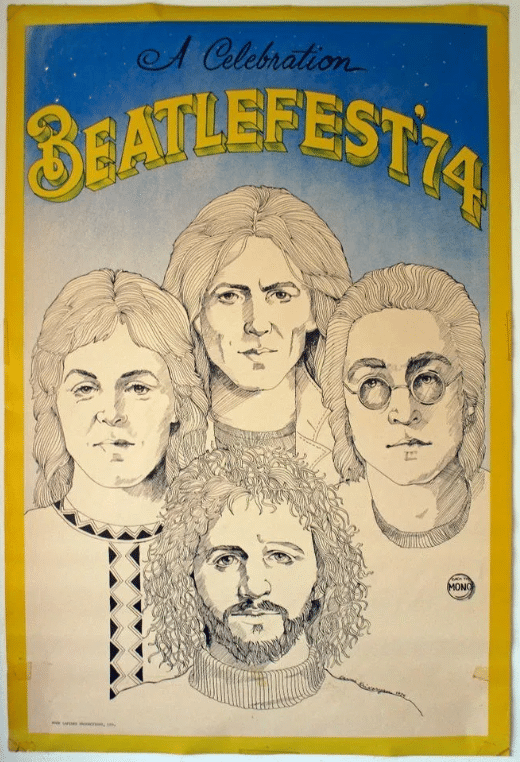 SEPTEMBER 7, 1974 – 45 YEARS AGO THIS WEEKEND: We opened the doors to the first Beatlefest at the old Commodore Hotel on 42nd St, in NYC and Beatle fandom changed forever!!! I couldn’t possibly know at the time, because it was only a one convention idea! But, the public spoke and we listened! I can remember so clearly that Saturday morning. I was so nervous it made me sick. Not knowing what was going to happen, and how it will work out had caught up to me that morning. The program sheet was just printed the day before! The convention was set to start at 1PM.

At around 11AM, the doorbell to the suite rang. It was Tony King, VP of Apple and their official representative, who arrived with the films and the signed musical instruments from John, Paul and George. Ringo had sent signed drumsticks a few months beforehand. We chatted a bit before he took out 6 signed copies of The Penguin John Lennon book of his poetry. John wanted them to be auctioned off for the charity he designated – The Phoenix House Foundation (a drug rehab organization in upper Manhattan). He then took out a 7th book that John signed for me, with a wonderful inscription and some doodles, beginning with To Mark, September Beatlefest 1974! I was now coming out of my funk a bit.

It was Tony’s next utterance that lifted any anxieties or fears out of my being. He said, “John wants to come down tomorrow to pick the winner of his guitar.” I don’t remember my exact response, but this was a dream come true to the max! To say I was thrilled beyond belief is a major understatement!! I think I jumped up and told Tony I need to get ready to go downstairs. I arranged for John’s entrance through the kitchen and into the balcony overlooking the Grand Ballroom and had a microphone set up just for him. A NYC policeman who, by the rarest of coincidences, happened to be a childhood friend, who had come over to congratulate me, helped to make this happen. 1:00PM was upon me and I was on my way down to the ballroom. I stopped at the balcony floor, maybe 5 minutes after the doors opened and I looked out over the ledge. That moment in ingrained in my brain forever. I gazed at the completely and totally jammed packed ballroom full of Beatles fans and that it was I who had come up with this crazy idea. My energy level shot up to 100% and never stopped the entire weekend. Quick side story: The films were almost ready to start when someone asked me about the projectionist. A blank look come over me as that was a detail I hadn’t thought of. I can’t make this stuff up. At that moment in through the door a union projectionist comes in and said his boss read about the event and we were showing films. He said, “where do I go?”, and without a moment’s hesitation, I pointed to the projection area and off we went. John changed his mind and chose to go to his farm in upstate NY on the Sunday, but he was interviewed on that Saturday, and he mentioned me and the event (Lisa Robinson /Circus Magazine).

From this acorn of an idea, grew into an annual event here, and 3 years later in Chicago, plus ten other cities around the country over the years – 132 FESTS and counting! What we (my family and many who are like family to us) have created is like a Beatles Thanksgiving for many thousands of fans on any given weekend. This is the true joy of what we do!