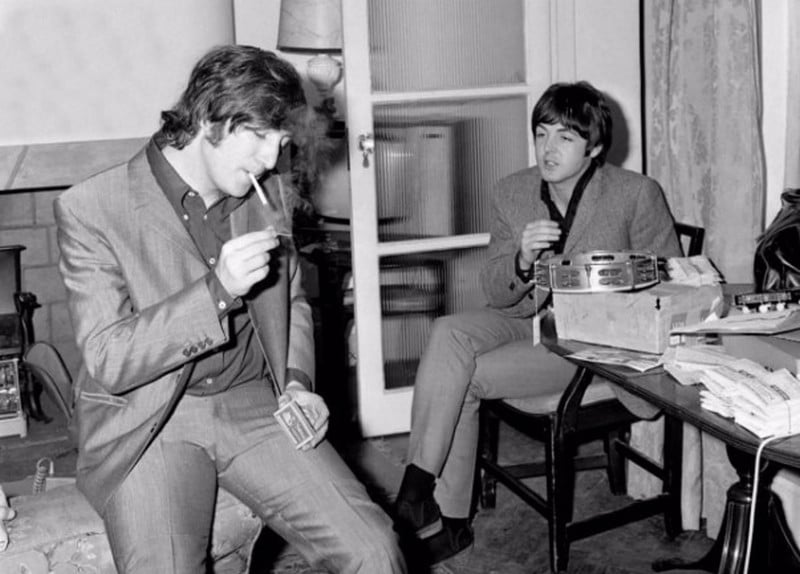 Side One, Track Six

They Said “The Word,” and They Were Free

The Fest for Beatles Fans blog continues to mine the riches of The Beatles’ brilliant 1965 LP, Rubber Soul. This month, Sara Schmidt, author of Happiness is Seeing the Beatles: Beatlemania in St. Louis and the up-coming study of the North American Beatles Fan Clubs, Dear Beatle People (to be released, August 2021) joins Jude Southerland Kessler, author of The John Lennon Series, for a fresh, new look at a landmark song on this LP, a song considered to be a turning point for The Beatles: “The Word.”

Second Engineer: Ken Scott (and Richard Lush, according to Margotin and Guesdon, All the Songs, p. 290)

Stats: Recorded in only three takes. However, myriad superimpositions were needed to complete this song.

Ringo Starr plays drums on one of his Ludwig Oyster Black Pearl “Super Classic” drum kits. Some sources say Ringo (and not John) plays the maracas.

This month, we’re thrilled to have Sara Schmidt with us to give us a fresh approach to this song we’ve known for 56 years. Sara and her mother, Coral Schmidt, who have been coming to the Fest for 19 years, are integral members of the Fest Family.

Sara has served as a part of the Historians Panel since its inception. And besides being the author of the sold-out work, Happiness is Seeing The Beatles: Beatlemania in St. Louis, Sara is also the creator of the esteemed website, https://www.meetthebeatlesforreal.com which introduces us to ordinary people who have actually encountered The Beatles. Sharing vetted stories and rare photos that are not well-known to the general public, these fans bring a new dimension to what we know about John, Paul, George, and Ringo. They talk about events not covered in other sources.

Sara is a five-time guest speaker at the Beatles at the Ridge festival in Arkansas, and she is a contributing author to A is for Apple, published by Apcor. Sara’s second book, unfolding the fascinating story of the North American Beatles Fan Clubs — Dear Beatles People — will be released in August of 2021. We’re excited to have her with us for this in-depth discussion of “The Word.”

The concept of love and being loved has been a theme throughout John’s musical career. Many of his songs written during The Beatles’ period and afterward were inspired by the greatest loves of his life: his first wife, Cynthia; his mother Julia; and his second wife, Yoko.

The B-side to John’s famous peace anthem, “Give Peace a Chance” is a haunting song sung by Yoko called “Remember Love.” Yoko wrote most of the lyrics, and John recorded this song with her during the Montreal Bed-In for peace. In this song, Yoko’s lyrics say, “love is what it takes to live.” This is exactly the message found in “The Word.”

During the silent vigil held in Central Park in New York City one week after John’s murder in 1980, there was a young girl seen sitting on the shoulders of a young man. This unknown girl was holding a sign high above her head that said, “Remember Love.” Her sign stood out among the crowd because it was a message that was always in John’s heart, and one he began singing about in “The Word.”

Much like Yoko’s song, “Remember Love,” John wrote the song simply titled “Love” in “the spirit of Love.” In “Love” he tells us that “Love is free” and in “The Word” he says to say the word “love,” and “you’ll be free.”  “The Word” is about love, in a broad sense, while “Love” is talking about the love between two people. However, in both songs, John is informing the listener about the important aspects of one of the most important things on earth: love.

Another song that follows this theme is 1973s “Mind Games.” It is in this song that John states: “Love is the answer.” In “The Word,” the concept of love is almost a question. What is this word that John is speaking of? He them informs us that the word is “love.” There is no questioning in “Mind Games.” Love is the answer, and John knows that for sure. As “Mind Games” fades out you can hear John singing, “I want you to make love, not war. I know you’ve heard it before.” The message of love is one that he had written about many times, and it all began on Rubber Soul with “The Word.”

In 1979, John made a demo of another song that he wrote called “Real Love.” In 1995, Paul McCartney, George Harrison, and Ringo Starr took that demo and made it into a brand-new song by The Beatles. In this song, John admits to having some confusion when it comes to love: “Thought I’d been in love before/but in my heart I wanted more.” He also shows some confusion about love in “The Word” when he writes “In the beginning I misunderstood/but now I got it the word is good.” In both songs, he comes to the conclusion, once again, that love is the ultimate answer.

One way that he and Yoko Ono achieved this was via the “peace acorn” project in 1969. The couple sent 50 pairs of acorns to heads of state all around the globe, in hopes that they would plant them in a gesture of world peace.  Many of the leaders had never heard of John or Yoko, but still planted the acorns. The idea was that something very big can grow out of something very small. This was a gesture, rooted in peace and love, meant to show how a little bit of love can light up the entire world.

John and Paul got together after their 1965 North American tour and smoked some marijuana.  Then, they sat down and wrote “The Word,” which John had mostly composed. Usually, the songwriters wrote the lyrics to their songs on a sheet of whatever paper they would find around the house or hotel room they were writing. This time was different. For the first time, they wrote the lyrics on a multicolored sheet of paper.

Late in the summer of 1966, Yoko knocked on Paul’s door at 7 Cavendish Avenue in London. Paul had never met her before, but he let her in, because at that time he would frequently welcome strangers into his home. She was there because of avant garde composer, John Cage’s, upcoming birthday. Cage collected rare music manuscripts, and several of his artist friends wanted to give him original manuscripts from a variety of noted musicians as a special birthday present. Yoko was hoping that Paul would give her something that he had written to be included in the gift. Paul did not want to give away any of his work, because he had been keeping it for his own personal memories.  However, Paul told her that his friend, John might be willing to part with something, and he gave her John’s address in Kenwood.

History is ambiguous about what happened next. Most sources merely state that Yoko was given the original lyric sheet for “The Word,” on the multi-colored paper. We do not know if Yoko received the lyrics in person from John or whether she received them from NEMS at John’s request, but in some form or another, they communicated prior to their official meeting in November 1966. John Cage published the lyrics in the book Notations along with other manuscripts from modern musicians. In 1973, John Cage donated all of the manuscripts he owned to Northwestern University library.  That is where the manuscript for “The Word” remains today. Fans can see a high-quality facsimile of the original whenever the library is open.

“The Word” has always been one of my favorites from Rubber Soul. From those first beats, it is easy to tell that you are going to be listening to a song with a strong rhythm. The harmonies of John and Paul sound wonderful! Those things have always made me want to stop and take a closer listen to the message, more than I did with earlier Beatles songs.

“The Word” has some religious overtones in the lyrics. This is not surprising because it was written in the Autumn of 1965, the same time period in which Maureen Cleave conducted her famous interview with John. John was reading quite a bit about religion and Christianity during this time in his life. In fact, in Cleave’s article, she stated that John had recently purchased an “enormous Bible,” and it was one of the things he most fancied. He most likely read John 1:1 that says: “In the beginning was the Word…” To John that meant that in the beginning, there was love. As a Christian believer and a Beatles fan, this really resonates with me. Love has been a huge force in mankind from the beginning of time.

Ringo Starr said that “the basic message of The Beatles is love.” This is a big part of why I love The Beatles so much. One of the most important things we can do, especially right now after everything we’ve been through this past year, is to spread love to everyone we meet. It is time to look past the color of someone’s skin, who they love, how much they weigh, how much money they have, and who they voted for and to simply show love to one another. The Beatles sang about this very thing in the song “The Word.” This song is an uplifting and positive reminder that “The Word is good.”

There’s power in the words we say. We can change the course of someone’s day by a rude comment or even a rude message on social media. If we remember that “The Word is love,” and take that to heart, maybe we can use the words we say to uplift and spread love.

For more information on Sara Schmidt and her books, head here

[1] Not only does Beatles Guru Mark Lewisohn, in The Complete Beatles Chronicle, p. 205, refer to this song as “John’s song, ‘The Word,’” but John himself stated to David Sheff in The Playboy Interview with John Lennon and Yoko Ono, “‘The Word’ was written together [with Paul McCartney] but it’s mainly mine. You read the words, it’s all about gettin’ smart. It’s the marijuana period. It’s the love-and-peace thing. The word is ‘love,’ right?”