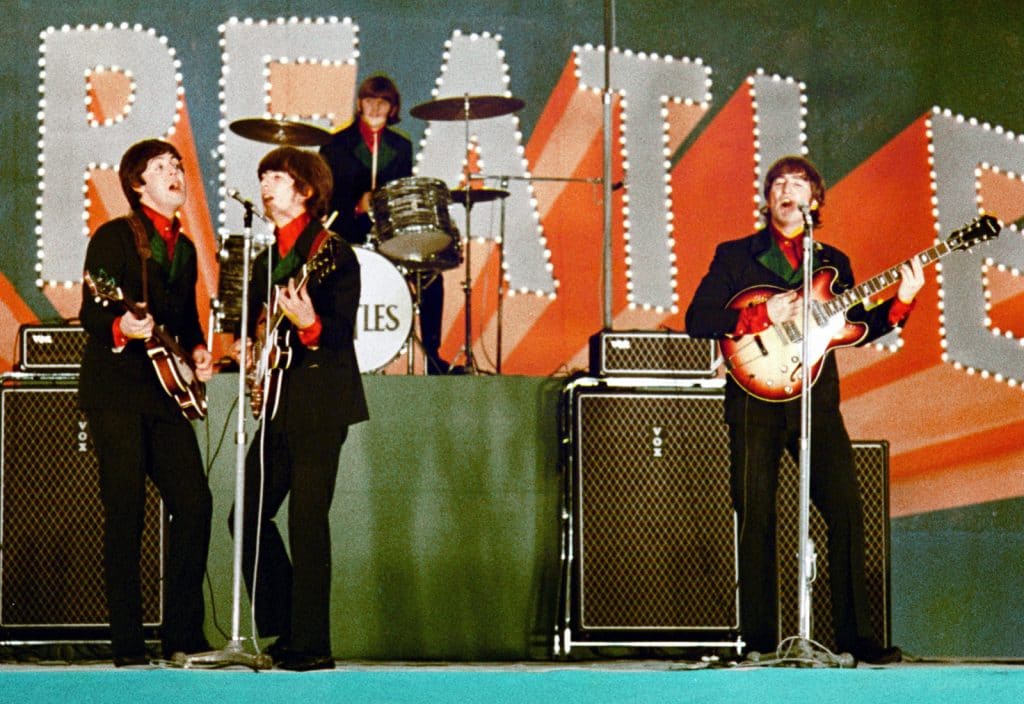 With a reputation for an unequaled “work ethic,” The Beatles were also cognizant of the considerable worth of play. Their six-hour-gig Hamburg days were laced with equal amounts of raucous fun. And their lengthy North American tours included opportunities to fish, drive race cars, ride horses, meet celebrities, party around the pool, and take in films with Hollywood stars. Their most serious of Beatles recording sessions regularly included an oldies jam or two, plenty of “inside quips” and jokes, and their fair share of laughter. The boys never forgot to sleep, read, take in the arts, and refresh themselves with “mini-breaks” (short holidays). For some reason, most of The Beatles’ inspirational moments and occasions to celebrate occurred in their Julys together. Let’s look in…

In 1964, the lads donned their finest and kicked up their heels at the London and Liverpool premieres of “A Hard Day’s Night.” in London, after the film opening, the boys partied with their parents and significant others in the elegant Dorchester Hotel. And in Liverpool, motoring slowly through a 12-mile, 8-row-deep crowd of adoring Scousers (including John’s lifelong mate, Pete Shotton, and Paul’s school master, Dusty Durbin), The Beatles were awarded the keys to the city at Town Hall. In a throng unrivaled in fervor, the Liverpool boys were welcomed home. That evening, at the Northern film screening, John called out from the stage, asking where his family was seated. Once the various Stanleys were located and greeted, he smiled broadly and permitted the ceremonies to commence. These were giddy, happy days for John, Paul, George, and Ringo as the fruits of their labors paid off in critical acclaim and box-office gains. Having worked “liked a dog” all spring on the film, The Beatles’ smiled, waved, and enjoyed the show!

Then, just for fun, the boys performed an aerial ballet at the Palladium’s “Night of a Hundred Stars.” Instead of showcasing and promoting their latest hits, the Fab Four were hoisted in mid-air where they cavorted for a delighted crowd. July 1964 was, indeed, a time of frivolity…and all of it was well-deserved.

During The Beatles’ residency in Japan, the four decided to spend their off-stage moments creating a large collage, with each Beatle creating one part of the whole. Having studied at Liverpool College of Art, John’s segment of the piece, “Four Images of a Woman,” was superb, and the other Beatles were enthralled by the work as well. Photographer Roger Whitaker, watched the boys collaborating on the project and exclaimed, “I never saw them calmer…they were working on something that let their personalities come out! I think it’s the only work they ever did together that had nothing to do with music.” Whitaker observed that the collage — so foreign to what The Beatles did normally — truly rejuvenated them. He reflected that The Beatles didn’t even play music or talk as they painted; they concentrated in silence. “They’d stop,” he remarked, “go do a concert, and then it was, ‘Let’s get back to the picture.’” In the midst of a hectic, pressing tour, the four made time to unwind.

On a mad whim, The Beatles jetted off together, on holiday in Greece. They chartered a yacht and following the coast of the mainland, spent their days island hopping. Accompanied by Mal, Neil, and several others, the boys danced, laughed, and attempted to buy an island together, in hopes of creating a “Beatles paradise.” Although Brian thought the purchase a ridiculous notion, The Beatles located a plot of land and initiated purchase negotiations. Yet before “t’s” could be crossed and “i’s” dotted, paperwork-wise, the four friends were back in England and back at work. Sadly, the island project fell by the wayside. However, the freedom and passion the lads had enjoyed during their “search for the illusive Eldorado” (see the poem by Poe) had rejuvenated them all for the days ahead.

By July of 1968, tensions were challenging John, Paul, George, and Ringo, both as a group and individually. John was under fire from the press for his relationship with artist, Yoko Ono, and Paul had been shockingly seen in public without Jane Asher. Rumours flew. That’s when a moment of sheer fun stepped in to save the day! The cartoon film, “Yellow Submarine”, was completed, and to satisfy the press, a small launch party was hosted at Bowater House, in the Knightsbridge section of London. Paul, George, and Ringo were on hand, finding great relief in the opportunity to chat and smile. Then, mid-month, (17 July) all of the boys enjoyed the “all-stops-out” London premiere of “Yellow Submarine” in Piccadilly Circus. The gala was reminiscent of the “Hard Day’s Night” and “Help!” premieres, in happier times. Indeed, as The Beatles rolled up in their limousine, Beatlemania erupted — full-scale! — once more. The crowds and the boys were mutually elated. For a moment, the magic was back.

As far as I know, none of The Beatles (not even voracious reader, John) were fans of American poet, Walt Whitman. But had they been, I think they would have admired his quote: “Do anything, but let it produce joy.”

Having fun with their talent was always foremost in The Beatles’ minds, and when an endeavor — such as touring — ceased to be fun, they discarded it. Even during the Let it Be sessions, you can watch the four friends having fun…singing the old Cavern songs, dancing, and making each other laugh. They knew how to find joy in the grubbiest places, worst circumstances, and most trying times.

All of us have been enduring extremely grim conditions for months now. We’ve struggled and bravely, we’ve forged on. But with what is left of July, let’s agree to join John, Paul, George, and Ringo in finding a bit of fun. Let’s take a break in the midst of our masterpieces, cautions, and concerns…and for just a moment, “Let it Be.” Smile, walk, paint, party, sing, sail, dream…and perhaps, even buy a frivolous island or two. Do anything! But let it produce joy!