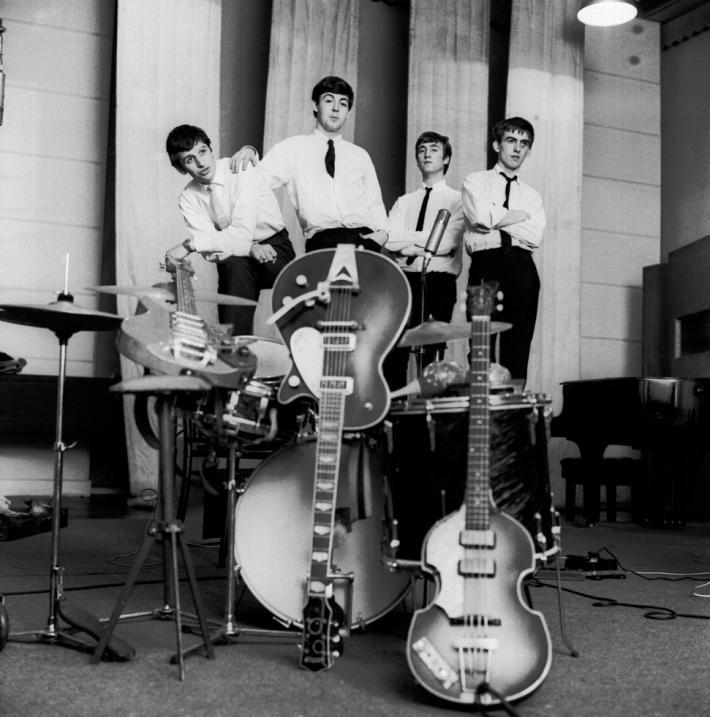 “If you have built castles in the air… that is where they should be…now, put the foundations under them.”

In this second installment of The Fest Blog’s study of The Beatles’ time together, month-by-month, John Lennon Series author, Jude Southerland Kessler, examines what the lads did during 5 fab February’s. As we walk winter’s weeks together, what can we learn from John, Paul, George, and Ringo? And how can that change the course of our own lives?

February 1963 – During one of the coldest U.K. winters on record, the shivering Beatles set out on tour with lovely, little Helen Shapiro, playing dank theatres and music halls in a concerted effort to propel their names and songs to the British public. But on the 11th, they took one day off from their rigorous schedule to race down to London, where they would record their very first LP, Please Please Me. With brilliant producer George Martin at the helm, alongside engineer, Norman Smith, and second engineer, Richard Langham, the boys — desperately ill with colds and flu — began work around 10 a.m. First, they recorded several fondly familiar songs from their old Cavern Club days. Then, as the morning gave way to afternoon, they tackled original tunes for this LP that Epstein hoped would propel his lads to the top of the charts. In the autumn of 1962, The Beatles had had a hit with “Love Me Do” and a Number 1 with the new LP’s title song, “Please Please Me.” However, to maintain that momentum, now they had to produce a host of songs proving their versatility, creativity, and star power. And they did! In only 12 hours, John, Paul, George, and Ringo produced a record that would stand the test of time. And when, at 10:30 p.m. that night — weary and shaking with fever — John Lennon tackled the performance of “Twist and Shout” for the pot-boiling close of the record, he gave history one of his finest tracks…in only one take! The LP was complete. Never had a group compiled a record of such magnitude in only one day. The Beatles had worked their way into stardom.

February 1964 – Landing at John F. Kennedy Airport to ecstatic screams that eclipsed jet engines, The Beatles stepped onto American soil on 7 February 1964, and began “The British Invasion.” In only two days, they were slated to play The Ed Sullivan Show. And despite the fact that George Harrison had contracted flu, the four “mop-tops from Liverpool” rose to the occasion. On Sunday night, 9 February, they sang into the cameras for the largest television audience in history (at that time), and instantly, their names became both legendary and household. Then, moving rapidly by train to Washington D.C.’s exhilarating Coliseum-in-the-round performance and up to the Big Apple’s fabled boards in Carnegie Hall, The Beatles made history! Without stopping to breathe, they flew on to sunny Miami for two more Sullivan appearances, while wooing the U.S. public via press conferences, interviews, photo opportunities, and phone chats with a plethora American DJ’s. In 14 days, The Beatles did the work of months, and then nearly exhausted, they winged their way back home to begin filming the oh-so-aptly-dubbed “A Hard Day’s Night.”

February 1965 – One thinks of the exotic Bahamas as a vacation locale, but in Feb 1965, The Beatles landed in Nassau to off-the-chart screams for the making of their new United Artists’ film dubbed “Beatles 2” and later, “Eight Arms to Hold You,” and finally, “Help!” Rising daily at 6:30 a.m. for hair and make-up, The Beatles worked on set from 8:00 a.m. to 5:30-6:30 p.m. each day, and in the evenings, frequently gave interviews to journalists such as Larry Kane, Derek Taylor (who, in 1965, was with KRLA, Los Angeles), Long John Wade, and others. John Lennon, additionally, was completing the work on his second collection of prose and poetry, A Spaniard in the Works. Prior to winging their way to the Bahamas, the boys had spent hours recording many of the songs for the film’s soundtrack, but additional work was yet to come. So, taking full advantage of their few nights off, the lads enjoyed a bit of time with Jim and Angie McCartney and their daughter, Ruth, and with George’s sister, Louise — all of whom were on location. As always, however, industry ruled the day. Even in paradise, The Beatles were working.

February 1967 – It wasn’t just another “Day in the Life” when, on 10 February 1967, The Beatles oversaw the orchestral recording of the final bars of the final song of their new LP, Sgt. Pepper’s Lonely Hearts Club Band. That evening, 40 classically-trained musicians arrived at EMI Studios, Studio One, to take part in the cataclysmic close to a song that frequently is listed as the best in The Beatles catalogue. Instructing the gifted musicians that he wanted “a musical orgasm,” producer George Martin requested a sound that gradually ascended and intensified before crashing in an E major chord…a sound burst. Throughout February’s weeks, the lads had been working diligently in Studio Two, recording various other songs for the LP (including the title track) and creating videos in Knole Park for their upcoming single, “Penny Lane” and “Strawberry Fields.” But on the 10th, with Paul McCartney and George Martin alternately conducting the small “Day in the Life” symphony (gathered in what would eventually be known at “Abbey Road Studios”), another musical moment in time was captured forever, compliments of The Beatles.

February 1969 – January had ended with a rooftop concert that was, for all intents and purposes, the swan song of The Beatles. So, February was for all four boys, a time of re-invention. Ringo began work on his new solo project — a film with Peter Sellers entitled “The Magic Christian.” John, knee-deep in various avant garde happenings and recordings with Yoko, took time out to return to London’s Trident Studios to record “I Want You (She’s So Heavy)” for what would eventually be the Abbey Road LP. George Harrison, in a bit of personal maintenance, had his tonsils removed at University College Hospital, London, but later in the month, he returned, full-throated, to EMI to record demo tapes of “Something,” “Old Brown Shoe,” and “All Things Must Pass.” Still infuriated by the late-January suggestion by John, Ringo, and George that Allen Klein should manage Apple and 20 percent of their personal incomes, Paul took immediate steps to ensure that the firm of Eastman and Eastman were appointed as Apple’s General Council, carefully supervising Klein’s management. However, Paul and Linda still found time to attend the release party for Mary Hopkins’s first LP (which Paul had produced), Postcard. In February 1969, each of The Beatles was discovering his new métier, and without a moment’s rest from the demands of Beatledom, they were exploring their chosen horizons.

The one quality that always distinguished The Beatles from other groups was their unfailing willingness to get up early, work late, give more than expected, and produce more than anticipated. They were, in short, driven. Their Februarys together bear this theme out, again and again. The Beatles never once shied away from rolling up their custom-made shirtsleeves to build “castles in the air” from rough brick and real mortar. They created enduring edifices by demonstrating to us all that lasting dreams require unflinching dedication and industry.